This article takes a brief look at global wheat supplies and the potential impact it will have on the new season for the domestic market.

INTERNATIONAL PERSPECTIVE
Global wheat supplies have been reduced, primarily on lower production forecasts for Kazakhstan and Iraq, offsetting higher estimates for Argentina and Australia (Table 1). Projected exports for the United States and Mexico have decreased for the 2018/2019 marketing year, while EU and Brazil exports have increased. The EU’s recently improved import competitiveness is expected to increase for the remainder of the marketing year. 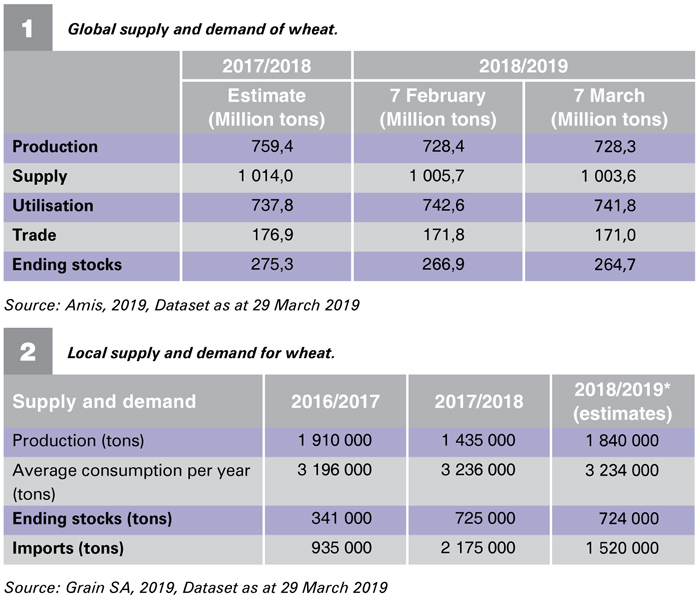 Global imports have been raised for a couple of countries including Algeria, Morocco and Philippines, while decreased for Bangladesh, Mexico, Venezuela and EU. World consumption has been reduced, with most losses accounted for India. Global ending stocks for 2019 have been forecasted to decline by 3,9% due to the downward adjustments done by Asian countries and lower inventory levels in Argentina. 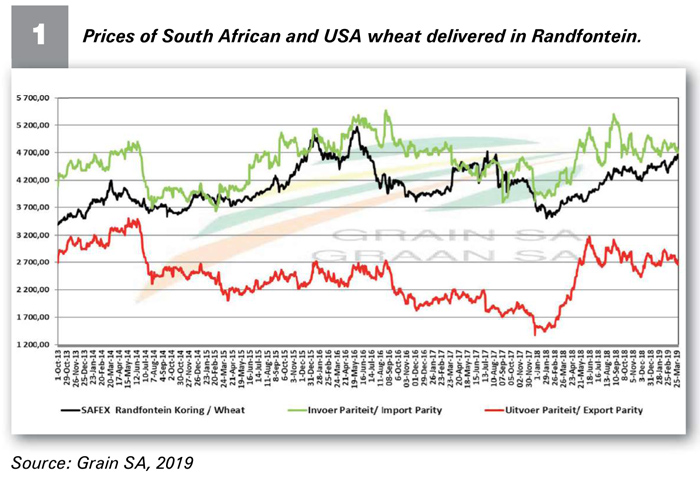 LOCAL PERSPECTIVE
Compared to the 2017/2018 marketing year, 2018/2019 has been a good year for winter cereals, having somewhat recovered from the drought of the year before. With planting season for winter cereal underway, the 2019/2020 marketing season promises to be a good one for the winter cereal growing regions. Weather has been favourable over the past few months with above normal rainfall occurring over most parts of the winter rainfall region, while some areas had normal rainfall or dry conditions.

Looking back, wheat production for the 2017/2018 marketing season took a dip (Table 1) due to the drought that hit the Western Cape region, however we have seen a good come back in the 2018/2019 marketing year with production that went up by about 30%, and this includes new-planted areas in the Free State. With an average consumption of about 3 million tons per year, South Africa is a net importer of wheat as it produces far less than what is needed for consumption. On average South Africa imports about 1,5 million tons of wheat per marketing year. However, during the 2017/2018 marketing year imports increased by about 57% compared to the season prior.

In anticipation of the new season, since South Africa remains a net importer we need to look at factors that influence local wheat prices. Firstly, the supply of global wheat, the more wheat produced worldwide, the lower the prices will be, and the less wheat produced worldwide, the higher prices will be. Secondly, cost of wheat from country of origin, which then ties in with the rand dollar exchange, which influences the cost at which wheat can be imported (import parity); the weaker the rand the more prices are supported and the stronger the rand the more pressure on prices will be.

CONCLUSION
The global market seems to have sufficient wheat supplies and as a result, international wheat prices could remain under pressure for another season. Looking at factors that affect local wheat prices South Africa, as a net importer of wheat could also remain under pressure, regardless of the production situation in the domestic market, however a continued weaker rand could be beneficial to the market.