Plant breeders rely on the genetic variability of a plant population (referred to as germplasm) to be able to improve it. The way in which improvement is achieved, relies on several factors, usually dictated by the method of reproduction of the crop being propagated.

Wheat is a self-fertilising crop and as such the first step usually involves the crossing of two parents that were selected due to desirable attributes. The progeny are then subjected to several cycles of selection until pure breeding lines are obtained (usually by the 6th or 7th cycle) at which time material can be bulked-up and advanced line testing can be conducted – eventually leading to the selection of an advanced line that can be released as a new cultivar.

Selection is therefore at the heart of the breeding process and can be defined as the process in which the breeder consciously retains certain individuals with sought-after traits, while eliminating those that do not conform to the model ideotype. Selection can be based on desirable visually identifiable traits (known as the phenotype), such as size, colour, taste or some other qualitative trait, or they can be identified after data gathering and employing statistics to identify the sought after individuals containing the desired trait(s). Traits which fall into the first category are called qualitative traits, and are usually controlled by single major genes, while the second category consists of quantitative traits, usually controlled by several genes with minor effects.

Quantitative genetics is the study of continuous traits (such as height or weight) and their underlying mechanisms. It is effectively an extension of simple Mendelian inheritance, in that the combined effects of one or more genes, the environment in which they are expressed, and the interaction between the environment and genotype give rise to distributions of phenotypic values. The latter are also termed quantitative trait loci (QTL’s).

The success of any selection procedure is based on the ease of identifying the trait in question, it’s heretibility, the selection intensity (how many individuals are retained) and the standard deviation of the population mean. The formula used to calculate the response to selection R is probably one of the most important in plant and animal breeding, and can be written as follows:
R = iσph2; where i = selection intensity, σp = phenotypic standard deviation, and h2 = narrow sense heretability.

Artificial selection on the phenotypes of domesticated species has been practiced consciously or unconsciously for millennia, with dramatic results. Recently, advances in modern biotechnology applications such as molecular genetic engineering (i.e. transgenic technology that gave rise to GMO’s) and molecular markers (i.e. marker assisted selection) promised to revolutionise agricultural practices. There are, however, several strong reasons why it cannot completely replace conventional breeding, but instead rather be integrated in breeding programmes, like so many other available “tools” to breeders and in order to obtain the maximum improvement in the economic value of domesticated populations.

Firstly, the rate of improvement of economically important characters, such as grain yield in maize and wheat, and milk yield in dairy cattle, has been a few to several percent of the mean per year for the past several decades. In wheat, an average annual improvement of grain yield potential of between 1% and 2% is considered as very good.

For various crop plants it has been established that roughly half of this improvement is due to improved husbandry practices, i.e. environmental effects and genotype by environment interaction rather than just improved genetics.

Secondly, most characters of economic importance are quantitative traits, influenced by numerous loci throughout the genome that often individually have small effects. Genes with small effects are difficult to map precisely and there may be practical problems of manipulating polygenes through breeding, once the genes have been identified at the molecular level.

Lastly, single genes of major effect are amenable to genetic manipulation, but in many cases are prone to deleterious pleiotropic effects, i.e. they influence more than one trait at more than one locus. This helps to explain why evolution in natural populations usually proceeds in a Darwinian fashion, by a series of small genetic steps.

The use of phenotypic markers is well-established in plant breeding, and here particular phenotypically visible morphologic or cellular features, which are closely linked to sought after traits, are used to identify individuals in lieu of traits of choice; examples include leaf tip necrosis as an indicator of the Lr34 leaf rust resistance gene or pseudo black chaff as an indicator of the presence of the Sr2 resistance gene in wheat. One of the foremost criteria for a good marker (both phenotypic and molecular) is that it is closely linked to the trait of interest, and that it is easily identifiable, preferably early in the plant growth cycle.

Recently, molecular marker assisted selection (MAS) procedures have become available with which it is possible to identify markers closely linked to genes and some are even gene specific, however MAS is an indirect selection process where a trait of interest is selected, not based on the trait itself, but on the presence of a marker. For example, if MAS is being used to select individuals for disease resistance/susceptibility, the level of disease is not quantified, but rather a marker that is associated, is linked with disease resistance. MAS can be useful for traits that are difficult to measure, exhibit low heritability, and/or are expressed late in plant development.

In a recent article published in SA Graan/Grain by Pakendorf and Smit, the developments regarding breeding of rust resistant wheat cultivars was highlighted, and emphasis was placed on the genetics of the disease causing organism and its interaction with the host – the wheat plant – with specific reference to the ARC-Small Grain Institute’s (ARCSGI) wheat breeding programme in the Western Cape.

In this present contribution, the progress made with breeding for rust resistance will be discussed with reference to conventional selection procedures based on pathotype data related to the rust pathogen; this will be contrasted to MAS data related to the wheat plant, and used to illustrate how these technologies aided in the development of recently released SGI wheat cultivars Tankwa, Kwartel and Ratel.

Stem rust surveys are conducted annually by trained pathologists to assess which stem rust pathotypes are prevalent at any given time and space and it is the task of the breeder to find and incorporate the requisite resistance genes into new wheat cultivars.

Conventionally, the pathologist identifies the pathotype of a rust isolate based on the individual virulence/avirulence profile of the isolate with reference to a differential set; lines containing almost all known resistance genes. By contrasting the symptom expression of the isolate with that of the differential set, the pathologist decides whether a new or an existing pathotype is present. In the absence of a sexual reproduction cycle in South Africa, new stem rust pathotypes develop by mutation, and due to the large number of spores involved and a relatively high mutation frequency (1 X 10-10), a new pathotype which can overcome monogenic resistance develops every three to five years, thereby necessitating the replacement of existing wheat cultivars by cultivars with the necessary new resistance gene combinations.

With this information, the breeder now sets up his programme, in which the appropriate resistance gene(s) is incorporated into the germplasm of the adapted wheat cultivar. This is achieved by manually crossing the two parents, followed by a selection procedure in which the segregating populations are continually exposed to spores of the new rust pathotype, lasting six to seven cycles prior to achieving homozygosity. In the selection process, only the resistant phenotypes are retained while the susceptible ones are discarded. This selection phase is followed by adaptation tests in various environments and finally the release of a new cultivar.

The frequency and changes in pathotype specialisation of stem rust pathotypes was studied and documented by Pretorius et al. (2007) and updated by Terefe et al. (2010), and these are depicted in Figure 1. From this illustration it is clear that new stem rust pathotypes occur with a regular frequency in South Africa, therefore necessitating continuous replacement of old with new and resistant wheat cultivars. 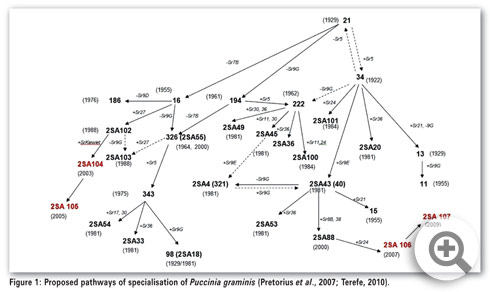 From the above it should be clear that while the identification of the rust pathotype and that of the resistance genes are inferred from the reaction they elicit from a standard differential set, this information is obtained after a tedious and time consuming procedure.

During the development of Tankwa, Kwartel and Ratel, MAS was extensively used as a selection tool.

In Table 1, the MAS results for several stem, leaf and yellow rust genes, four baking quality genes and two plant height genes are displayed. From Table 1, it is clear that the MAS data is specific and more descriptive and thus enables the breeder to make better informed selection decisions based on an unbiased assessment of the genotype, unlike conventional methods which are more labour intensive, prone to error and limited by the plant’s growth cycle.

Depending on the availability of requisite markers, any number of traits can be screened from a single DNA sample obtained from leaf tissue. A further advantage of the molecular method is that the data can be derived from leaves of developing plants, thus making it possible to cull unwanted individuals early in the growth phase, and thereby reducing the number of plants which have to be carried through to produce pure breeding lines.

Clearly, there are also certain barriers to the more general adoption of MAS in plant breeding programmes. Currently, one of the most important barriers for MAS is the cost. Although there are only a small number of reports analysing the economics of MAS versus conventional breeding in the literature, the cost-effectiveness of using MAS compared to conventional plant breeding, varies considerably between studies and crops.

Additional factors need to be considered for cost-analysis:

Finally, the level of integration between molecular geneticists that develop the markers and plant breeders (as well as scientists from other disciplines) may not be adequate to ensure that markers are effectively applied in breeding programmes.

Plant breeding is defined as being both an art and science requiring a broad knowledge base from various scientific disciplines in order to select the single ultimate plant from thousands of potential candidates which will contain all the attributes required by the producer, the miller and baker, and ultimately the consumer. In the process, the breeder is dependent on the assistance of specialists in various scientific fields, also requiring a large monetary, labour and intellectual input over a period which could stretch over many years in order to achieve the ultimate goal.

The advent of molecular technology not only helps to reduce the chance for a misclassification, but could also reduce the time required to develop a new cultivar. Currently, the initial cost of setting up a molecular facility is prohibitive, especially if it is to be used routinely in lieu of conventional breeding methods. However, as the methods and equipment are refined and breeders gain experience in utilising this method more efficiently, these costs may in future be recouped by saving on time as well as human and material resources.

The authors would like to acknowledge the technical assistance of Ms Aletta Eksteen from the SU-PBL in conducting the MAS.