Ug99 is a highly virulent stem rust race, which was first discovered in Uganda in 1999. It overcame the resistance gene Sr31, which at the time was most effective and used worldwide for more than 30 years.

Most of the wheat breeding lines and the cultivars grown around the world became susceptible to this race. Given its potential to spread worldwide by means of windblown jet streams as well as continually evolving to overcome additional resistance genes that are thrown its way by means of newly released cultivars, Ug99 is being considered as a serious threat to global and South African wheat production and food security.

In response to Ug99’s threat, the Borlaug Global Rust Initiative (BGRI) was established in 2005 under the leadership of the late Nobel Peace prize winner, Dr Norman Borlaug.

The main objective of the BGRI was to facilitate collaboration among the global community of wheat and rust researchers and to develop strategies on how to manage this serious disease. This international effort identified effective resistance genes that were subsequently deployed in resistant cultivars in high risk areas such as in Kenya and Ethiopia.

As a result, a cultivar named Robin was developed and released in 2011 after collaborative efforts between breeders at the International Maize and Wheat Improvement Centre (CIMMYT) and the Kenya Agricultural Research Institute (KARI).

Robin became popular in Kenya because of high yield potential and resistance to previously known Ug99 races. However, Robin sustained severe damage in some producers’ fields by stem rust in the 2014 crop season in Kenya.

Race analyses on infected leaves of the cultivar Robin, yielded two new variants of Ug99 (TTKTT and TTKTK). Unfortunately the resistance of Robin has been defeated with the emergence of these new races.

Luckily during the past years, several other stem rust resistant wheat cultivars have been released in Kenya and these continue to be resistant to the new Ug99 variants.

Could they lose their resistance?

To improve the durability of resistance, other alternatives should be explored. A common strategy currently being employed by many breeding companies to increase the lifespan of rust resistance is to deploy cultivars with combinations of two or more race-specific resistance genes. Such cultivars should last longer as it is less likely for a specific race to overcome two or more race-specific genes at the same time.

A second and probably better approach is to deploy cultivars with race-nonspecific adult plant resistance (APR). In this case, many minor genes with smaller additive effects, collectively contribute to resistance and each of these genes is equally effective against all races. Hence, race-nonspecific resistance wouldn’t be defeated when a new race emerges.

Is this strategy of breeding for durable resistance being implemented in South Africa?

Yes, one of the current breeding strategies adopted by the ARC-Small Grain Institute (ARC-SGI) to enhance the longevity of rust resistance in newly released cultivars involves the use of combinations of race-specific and nonspecific resistance genes.

Several lines containing at least two racespecific genes and APR genes are being developed and will be released shortly. These lines will contribute to the development of cultivars with multiple resistance and increased durability in the near future. In many instances these resistance sources are in poorly adapted backgrounds or wild relatives of wheat and may include genes that are linked with negative characteristics such as reduction in grain yield and quality. The main challenge is therefore to ensure that only the desired resistance gene is fixed in the background genotype of the
adapted cultivar.

By means of a pre-breeding programme, backcrossing, in combination with new biotechnological methods, are being used to transfer these desired rust resistances into susceptible high yielding wheat cultivars. As gene pyramiding (combination) through conventional methods is time-consuming, DNA markers are being used in our ARC-SGI programme to quickly determine the presence of targeted gene combinations in a specific wheat line, thereby complementing conventional methods of breeding for rust resistance.

Yes, rust pathogens including Ug99 are not only variable, but they are also mobile. They can spread between places by their windborne spores. They can accidentally be transported from one place to another by sticking to clothes and shoes of people.

Up until the end of 2013, Ug99 variants were confirmed in eleven countries. However, the global rust monitoring system, which was established as part of the BGRI to detect and track virulent rust races such as the Ug99, reported that race TTKSK (Ug99) was detected in Egypt for the first time in 2014.

Similarly, two variants of Ug99 were detected for the first time in Rwanda in 2014 (Figure 1). Thus, during the past 15 years, Ug99 variants have expanded their geographical territory to over 13 countries. To date, one or more of the eleven Ug99 race groups have been confirmed in Egypt, Eritrea, Ethiopia, Iran, Kenya, Mozambique, Rwanda, South Africa, Sudan, Tanzania, Uganda, Yemen and Zimbabwe (Figure 1). 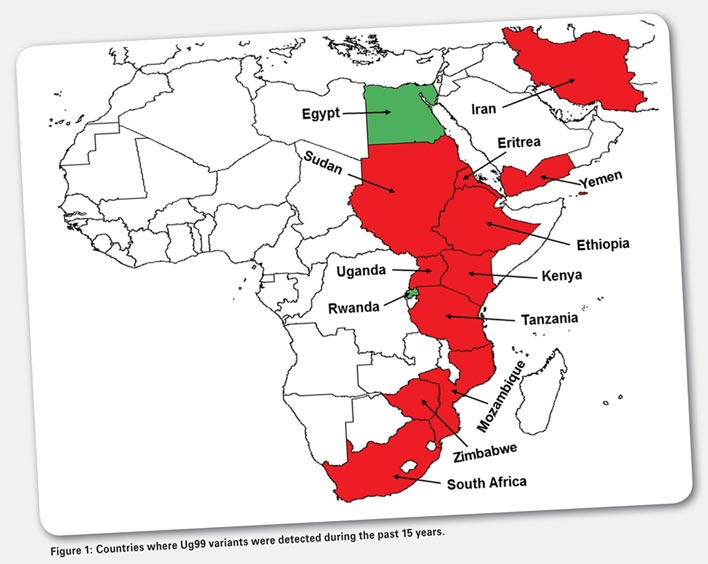 Do we have the tools and expertise in South Africa to allow timeous detection and control of potentially harmful rusts, as is being done by the global rust monitoring system?

Yes, the ARC-SGI is responsible for the Southern African National Rust Surveillance Programme and it is one of only four recognised laboratories worldwide to conduct these surveys. The end-goal of the rust monitoring programme is to predict rust outbreaks in wheat in our region and to act pro-actively. The surveillance programme was launched plus minus 40 years ago and is still able to detect potential outbreaks before they become widespread. Until recently we’ve been identifying rust races based on their virulence on seedlings of differential lines. We have however recently established collaboration with researchers from the University of the Free State, to use the latest developed biotechnology techniques in the genetic characterisation (finger printing) of these rust races in addition to the conventional biotyping methods.

These virulence tests identify races only from viable spores, but the molecular techniques utilise the DNA of spores whether the spores are viable or not, thereby making the process of race identification more accurate and complete.

Any other effort by the ARC-SGI to combat these ever changing rust pathogens?

In an effort to stay ahead of highly virulent races including Ug99 variants that are not yet detected in South Africa, the ARC-SGI has been annually screening South African wheat cultivars and breeding material at the International Stem Rust Screening Nursery in Kenya. As a result, quite a lot of material which are resistant to Ug99 variants and other highly virulent races prevalent in East Africa has been identified. Some of these resistance sources are being used in the breeding programmes in the ARC-SGI as a pro-active intervention.