Africa’s largest maize producer is once again set to regain its status as a net exporter of maize. South Africa, which typically produces an average of 11 million tons of maize, is expected to harvest over 14 million tons this year, recovering from a two year long drought season.

The country’s maize production has generally increased over the years. Contributing to that are good producer practices and favourable weather conditions. An increase in production meant that South Africa could increase its export capacity. Prior to the drought, South Africa exported an average of 1,6 million tons, with the largest export figure recorded in the 2011/2012 season at 2,8 million tons.

South Africa’s exports slowed during the drought season, resulting in the country to import maize for the first time since 2007/2008 season. In fact, South Africa’s maize imports for the 2016/2017 season reached its highest level, recorded at 2,2 million tons. Of this total, 70% is yellow maize and 30% is white maize. Correspondingly, production for the same period slowed to 7,8 million tons, the lowest since the 2007/2008 season.

Despite the shortage seen in the past two seasons, South Africa managed to export maize mainly to its neighbouring countries, exporting more than 1 million tons in the 2016/2017 season. During a good season, South Africa can better compete at deep sea level. Below we shall look at South African exports over the past ten years before the drought.

The top five importers of maize in 2014 consisted of three international destinations: Taipei, Japan and South Korea, with only two neighbouring countries, namely Botswana and Zimbabwe.

Over the ten year period (Graph 1), Zimbabwe is observed to be the most consistent importer, with imports averaging 286 039 tons, which makes up 19% of the average export market share and the largest market share for the South African export market. Japan only showed significant import quantities from 2010, with import lags between 2007 and 2008. 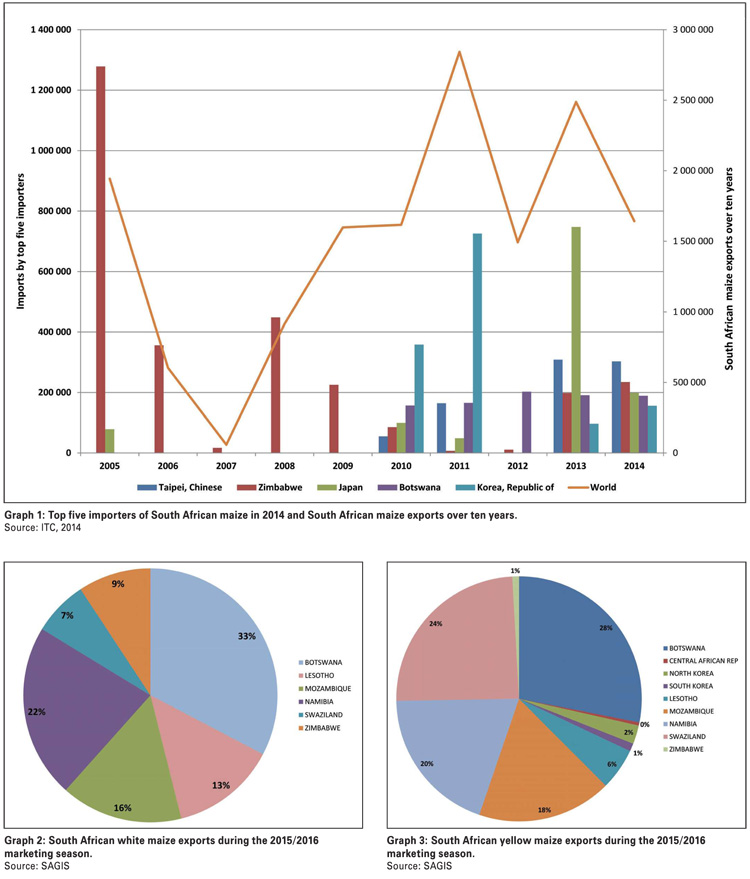 South Korea has been showing volatility on the import quantity, while for the past ten years, Taipei imports showed a positive increasing trend of maize imports, except in 2012 when there was a decline in imports.

Similarly, Botswana also showed an increasing trend in imports, with its highest import intake amounting to 202 539 tons in 2012.

The leading import destination for maize exported in 2014 was Taipei, importing 303 158 tons. Zimbabwe was the second largest importer.

Over the ten year period, Kenya made up 10% of the export market, which is the third largest market share. This was due to the 2009 Kenya imports which amounted to 1,1 million tons and relatively their highest import intake, accounting 69% of South African exports for that year. Generally, Kenya imports are relatively volatile, averaging only 156 696 tons.

In the same period, Japan and South Korea respectively made up 8% and 9% of South Africa’s export market share.

In 2015, South African maize exports declined by 56% as a result of the drought. The 2015/2016 maize production was down by 30% from the previous season, at 9,9 million tons. Given the annual average consumption of 10,5 million tons, imports were required to offset the domestic shortfall.

Looking at the seasonal data, we will now look at how South Africa’s export market changed from a normal year to a drought stricken season.

White maize
For the 2015/2016 season, white maize exports amounted to 473 427 tons (Graph 2). White maize was mainly exported to Botswana, Lesotho, Namibia, Swaziland (the BLNS countries) and Zimbabwe. Botswana was the largest importer of white maize at 33%, followed by Namibia at 22%. Swaziland and Zimbabwe imported least of the white maize crop, accounting 7% and 9%, respectively.

Yellow maize
For the 2015/2016 season, yellow maize exports amounted to 220 001 tons (Graph 3). South Africa exported to nine countries, which was mainly to the neighbouring countries and to South Korea and North Korea.

Once again, Botswana is seen as the largest importer of yellow maize at 28%, followed by Swaziland and Namibia at 24% and 20%, respectively. North Korea and South Korea imported the least yellow maize, each accounting 2% and 1% of the total of yellow maize exported.

Total maize
From the analysed data, it is clear that the drought had a negative impact on the export capacity of South African maize. South Africa could only export to its neighbouring countries, with the South Korean exports declining to a low 2 277 tons. Losing market share at deep sea level is concerning due to the fact that top importers find new sources for their maize demand, such as Brazil or the USA.

Conclusion
South Africa is likely to harvest a record crop estimated at 15,6 million tons in the 2017/2018 marketing season, of which 61% is white maize and 39% yellow maize. This means that South Africa now has an opportunity to regain its status of a net exporter and will be able to compete at deep sea level.

While South Africa was out of the deep sea export market for two consecutive seasons, it is advisable that South Africa focuses on exporting its maize to established markets which showed consistency over the years and countries that grew their import intake. Such countries include Japan, Mexico and South Korea. The benefit of exporting to already established markets comes with a country being aware of certain barriers to trade, understanding the system and seeing it as an opportunity to grow market share. Therefore, South Africa should consider these countries as it looks into export opportunities for the bumper crop. The future potential market opportunities will then unfold as the season progresses.