‘I attribute my success to the fact that farming is all I know,’ was Mr Edwin Thulo Mahlatsi’s reaction on his announcement as the 2017 Grain SA/Absa/John Deere Financial New Era Commercial Farmer of the Year.

He was born and raised a farmer and sees no point in wasting energy on being negative. His success is a result of his knowledge, careful planning, hard work, financial accountability, good health and a wonderful support system like his mentor, and Grain SA. 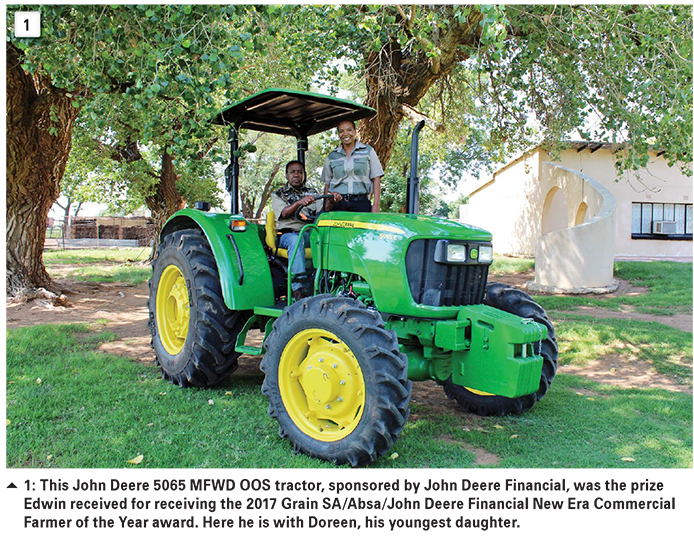 When one door closes, another one opens
Being a farmer at heart, Mahlatsi had to work hard to realise his lifelong dream of becoming a commercial producer. He was born almost 76 years ago, on 2 August 1942, on a farm in the Bothaville district to parents who were both farm workers. Although he did not complete his primary school education, he is considered one of the most knowledgeable farmers in the district.

As he worked on the farm from the time he was a teenager, he accumulated knowledge about anything and everything that had to do with farming.

When the farm where he was raised – which also provided most of his 40 years’ farming experience – was purchased by Mr Frikkie Rautenbach, Mahlatsi stayed on as a farm worker and jokingly says that he was part of the transaction, ‘lock, stock and barrel’.

In 2012, his employer helped him to obtain a lease agreement on the farm through the government’s Proactive Land Acquisition Strategy (PLAS) programme. Rautenbach subsequently made farming equipment, a tractor and inputs available to him on a barter deal. Unfortunately, after passing away in 2014, the equipment landed up in Rautenbach’s estate. Mahlatsi was left with no employment, no implements or income and no production capital.

Even this stumbling block could not stop Mahlatsi from pursuing his dream. Having lived in the Bothaville area for his entire life, he was well aware of the role Grain SA played in agriculture. He set a new plan into action and became a member of Grain SA in 2012 and enrolled in the Grain SA Farmer Development Programme. He also joined the Bothaville Study Group, attended farmers days and completed several training courses which include ‘Introduction to maize production’ and ‘Farming for profits’.

This humble farmer is full of praise for the Grain SA team who assisted him to make the most of his almost 210 ha of good, arable soil. They also supported him to get government funding and showed him how keeping up with the latest farming techniques and agricultural technology can aid him to achieve better results than in the past.

Dreams become reality
The 463 ha farm Swartlaagte, boasting 208 ha of arable land and 255 ha of grazing, embraces a long history for this passionate farmer as this is where he grew up and later worked as foreman. Although he considers livestock as an essential part of successful farming in the Bothaville area, this component of his business represents only about 20% of the farming enterprise in total, as his main focus is on maize farming.

With the grant he received from the Recapitalisation Project of which he was part in 2015/2016, he was able to purchase much needed implements. With his own well-maintained equipment, he can do timely soil preparation, spraying and planting, whilst the harvesting is done by a contractor.

Together Mahlatsi and his neighbour, local farmer and Grain SA mentor, Mr Christiaan Bouwer, tackled the challenging 2015/2016 season with little rain and extreme temperatures. Despite the severe drought Mahlatsi still managed to harvest 250 tons of maize. In the 2016/2017 season, he yielded a substantial 5,5 t/ha.

He believes in working hard and shares this advice with developing farmers: Learn from others who know more before doing the wrong thing; work hard for what you want and always be thankful for that with which God has blessed you with. 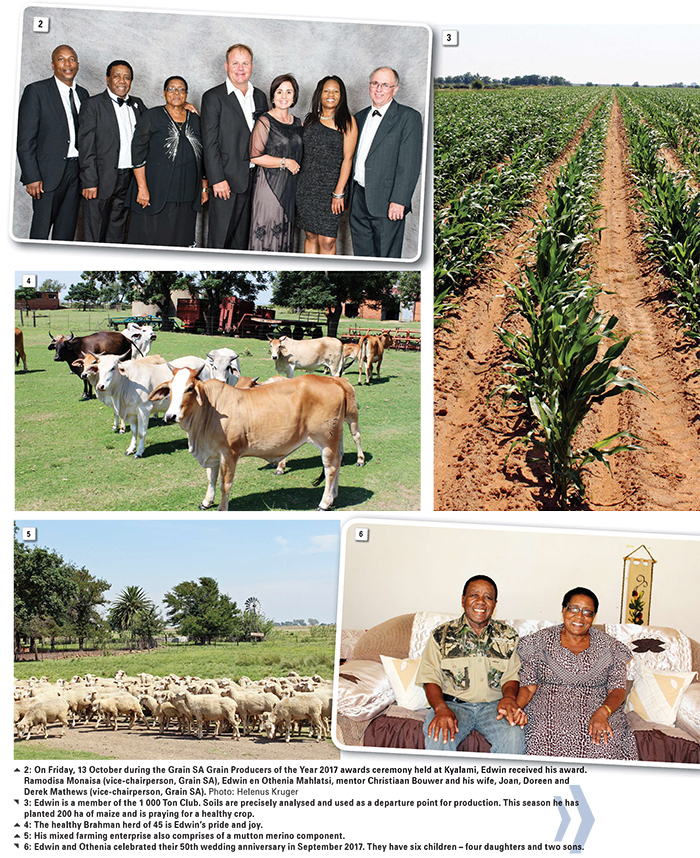 On Swartlaagte teamwork is important and the main driving force on the farm. Early morning briefing sessions are held to plan the day’s activities and to keep his five employees in the loop. His daughter, Doreen, who works for the Emergency Medical Services in Kroonstad, has also become part of this farming enterprise. Whenever she has free time she is on the farm, expanding her agricultural knowledge.

She also joined the Bothaville Study Group and has already attended an ‘Introduction to sorghum production’ course and ‘Farming for profits’, as she is very interested in agriculture. He trusts that she will one day take over a sustainable farming operation from him and that if he cannot get a title deed to the land in his time on Swartlaagte, that it will be part of her destiny.

At 75 Mahlatsi is far from retiring, but realises that he is getting older – although age is just a number. This energetic farmer attributes his youthfulness and positive outlook to the fact that he never used alcohol or smoked and walks closely with God. 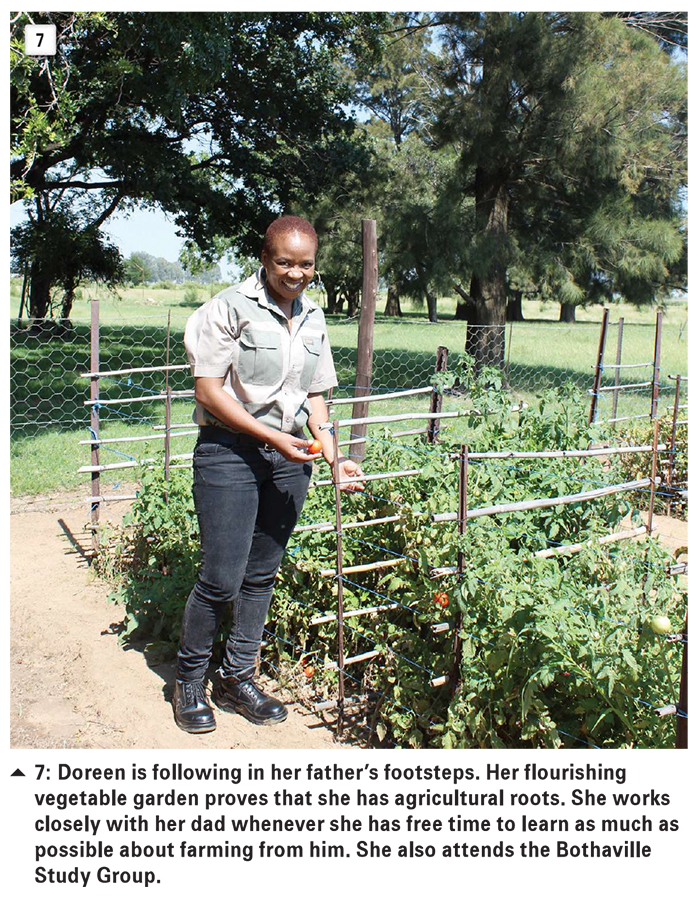 An esteemed winner
The adjudicating panel, who visited his farm in 2017, described Mahlatsi as a very knowledgeable man who has a passion for agriculture. Mr Danie van den Berg (former development co-ordinator, Grain SA), who evaluated this passionate farmer, stated that Mahlatsi has farming running through his veins. Mr Johan Kriel (development co-ordinator, Grain SA) who was the interpreter during Mahlatsi’s acceptance speech, said that the Mahlatsi family are phenomenal people.

About two years ago 16 of his pregnant ewes were stolen and slaughtered. Although this occurrence would have most people hot under the collar, Mahlatsi thought about it and decided that in a way he was helping to feed people. As the cattle thiefs would have to sell the meat for less than market value, many individuals would in that way have food on their tables. He hopes to make a difference in the lives of hungry and suffering people and animals for years to come – preferably not in the same manner.

Zig Ziglar, an American motivational speaker, said: ‘You cannot tailor-make the situations in life, but you can tailor-make your attitude to fit those situations’. This is how Mahlatsi approaches each new day: When life hands out lemons, he chooses to make lemonade.