2017 is referred to as a better year for agriculture, but as a difficult economic and political year. Agriculture is better, due to the rain that has fallen, but grain producers’ challenge has shifted from yield to price.

Very early in the year sparks flew over the question whether profitable production could be sustained at current export parity. It remains a dream. This is how the pendulum swung overnight from a drought year to a wet year. One will not easily experience a normal year in this country.

All of us are grateful for the rain that has fallen and the excellent crops on the fields, but the prices for the new season inundated us like a thief in the night. It is not that we do not know or understand the business, but it would have been great if our joy because of the rain could last a little longer. Jannie du Toit sang in one of his songs: ‘Give and take whatever there is. Gratefully eat each skew slice of bread, that is love.’ 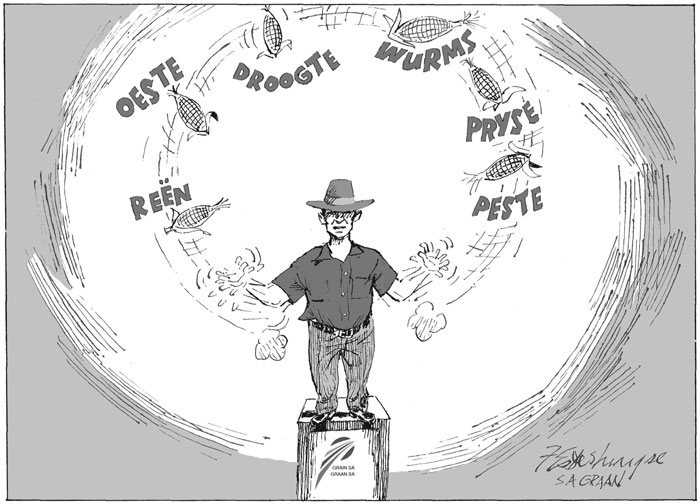 Climate surely is the most unpredictable element in grain production – even the American President is more predictable! The elders taught us that the production conditions in the west determine the crop size. The rainfall in the east is and remains the most reliable, but they do not produce enough food for the country.

The question is whether we can address this challenge with research and technology and whether we should rather achieve it witha combination of production relocations to the Eastern Cape and even KwaZulu-Natal?

The first drought and heat resistant maize seed lines have already entered the country with the assistance of the Department of Science and Technology. Hopefully the scientists will be able to put something on the table before the next serious drought.

There are some days when my thoughts wander back to Egypt in the days of the ten plagues. Just when we thought the drought was over, we are harassed by an army of worms. This type of disaster is hard on the country’s service delivery – this way it is determined whether you are ready to handle crises. I trust that by the time you read this, our scientists would have already identified the pest and that the necessary chemicals would be registered to combat it.

My sincere apologies to the maize producers who went into the new year highly upset about a perception regarding the crop size, for which I was responsible. After all the years of interaction with the media, it remains risky to express your professional opinion in such a way that it is not distorted on the way to its audience.

Grain SA, as organisation, can, however, do very little about the crop size. It is our task to supply the market with the best information at our disposal and leave the eventual decisions to the market participants.