Pigeon pea – a potential crop for food and health security

Food and nutrition security as well as climate change are serious challenges in the world today. However, many production countries are endowed with unique crops that can grow in harsh environments and provide unique nutritional value.

Some of the potentially useful crop species, however, are underutilised and have not been scientifically evaluated and bred as food crops (Padulosi et al., 2002). Among these crops is pigeon pea (Cajanus cajan), which ranks the sixth worldwide in comparison to other grain legumes such as dry beans (Phaseolus vulgaris L.), peas (Pisum sativum L.), groundnuts (Arachis hypogaea L.), soybeans (Glycine max L.) and chickpeas (Cicer arietinum L.).

PRODUCTION
The crop originated in India with the major production occurring in India and Myanmar (83%) ahead of Malawi, Tanzania, Kenya and Uganda as major producers in Africa (14%). In West Africa, pigeon pea is a minor crop, but it plays a key role in the subsistence of smallholders in other countries such as Benin, Nigeria and Ghana. In South Africa, pigeon pea is produced in Limpopo, Mpumalamga, and KwaZulu-Natal in backyards. Moreover, pigeon pea has a huge untapped potential for improvement both in quantity and in quality of production in Africa.

Pigeon pea is a pulse crop that is able to tolerate harsh conditions where other crops such as maize fail. Its ability to withstand drought makes it an ideal crop for smallholder farming. It has a deep taproot system whereby it can withdraw water and nutrients from the secondary level of the soil profile and it helps the plants to survive during periods of water deficit. Similar to most leguminous crops, pigeon pea has root nodules and it helps improve soil quality by atmospheric nitrogen fixation. Due to this, pigeon pea is cultivated in intercropping systems with maize and sorghum leading to reduced need for commercial nitrogen and phosphorus fertilisers.

Neglected and underutilised crops, such as pigeon pea, could play a prominent role in sustaining the livelihood of poor rural African populations by increasing food availability, including protein uptake. In recent years, there has been a continuous and increasing demand for nutritional foods rich in proteins, vitamins and essential minerals. Pigeon pea is among the crops rich in proteins and it has about 18% to 26% with some wild types having protein content of 30% and above. It is also a rich source of minerals such as potassium, phosphorus, calcium, magnesium, sodium and zinc. Generally, pigeon pea contains most of the minerals, as compared to other food legumes such as cowpea and chickpea (Table 1). 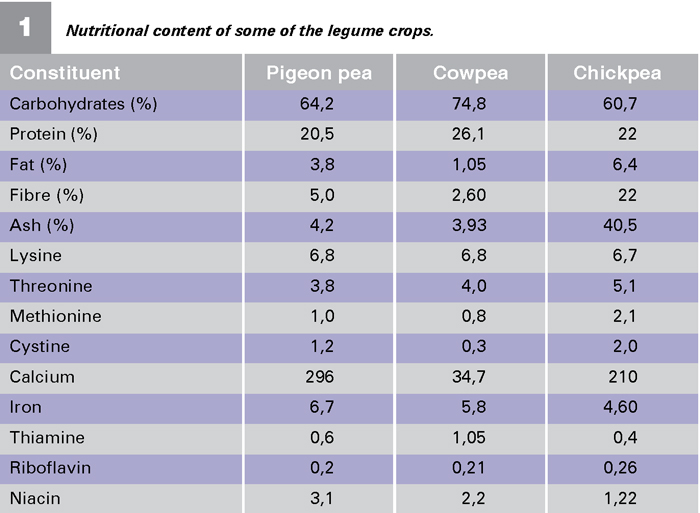 CONSUMPTION
It can be consumed as dry or green seeds and green pods. In South Africa, it is mainly prepared as a snack, soup, mixed with samp, dahl, or as porridge eaten with or without meat. In India and other African areas, it is largely used in diets to supplement cereals and tubers, which are protein deficient. Moreover, its high nutritional value has also made it a good source of fodder. It provides primary or supplementary high-quality forage at a time when other forages are less productive. There are reports of improved performance of poultry fed with pigeon pea.

The dry leaves, the left-over pods and milling products form feed for livestock. This is because pigeon pea plants produce a high biomass and provide edible forage or grazing vegetation in dry seasons. On the other hand, the crop has pharmaceutical benefits. The green leaves and pods are used for medicinal purposes. Extracts from the leaves are rich in antioxidants and widely used in traditional medicine to treat several diseases. Extracts from the roots are used as a relief for fever and as an anthelminthic. Fresh seeds are believed to help problems of urinary systems in males while immature seeds are recommended for treatment of kidney problems. 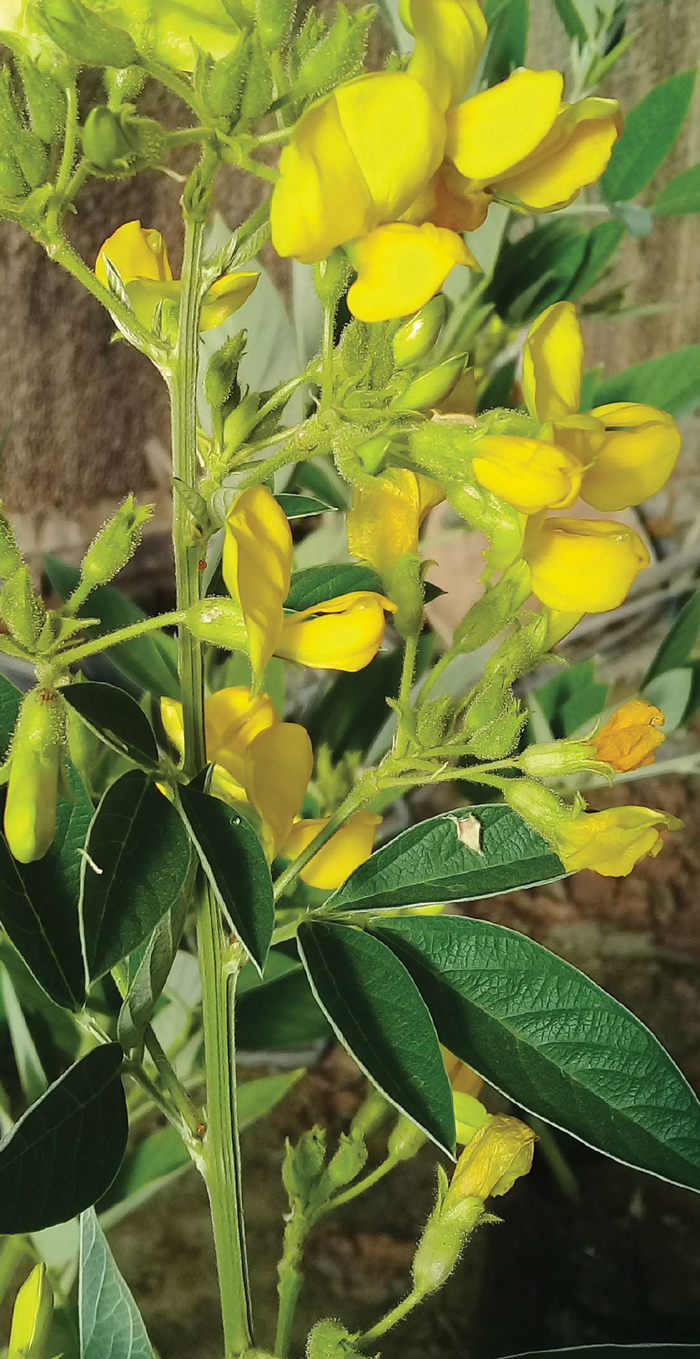 GENETIC DIVERSITY
Unlike other legumes, the crop has been largely neglected by science. Generally, in Africa, farmers currently grow unimproved and heterogeneous landraces in seed mixtures that hold distinctive and divergent genetic features. For example, the perennial pigeon pea types provide material for fuel wood, basket weaving, and roofing in African villages. Thus far, the full genetic diversity of the crop remains largely unexploited in Africa. Hence, only farm level selection has been practiced wherein existing landraces are not intensively evaluated and their seeds multiplied for production. There are limited studies done on pigeon pea in South Africa targeted at breeding of the crop and consequently improving varieties in the major growing areas of the country such as Limpopo, Mpumalanga and KwaZulu-Natal.

Strategic collection, characterisation and preservation of genetic resources are major components in plant breeding programmes, especially with new and under-utilised crops. This will help for targeted breeding involving various characteristics and for germplasm conservation. It will also contribute to alleviation of poverty, food and nutrition insecurity. This is because the world population growth was projected to increase to 10 billion by the year 2050.

HIGH DEMAND FOR PRODUCTION
Furthermore, there is high demand of pulse production worldwide including countries like India where pulses are a major staple food. Low yields reported in many regions calls for further improvement. For instance, yields of 0,5 tons to 0,1 tons were reported in sub-Saharan Africa landraces as compared to the Malawian varieties, which yielded within a range of 2,7 t/ha to 3 t/ha. Careful selection and classification of the pigeon pea germplasm is imperative for further use using qualitative and quantitative traits as well as nutritional value.