In the September issue of SA Graan/Grain the physiological changes that normallytakes place in the development of a wheatplant was discussed briefly. By knowing howa wheat plant grows and develops, and anunderstanding of why it responds as it does,can help in managing these plants.

Cultivars differ in their grain yield potential. During the past 30 years, the average yield of cultivars in South Africa has increased with approximately 0,1 ton per hectare per year, due to the release of new and improved cultivars (Figure 1).

Roughly half of this increase has been due to improved varieties with the remaining half due to improved management. With environmental conditions so unpredictable and variable, proper cultivar selection can make the difference between profit and loss in many years. It therefore deserves careful attention each year. Obviously, the primary objective is to choose cultivars that will give high yields and the highest possible net income, but this is not a simple matter.

Cultivar choice is an economic decision by which the producer aims to achieve the highest return with the lowest risk. High yield potential should not be the only criteria for cultivar selection since many factors influence actual grain yield.

Generally the top five or six recommended cultivars will all have very good yield potential. The key is to try and match the cultivars’ strengths and minimise weaknesses so that a cultivar has the opportunity to yield well. Cultivar strengths (e.g. yield potential, pest resistance, or quality) should be matched against expected field problems (e.g. diseases, RWA infestation, or lodging). Several different cultivars should be planted in order to spread production risks associated with unpredictable weather and pest problems.

Factors determining cultivar choice
The most important factors that should be considered when choosing a cultivar are briefly discussed below. Detailed discussions on each of these factors are available in the annual Production Guidelines of the ARCSmall Grain Institute. Wheat producers need to familiarise themselves with the good and bad characteristics, as well as the demands of a cultivar when selecting a cultivar. They should also remember that a cultivar will only reach its full potential if it is produced under optimal and correct production methods.

Diseases and insects
Genetic resistance to insects and diseases is an excellent control method when such resistance is available. In this way, risk and input costs (chemical spraying costs) can be reduced.

Aluminium tolerance
Many soils are becoming more acidic due to the use of nitrogen fertilisers. A wheat producer should be aware of the pH of the soil. Acidic soils with a pH(KCl) <4,5 and with an acid saturation higher than 8%, are unfavourable for wheat production in general.

Photoperiod
After vernalisation is completed, cultivars which are sensitive to photoperiod, require a certain day-length to flower. Sensitivity to photoperiod differs between cultivars. Most cultivated wheats, however, are quantitative long-day plants. They flower faster as the day-length increases, but they do not require a particular length of day to induce flowering.

Shatterproof
Certain cultivars are more susceptible to bird damage, and losses due to shattering before and during harvesting.

Seed quality
The source of seed for planting can have a vital impact on establishment and yield. Quality seed is essential for obtaining excellent germination and stand establishment. Good quality seed is true to variety, free of other crop seeds, weeds, foreign material, disease, and has plump, dense kernels of high germination. Using certified seed is an excellent way to ensure the quality of a seedlot.

Planting date
The planting date is only one of the many management practices that are determined by the growth and development patterns of wheat. Climatic conditions vary greatly across South Africa causing the recommended planting dates to vary for different areas.

Grading and quality
The major use of wheat is bread wheat for human consumption. Therefore, it is important that the grain is of a standard needed by the millers and bakers to produce a quality end product. Quality is determined by cultivar as well as by growing conditions. According to the grading system, only one bread wheat class exists with four grades, namely B1, B2, B3 and B4 that are determined according to the protein content of the grain, the hectolitre mass and the falling number.

Hectolitre mass (HLM)
Although this characteristic is genetically associated with a particular cultivar, it is affected by environmental conditions during the grain filling period. The conservation of green leaves, sufficient water and nutrients during grain fill, will ensure high hectolitre mass. In regions where extreme soil water and heat stresses occur during this critical period, when continuous rain events happen during harvest, and when diseases such as rust and head blight infect the crop, losses can be suffered due to the downgrading of the grain because of low hectolitre mass values.

Falling number
Falling number is an indirect measurement of the enzyme activity in the grain. High alphaamylase activity (low falling number) is an indication that the starch molecules have to a large extent been broken down to sugars and that such grain is unacceptable for commercial milling and baking purposes.

Pre-harvest sprouting tolerance
This refers to the tolerance of a cultivar against germination in the ear prior to harvesting. None of the commercial cultivars will sprout under normal conditions. Certain cultivars are, however, more prone to pre-harvest sprouting than others when continuous rainfall and high humidity conditions occur during or prior to the harvesting period.

A wheat plant is exposed to many hazards during its lifetime, namely low temperatures, high temperatures, drought, hail, and wind. Damage from these occurs in adverse environments. Losses can be decreased by developing more adaptable varieties and using proper management, but can never be eliminated entirely. The effect of these stresses on wheat growth, development and yield will be briefly discussed.

Water stress
Water stress occurs whenever water absorption by the crop is lower than the evaporative demand of the atmosphere. It can occur in any of the growth phases (described in Part 1) and has a negative effect on the yield of a crop. The tillering stage is especially sensitive to water stress.

Research has shown that only 50% of the tillers that would normally have been formed are developed if conditions are dry enough. As a result, leaf area index development is the most affected physiological process during this stage.

Transpiration takes place when water evaporates out of the open stomata of a plant (Figure 2). Plants have to keep their stomata open to allow CO2 to enter the leaf and to be available for photosynthesis. However, having the stomata open simultaneously provides a pathway for water vapour diffusion out of the leaf to the atmosphere. This pulls more water and nutrients up to the top of the plant, but causes the plant to lose water and potentially dehydrate.

Crop transpiration, is positively and linearly related to grain yield in wheat. Figure 3 shows the relationship between yield and evapotranspiration for wheat obtained from a 178 crop-year database of irrigated and dryland wheat data from Texas in the United States. This figure clearly shows that grain yield increases with transpiration. The water use efficiency of a plant is how good the plant is at bringing in CO2 for photosynthesis without losing much water out of its stomata. Those cultivars that can keep their stomata open during water stress periods have the ability to produce higher yields under stress. 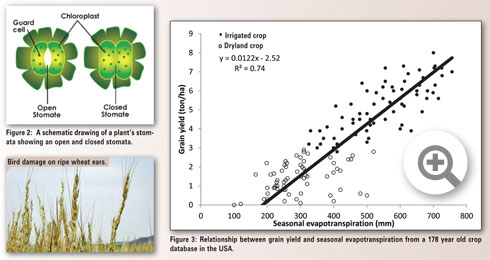 Heat stress
High temperatures severely limit wheat yield. It accelerates plant development and specifically affects the floral organs and the functioning of the photosynthetic apparatus. Transpiration is a mechanism of heat avoidance. A crop that maintains transpirational cooling may be a good heat avoider. The temperature of plant organs in the field may differ from air temperature by several degrees. This difference increases with a greater rate of transpiration. If water shortages arise and stomata begin to close, leaf temperature rise and may exceed air temperature.

Cold damage
In South Africa, frost damage mainly occurs during spring (August, September and October) when the daily temperatures are ideal for active growth, but may fall to damaging levels at night. Injury due to low temperatures can occur during different stages of plant development. In the cold winter months, relatively little damage occur, because the ear has not yet appeared and is not exposed to direct frost. As soon as temperatures begin to rise, especially in drought periods, the plants become more susceptible to frost damage.

Damage can occur in the following ways: 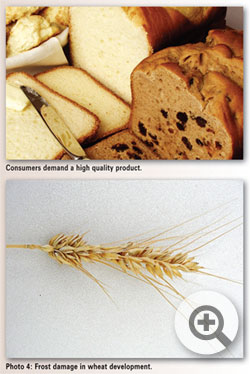 Plants have evolved a variety of adaptive mechanisms that allow them to optimise growth and developments, while coping with environmental stresses. Plant breeders have selected and recombined the variability that exists in natural populations to produce cultivars with increased production potential and adaptation to a wide range of environments.

An understanding of how plants respond to the environmental stresses at different growth stages can assist in the management of the crops throughout the growing season.