Physiological changes in the wheat crop

Growing a good wheat crop requires several good production decisions and some measure of luck from Mother Nature. Wheat is a widely adapted crop, but it responds best to inputs at certain stages of plant development. It is therefore important to understand plant growth and development in order to manage your wheat crop efficiently. 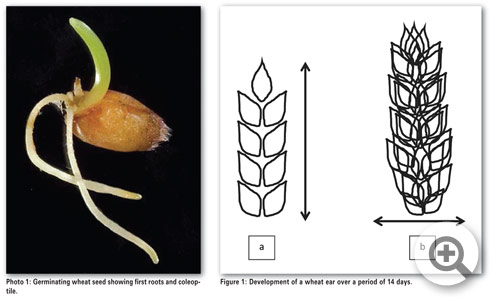 A wheat plant progresses through several growth stages. We all know how important it is to get the crop off to a good early start, but we sometimes forget how vital the other growth development stages are for determining the yield and quality of the crop. By knowing how a wheat plant grows and develops, and an understanding of why it
responds as it does, can help in managing these plants.

Nitrogen fertiliser, pesticides, and irrigation must be applied to wheat at certain times to have the best effect. Proper timing for most of these operations is determined by the growth stage and not by the calendar date. Because growth at any given date can vary from one year to the next, it is important to be able to recognise the different growth stages of wheat.

The time span of each development phase essentially depends on the cultivar, temperature, daylength and planting date. Various environmental stresses, particularly heat, but also water, may shorten the wheat growth phases. There are several scales for wheat that describe visible growth stages without the need for dissection of the plant. In South Africa, the scale of Joubert provides a good description for both vegetative and reproductive stages. This scale is described in detail in the Annual Production Guidelines of the ARC-Small Grain Institute.

Germination and seedling emergence
Quality seed is essential for establishing a productive stand. Large, dense kernels are considered to be of better quality than low, test weight kernels. They tend to produce strong seedlings with lush leafs and can produce even stronger tillers. This is the first step in the establishment of a good yield potential.

If, however, a seed is planted too deep, beyond the elongation distance of the coleoptile, seedlings cannot emerge and a poor stand will occur (Photo 2). Semi-dwarf wheat varieties form short coleoptiles as well as short plants, and planting depth is particularly critical for them.

The number of tillers is determined by the seeding rate, soil moisture and fertility, temperature, and cultivar. The first tiller develops approximately four weeks after the seedling emerges from the soil. Thereafter one or more tillers develop each week. Tillering can be encouraged by planting early, fertilising with nitrogen and, where possible, irrigating if soil moisture is low. Late planting is particularly disadvantageous because it reduces tillering and must be compensated for by higher seeding rates.

Tillering is an important developmental stage that allows plants to compensate for low plant populations or take advantage of good growing conditions. However, management inputs will not compensate for skimpy or erratic stands caused by insects, seedling diseases, poor seed quality and herbicide injury.

To form tillers, the plant needs energy and a shortage of water and nutrients will lead to less tillering which will negatively affect the yield. Tillering is very sensitive to water stress, being almost halved if conditions are dry enough. Nitrogen sufficiency during tillering is equally important because potential ear number, which is generally the most important yield component, is determined by tillering success.

The change from the vegetative to the reproductive phase is usually as a result of stimuli such as daylength, vernalisation, heat or drought stress, or a combination of these factors and it occurs approximately seven weeks post emergence (Joubert GS 7). As the plant changes from vegetative to reproductive, nutrients, including N and soluble carbohydrates, are translocated from older plant tissues (stems, leaves, awns) to the developing kernels where they are used to support cell division and expansion, and the synthesis of storage proteins and starch. As older leaf tissues are depleted of their nutrient and carbohydrate reserves, they die off.

The duration of the vegetative stage in wheat may vary from 25 to 50 days depending on planting date and cultivar. It depends on the rate of leaf appearance and when floral differentiation occurs which are induced by photoperiod and vernalisation. In Table 1 approximate days to the respective developmental stages are given for dryland wheat planted at the beginning of May, the beginning of June and late June.

The stage between flag leaf and anthesis is of special importance, since yield potential and the protein content of the grain are to a large extent determined during this phase. The flag leaf is the last leaf to emerge and makes up approximately 75% of the effective leaf area that contributes to grain fill. For this reason, protecting the flag leaf is critical to achieve the desired yield goals. Already at this stage, the ear is physiologically mature and it grows until anthesis only in volume. This is the stage where the highest potential yield occurs, measured by the number of potential fertile florets per spikelet. However, as a result of mainly water and nutritional stresses, many of these florets are aborted.

During this phase, the plant should be supplied with sufficient water and nutrients to enhance maximum energy production, mainly in the form of sugar and starch. If these substances are available in abundance, it will prevent abortion of florets and the remainder will be stored in the leaves and stems for use during grain fill. This stored energy is of special importance to produce kernels with high starch and protein content.

It is important that chlorophyll is retained after appearance of the flag leaf, since this is responsible for the photosynthetic processes which provide the energy that will eventually reach the kernel. Water deficit during this phase, can have a negative effect on the yield of the grain. 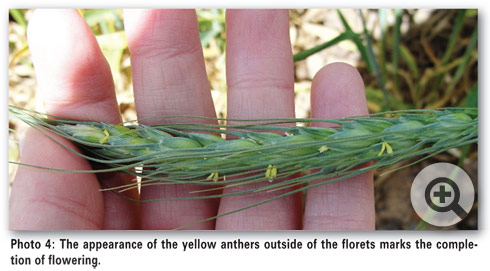 The ear develops as follows over a period of approximately two weeks:

The length of the ear is determined first (Figure 1a). The length gives an indication of the number of spikelets. This occurs between approximately GS7 to 9. Cultivars have the ability to produce more than 25 spikelets per ear, but under field conditions, more than 20 spikelets per ear are regarded as excellent.

The width of the ear is developed next, in other words, the potential number of florets per spikelet and later kernels per ear (Figure 1b). This occurs between GS10 to 14. Each spikelet may have up to five to six
well-developed potential ferile florets. The best developed florets are located somewhat below the middle of the spike. At the base of the spike, there are usually one to two underdeveloped spikelets. The first and second florets in a spikelet are the best developed. The upper florets in a spikelet are underdeveloped and usually do not bear grains.

Flowering and pollination of wheat normally begins in the centre of the ear and progresses to the top and bottom of the ear during a three to five day period.

The actual number of kernels that will form in the spike is determined in the period between 20 and 30 days before anthesis and ten days after anthesis. More than 40 kernels per ear are considered as excellent. Normally it is between 30 and 35 kernels per ear. Kernels per ear are determined by the number of flowers that are pollinated. Pollen formation and pollination are very sensitive to environmental conditions.

Especially high temperatures and drought stress during heading and flowering can reduce pollen viability and thus reduce kernel numbers. Similarly, frost during flowering also has a detrimental effect on wheat.

Temperatures only slightly below freezing can quickly kill the male flower parts, sterilising the florets so that no grain is formed. However, because of the variation in flowering, only part of the spike might be sterilised, therefore grain might form on the centre or ends, but not on the other parts.

The grain filling period is critical for producing high yields, because kernel size and weight are determined during this stage. The longer this filling period lasts, the greater the probability is for higher yields. If this period is shortened, yields will usually be lower.

Most of the leaves die soon after flowering, but the flag leaf, glumes, and awns remain active during most of the grain filling period. Photosynthesis in the awns, or beard, provides 10% - 20% of the grain weight.

Approximately 70% - 90% of the final grain yield is derived from photosynthates (products of photosynthesis) produced by the plant during grain filling. The flag leaf and ear usually contribute most, but certainly not all, of the photosynthate to the grain. Photosynthates produced by the flag leaf may contribute up to 50% of the grain yield, depending on seasonal conditions, but the ear and other leaves can also contribute significant quantities. Maintaining green and functional upper leaf blades, sheaths and ears during grain filling, is important for high yields.

During grain filling, the sugar stored in the stems and leaves move rapidly to the basal grain on the wheat ears. This form of sugar will always be abundant for grain filling, even though temperatures are high and moisture in the plant low.

However, if high temperatures continue, the vascular tissues that carry sugar to the middle and the upper part of the ear will break down. The net result is that the kernels in the top of the ear are not filled properly, resulting in a low kernel weight. If stresses occur during the later stages of grain filling, it results in kernels with high protein and low HLM.

The development stages of the kernel are determined by the hardness or consistency of the endosperm of the new kernel. Fives stages could be recognised (Photo 5):

Kernel length and width are established during this stage. The kernel rapidly increases in size, but does not accumulate much dry matter. A clear fluid can be squeezed from the developing kernel.

During this stage there is a noticeable increase in solids of the liquid endosperm as nutrients in the plant are redistributed to the developing kernels. During the milk stage, a white, milk-like fluid can be squeezed from the kernel when crushed between your fingers. As the kernel fills, the endosperm thickens into a soft dough stage.

The kernels are soft, but dry. The water concentration of the kernel has decreased so that the material  squeezed out of the kernel is no longer a liquid, but has the consistency of dough. The kernel rapidly accumulates starch and nutrients and by the end of this stage the green colour begins to fade.

The kernel has become firm and hard and is difficult to crush between your fingers. Kernel moisture content decreases from a level of 40% to 30% and it reaches its maximum dry weight. The wheat is then considered physiologically mature (no more weight is added to the grain).

Kernel moisture content is still high when the wheat begins to ripen, but decreases rapidly with good weather. The plant turns to a straw colour and the kernel becomes very hard. Harvest can begin when the grain has reached a suitable moisture level.

Protein and starch are the most important constituents of the wheat kernel. Most of the protein comes from nitrogen previously accumulated in the leaves, and most of the starch is from sugars made by photosynthesis during the grain filling period. The nitrogen moves into the filling kernels to form protein during early grain development.

This is why, if yields are low because the kernels did not fill properly, the grain is high in protein. Drought and high temperatures are usually responsible for this condition.

Much is known about the physiology of wheat that can be of direct use to agronomists and breeders. For maximum wheat yield, proper management and favourable weather conditions are necessary during the key growth stages.