For millions of people in the semi-arid tropics of Africa and Asia, sorghum is the principal source of energy, protein, vitamins and minerals. Sorghum is important in those areas that receive less than 650 mm of annual rainfall. Improvements in productivity and quality of the grain will significantly contribute to household food security and nutrition of the inhabitants of these areas. Sorghum varieties and hybrids differ in palatability and nutritional value.

Physical grain characteristics, variation in composition due to production in diverse environments, and inherent genetic characteristics are a few of the major aspects known to affect variation in food and feed quality of sorghum grain. The thousand grain weight has a very wide range of values, from 3 grams to 80 grams, but in the majority of varieties it is between 25 grams and 30 grams.

Large grains with corneous endosperm are usually preferred for human consumption. The most common grain colours are white, brown and red. Yellow endosperm with carotene and xanthophyll increases the nutritive value. Sorghum grain that has a testa contains tannin in varying proportions depending on the variety. Chemical composition and physical characteristics of grain samples of 25 sorghum genotypes from a germplasm collection at the ARC-Grain Crops Institute (ARC-GCI) are presented in Table 1. 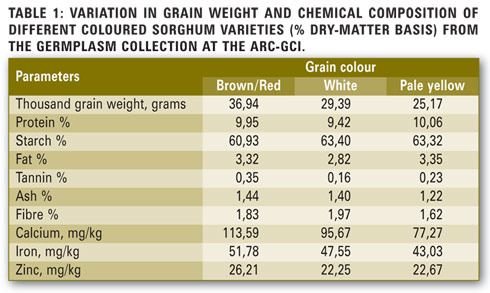 Genetic factors play a major part in determining grain composition. Environmental factors, including agronomic practices also affect grain composition. The protein content of the grain is significantly and inversely correlated with its weight and starch content. Starch is the major storage form of carbohydrate in sorghum. It consists of amylose, a straight-chain polymer and amylopectin, a branched-chain polymer of glucose.

The chemical nature of the starch, particularly the amylose and amylopectin content, is yet another factor that affects its digestibility. Starch digestibility was reported to be higher in low-amylose, i.e. waxy, sorghum than in
normal sorghum.

Tannins, most commonly found in red wine and tea, are found in sorghum grains, particularly in red grained types. These tannins contain compounds called antioxidants. Antioxidants protect against cell damage, a major cause of diseases and aging. Sorg hums with high levels of antioxidants are important sources of health foods. Non-tannin sorghums may be healthier as well.

Sorghum starch is gluten-free. This makes sorghum a good substitute for wheat flour for individuals who are unable to digest food made from wheat.

The protein and starch in grain sorghum are more slowly digested than those of other cereals, and slower rates of digestibility are particularly beneficial for diabetics.