The agricultural sector in South Africa is faced with a vast number of different scenarios - on the one hand there are excellent large-scale, commercial farmers who compare with the best in the world, and on the other hand there are subsistence farmers who are struggling to feed their families.

The former homeland areas cover 13% of South Africa which is in the region of 18 million ha (only a portion of this is arable land however), and in the Grain SA Grain Farmer Development Programme, we have more than 3 500 subsistence farmer members (those currently farming on less than 3 ha of land). In order to achieve household food security with regard to staple food, each of these households needs 1 ton of maize per year. Currently these farmers are producing less than 1 ton per ha, despite many of them being in the high potential areas of the Eastern Cape, Mpumalanga and KwaZulu-Natal.

The reason for these poor yields relates directly to production practices - open pollinated seed, soil acid saturation, inadequate use of fertiliser and poor weed control. This can all be changed however.

Over the past number of years, Grain SA has been fortunate to have a Grain Farmer Development Programme which is funded by the Maize Trust, Winter Cereal Trust, Oil and Protein Seeds Development Trust, Sorghum Trust, the ARC and the AgriSETA.

The mission of this programme is: “To develop capacitated black commercial farmers and to contribute to household and national food security through the optimal use of the natural resources available to each farmer”.

The farmers who are members of the programme receive training and skills development through study group meetings, demonstration trials that are planted near their lands, farmers days where they receive information from industry, a Farmer of the Year competition to encourage them, individual on farm support for the larger farmers, training courses on all aspects of grain, oil seeds and cereal production, and a monthly newsletter which gives time specific, relevant information.

There are thousands of small farmers who have been exposed to the correct practices, but unfortunately many of them are not able to access the correct production inputs, and are not supported in their fields during the critical months of summer crop production.

The concept of “commercial farming” is difficult to contextualise in the deep rural areas. The realities of the communal land tenure system do not always allow for “economies of scale”. In our Grain Farmer Development Programme we have started to use the term “economies of efficiency” - you may therefore not have land of a commercial size, but you can attain a commercial yield on the land that is available.

A project is born

During 2014, the ARC indicated that they would be willing to sponsor the costs of mentorship for a number of farmers so that they adopt modern methods of production, and at the same time Monsanto made an offer to assist farmers to access very good Roundup Ready hybrid maize seed (treated) with the Roundup for 1 ha. This was the start of the project.

The success of any development programme is directly linked to the involvement and ownership of the project by the beneficiaries (farmers). Each farmer who wanted to be part of the project had to contribute R1 500 per ha which they paid into a special bank account created for this purpose (a Standard Bank Third Party Fund Administration Account managed by Grain SA). Time was running out and by 10 October 2014, 855 farmers had deposited their money.

The criteria for participation in the project were:

Figure 1 indicates the location of the farmers - 1/3 in Mpumalanga, 1/3 in KwaZulu-Natal and 1/3 in the Eastern Cape. 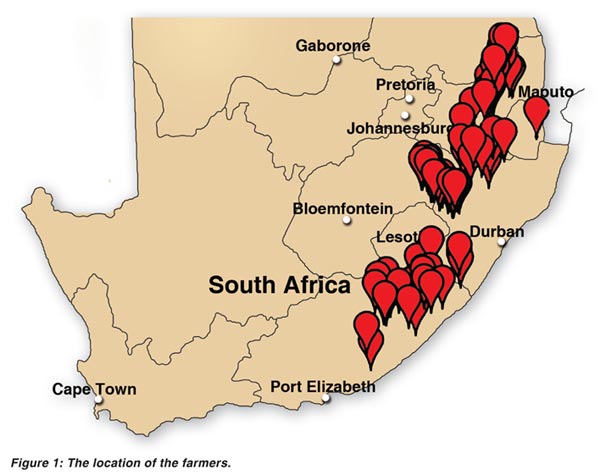 In order to make the project a success, additional partners had to be sought. The response was very positive. As mentioned, the ARC and Monsanto were already fully committed and the following partners also came on board: 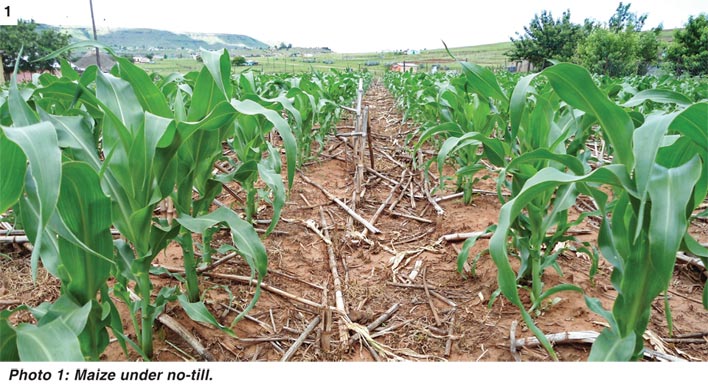 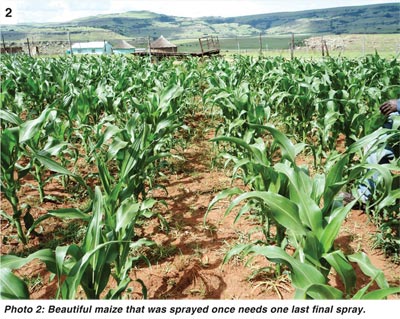 It is important to be able to trace the progress of any project and fortunately Grain SA has a comprehensive data base of all the members of the development programme. Each participating farmer’s information is captured on the system with the GPS points of the land (so that donors can visit the actual sites and meet the farmers).

After depositing their contribution, the farmers had to indicate whether they wanted yellow or white maize seed. The fertiliser order for each farmer was processed (grouping the farmers into clusters for ease of delivery). A few additional handheld planters and knapsack sprayers were bought to ensure that there was enough equipment to plant the crop at the correct time. 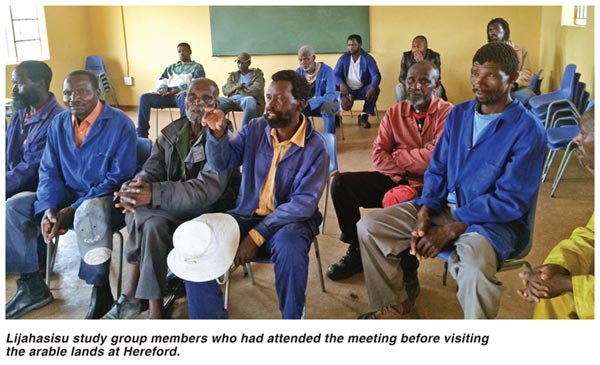 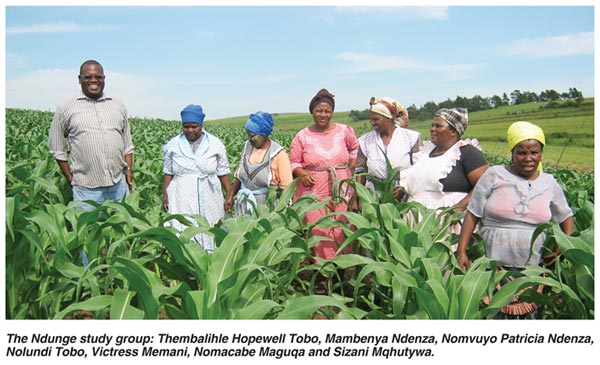 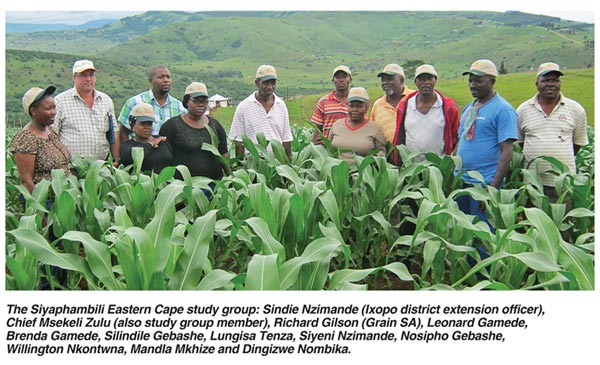 All the farmers in the project have been able to plant their maize crop and the results are overwhelming - a high population of good maize plants that have been properly fertilised and received effective chemical weed control.

The farmers in the project are delighted with the results and want to continue next year. A large number of other farmers who were not involved in the initial project have also requested to be included for next year. 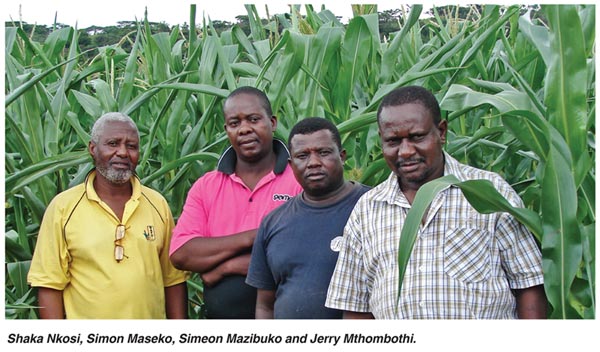 The Jobs Fund (a project of the National Treasury) is paying attention to the agricultural sector. Their focus is on job creation, income generation and poverty alleviation.

As Grain SA we have submitted an application to the Jobs Fund for the expansion of this project. The following is proposed:

The aspect of “life after the project” is an important one if this project could be replicated in other areas. Past experience has shown that the farmers must be assisted for a limited period of time, and their contribution should increase each year until they are funding the planting themselves - if this is not the case, the farmers tend to participate while they get grants and when the grants stop, the whole effort stops. We do not want this to happen.

Initially the farmers will only contribute 25% of the production costs, and industry will contribute 30% (in the form of discount) - the balance for the inputs will be carried by the Jobs Fund. However, the support will only continue (on the decreasing) basis for four years - in year five, the farmer will carry all the costs.

The improved yields take some time to be realised, although in year one there is already a dramatic improvement. In some areas there is a very bad infestation of all types of weeds and particularly yellow nut sedge, which is more difficult to control.

As the farmers become more comfortable with the principles of minimum till and chemical weed control (timing of operation), the yields improve to reach commercial levels for each area.

Aspects still to be finalised

As the project is in its first year, we have not been able to explore the marketing challenges (if there are any). In most areas of South Africa there is an existing market for grain (nationally and locally in most areas). It is envisaged that farmers will sell to the local markets until the supply exceeds the demand and at that stage, we will involve the larger grain traders and agribusinesses to become involved in the project.

There are a large number of tractors in these areas and as the production increases, it is envisaged that tractor drawn harvesters will be required to assist with the process so that the grain can be collected centrally and marketed more efficiently. It is our belief however that what is slowing down the agricultural development in these rural areas, is the lack of good commercial level production and not the access to the markets - once the supply is there, then the infrastructure (silo dams and bags) will follow as it will have a cost benefit effect for industry.

As the production increases, the following opportunities will present themselves:

Article submitted by Jane McPherson, Programme Manager of the Grain SA Farmer Development Programme, for SA Graan/Grain May 2015. For more information, send an email to jane@grainsa.co.za.