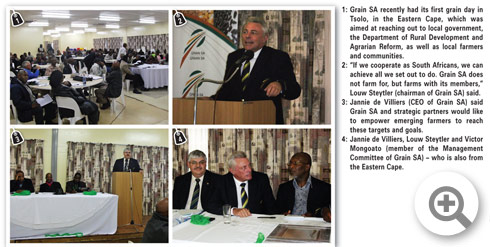 Grain SA recently had its first grain day in Tsolo, in the Eastern Cape.

This day’s purpose was to bring all relevant stakeholders together to share and unite in implementing the same vision with a single common result.

The event was aimed at reaching out to Local Government (LED), the Department of Rural Development and Agrarian Reform, local farmers and communities, with the focus being on:

According to Mr Jannie de Villiers, the CEO of Grain SA, the increased mining in Mpumalanga will cause this province to lose 1 million tons of maize in the future. The Eastern Cape will have to produce maize to make up for this shortfall, which has an average of 300 000 hectares of underutilised arable land.

This is where Grain SA and strategic partners would like to empower emerging farmers, to reach these targets and goals. Grain SA and government are working together in other provinces to achieve these very same goals.

There is currently an average of 2 000 study group members in the Eastern Cape, which is the beginning of the transformation from subsistence to commercial maize production. Future generations will be grateful for the foresight of the Eastern Cape to produce the maize that was lost in the Northern provinces.

Mr Joe Mnyengo of AFFASA, raised the question whether the government is doing enough to alleviate the challenges that the Eastern Cape are experiencing such as technical skills, machinery, storage facilities and the absence of youth in the production areas. He summed this up by saying: “Don’t plan for us, but plan with us.” The need for government and the private sector to partnership to achieve food security and sustainability, is immense.

According to the statistics presented by Mr Sonani from RDAR, Eastern Cape, the Eastern Cape has 6,8 million people of which 74% live below the poverty line.

Mr Henk Agenbach from the Agri Business Chamber in the Eastern Cape says that we must stop working in different spheres. We must take ownership of our destiny and plan together to make a success.

In his address, Mr Louw Steytler, the chairman of Grain SA, indicated that he would like to see Grain SA empower the people to empower themselves. “We need to spread a message of collective hope to all South Africans. If we cooperate as South Africans, we can achieve all we set out to do. Grain SA does not farm for, but farms with its members.”

Throughout the day, the most common remarks were that all roleplayers need to be brought together to achieve the one common vision, which is to plant grain and to alleviate the food scarcity in South Africa.

United in South Africa we stand.