Information, updates and releases pertaining to the Fall Armyworm infestation in South Africa will be published below as and when it becomes available.

Fall Armyworm (FAW) on  has been detected on young sunflower in Komatipoort, Mpumalanga. Producers are urged to scout their fields and report any occurrence or suspected occurrence of the pest to DAFF on 012 319 6384 or e-mail JanHendrikV@daff.gov.za

INTEGRATED MANAGEMENT OF THE FALL ARMYWORM ON MAIZE

The Integrated management of the Fall Armyworm on maize is another wonderful document developed by the FAO to assit farmers with the management of FAW. The present guide has been developed based on outputs from an intensive curriculum development writeshop organized from 21–25 July 2017 in Accra, Ghana by the Food and Agriculture Organization of the United Nations (FAO). The writeshop brought together researchers and Farmer Field School practitioners from West, Central, Eastern and Southern sub-regions of Africa, and entomologists and other researchers from the Americas with sound experience on FAW management.

South African producers are advised to adhere to the rules and regulations in place for the control of fall armyworm (Spodoptera frugiperda) as this will aid the Department of Agriculture, Forestry and Fisheries (DAFF) to limit the pest’s spread and damage. These regulations were published on 26 May 2017 in the Government Gazette and available on our website. It is of utmost importance that producers notify authorities of any occurrence or suspected occurrence of fall armyworm in their fields. Authorities should also be given uninterrupted access to the production area to carry out their mandated tasks and with producer’s assistance, where needed. Failure to uphold these regulations will be breaking the law which may lead to prosecution or a fine imposed by the authorities.

Following the last Fall Armyworm Steering Committee (FAWSC) of 1 February, with representatives from national and provincial government and industry, the following detections were sent to the national laboratory for confirmation:

Mpumalanga:
Present in the Witbank area and has been previously reported in other parts of the Nkangala district.

Limpopo:
Confirmed in the districts of Mopani, Vhembe and Waterberg.

KwaZulu-Natal:
High infestations in Greytown and other parts of KZN)

National surveillance programme traps have been placed and serviced in Gauteng and placed but still require servicing, in Mpumalanga. Traps are currently being set up in the Eastern Cape, with plans in place to set up traps in the Northern Cape as well as KwaZulu-Natal.

Furthermore, a trial has been planned to study the efficacy of the different lures as national surveillance traps generally catch a lot of false armyworm moths. In addition, a field protein kit for positive identification of fall armyworm is nearly ready. FAW infestation in certain parts of the country isn’t high (due to dry weather) but there’s a wide distribution. Potential for the pest to quickly grow and spread is high if the weather conditions improve. The recent La Nina condition (wet and cool) might change the situation, becoming favourable for the pest. Additionally, pest fact sheets have been translated into XiTsonga, SePedi, IsiZulu, SiSwati, and IsiNdebele and are available on the DAFF website.

To report occurrence or suspected occurrence of the pest contact 012 319 6384 or e-mail JanHendrikV@daff.gov.za.

Download a copy of the USAID FAW Guide - Fall Armyworm in Africa: A GUIDE FOR INTEGRATED PEST MANAGEMENT here

Incorrect identification of the fall armyworm, as well as incorrect reporting of feeding on uncommon hosts, are usually due to the lack of good visual reference material. This presentation aims to address this shortcoming.

The introduction of Fall Armyworm (FAW), a highly invasive pest into South Africa, has led to the establishment of a permanent FAW steering committee. The national status of the pest, surveillance, diagnostic capacity, damage assessment, pest management and control regulations are the points of deliberation for this committee.

Grain SA, SANSOR and the Department of Agriculture Forestry and Fisheries (DAFF) contracted CROP WATCH AFRICA to setup an area wide surveillance grid in the Western Cape to monitor for the presence of the Fall Armyworm (FAW), a newly introduced invasive pest in South Africa.

The initial surveillance program has kicked off in Limpopo, Mpumalanga and Kwa-Zulu Natal. Important to note that there were positive catches of FAW in the Thabazimbi, Groblersdal, Middelburg, Belfast and Komatipoort areas.

The introduction of Fall Armyworm, a highly invasive pest into South Africa, has led to the establishment of a permanent FAW steering committee. The national status of the pest, surveillance, diagnostic capacity,  damage assessment, pest management and control regulations are the points of deliberation for this committee.

Grain SA, SANSOR and the Department of Agriculture Forestry and Fisheries (DAFF) contracted CROP WATCH AFRICA to setup an area wide surveillance grid in the Western Cape to monitor for the presence of the Fall Armyworm (FAW), a newly introduced invasive pest in South Africa. During the three-month period of surveillance, no Fall Armyworms were detected in the traps in all localities surveyed.

With the end of the production season in the Western Cape, continuous surveillance of Fall Armyworm will remain a high priority. Over the next couple of months, the approach will change from area wide surveillance to early warning. Adopting this approach will ensure that if Fall Armyworm does enter the Western Cape, it will be detected and farmers can be made aware of the risks for the next season.

SCIENTISTS DECODE THE GENOME OF FALL ARMYWORM, MOTH PEST THAT IS INVADING AFRICA

As part of an international consortium, INRA researchers, in partnership with the CEA and INRIA1, have sequenced one of the first genomes of a moth from the superfamily Noctuoidea: Spodoptera frugiperda, or armyworm. This crop pest – until now only known on the American continent – has become invasive in Africa since 2016. Published in Scientific Reports on 25 September 2017, this study opens up perspectives for new methods of biological control and a better understanding of the mechanisms involved in the appearance of pesticide resistance.

The current Fall Armyworm outbreak has resulted in confirmed cases in all South African provinces except the Eastern Cape and the Western Cape. A recent confirmed case in the Eastern Cape was reported at the weekly Fall Armyworm Steering Committee meeting of 10 May 2017. Samples were collected and sent for positive identification which confirmed the species was now in the province. The pest has been reported in areas such as Port Shepstone, Port Edward, Port St Johns as well as some areas in KwaZulu-Natal province that lie on the border of the two provinces. Farmers in these and surroundings areas are advised to be especially vigilant and to scout their fields diligently even in the winter months as they may be ideal for the overwintering of the exotic pest.

Countries with confirmed presence of the pest 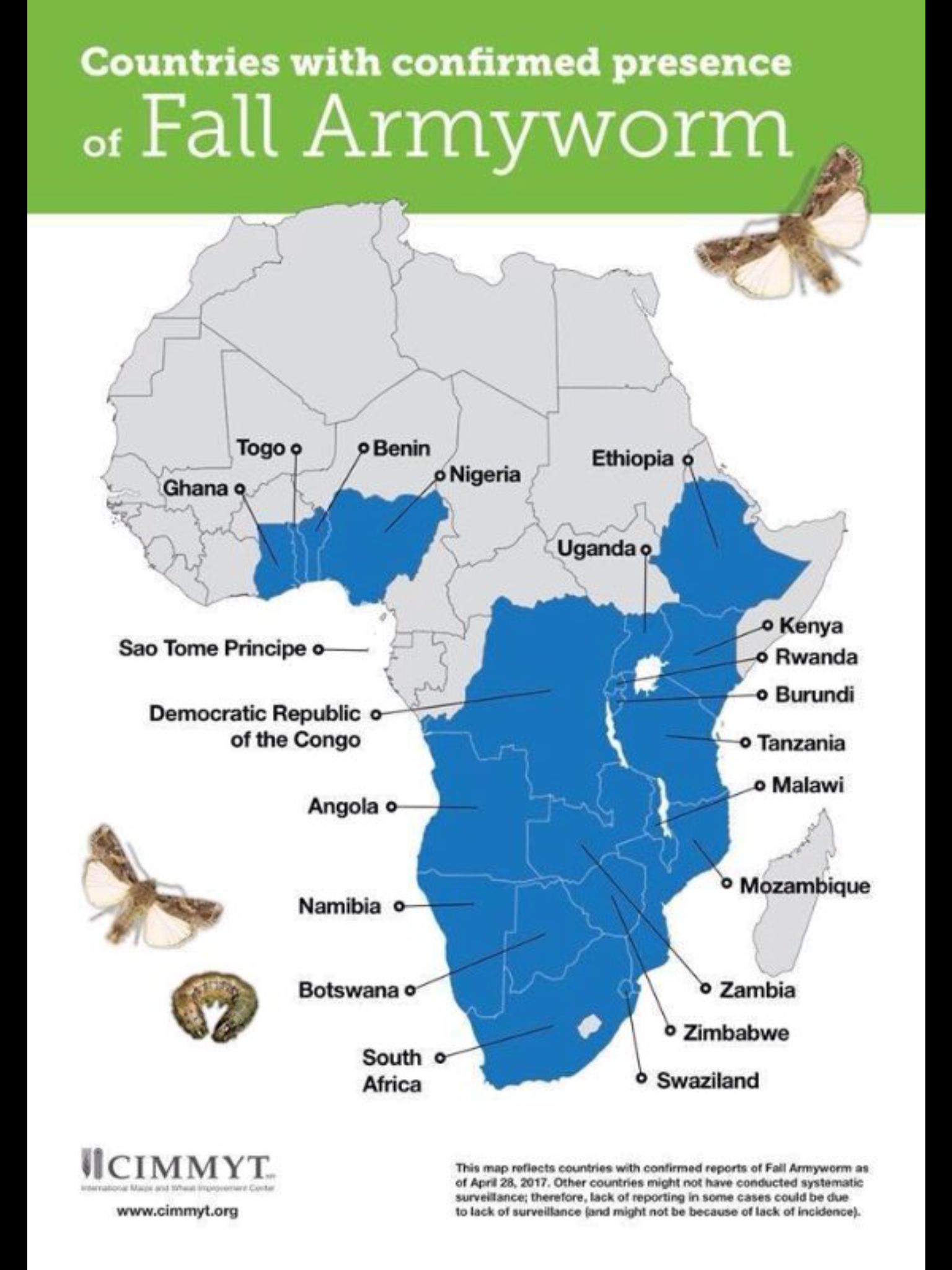 The latest summary of active ingredients registered and the IRAC list for cross checking can be downloaded below.

Active Ingredients and Mode of Action

UPDATED DETECTION OF FAW IN SA 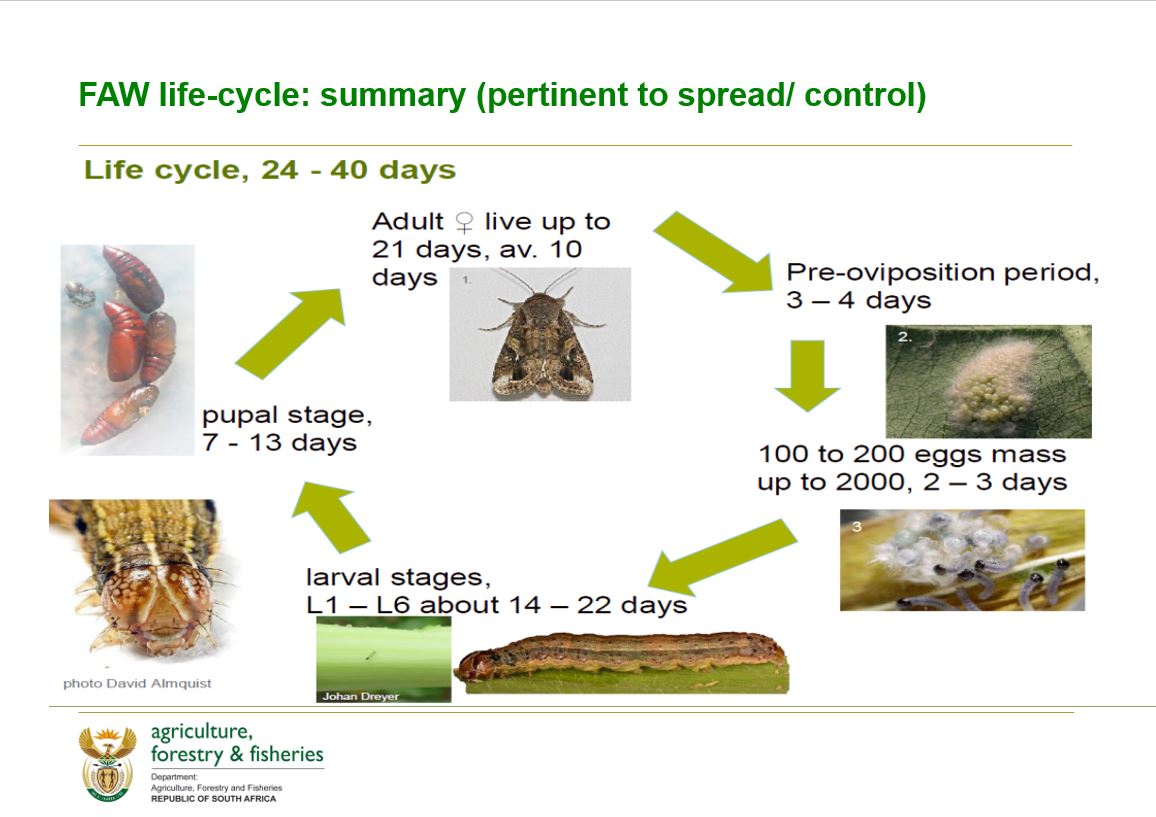 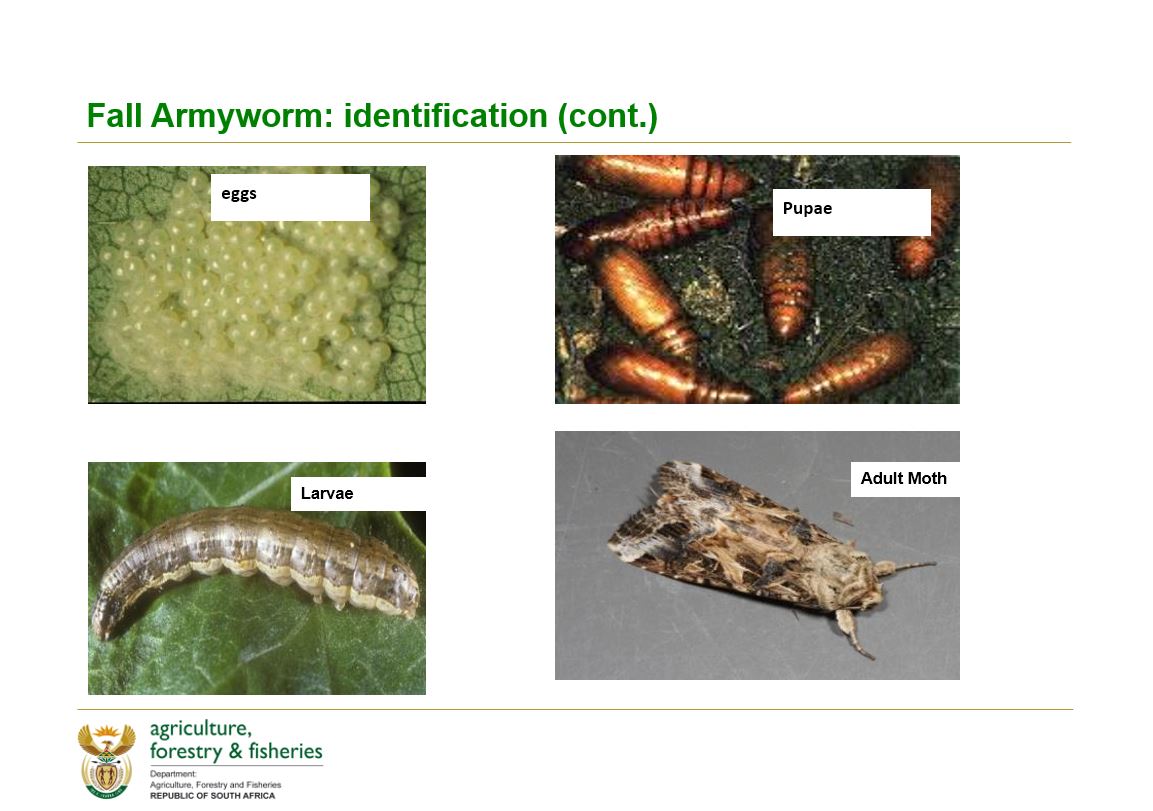 Grain SA arranged a special meeting between pertinent role-players to discuss different research initiatives against the FAW. The meeting was attended by DAFF, SANSOR, ARC-GCI and the North-West University. The main objective is to support producers in finding solutions to control and manage this pest. As a result, discussions focussed on research that would primarily assist producers in the short-term while medium- to long-term options were also debated. The latest updated list of registered products for the Fall Army worm can be downloaded here. The list has been updated to include Mode of Action; IRAC Group for Resistance Management and Crop which products are registered for.

The IRAC Mode of Action (MoA) classification provides growers, advisors, extension staff, consultants and crop protection professionals with a guide to the selection of acaricides or insecticides for use in an effective and sustainable acaricide or insecticide resistance management (IRM) strategy. In addition to presenting the MoA classification, this document outlines the background to, and purposes of, the classification list, and provides guidance on how it is used for IRM purposes.

The latest updated list of registered products for the Fall Army worm is as follows:

The latest updated list of registered products for the Fall Army worm is as follows: 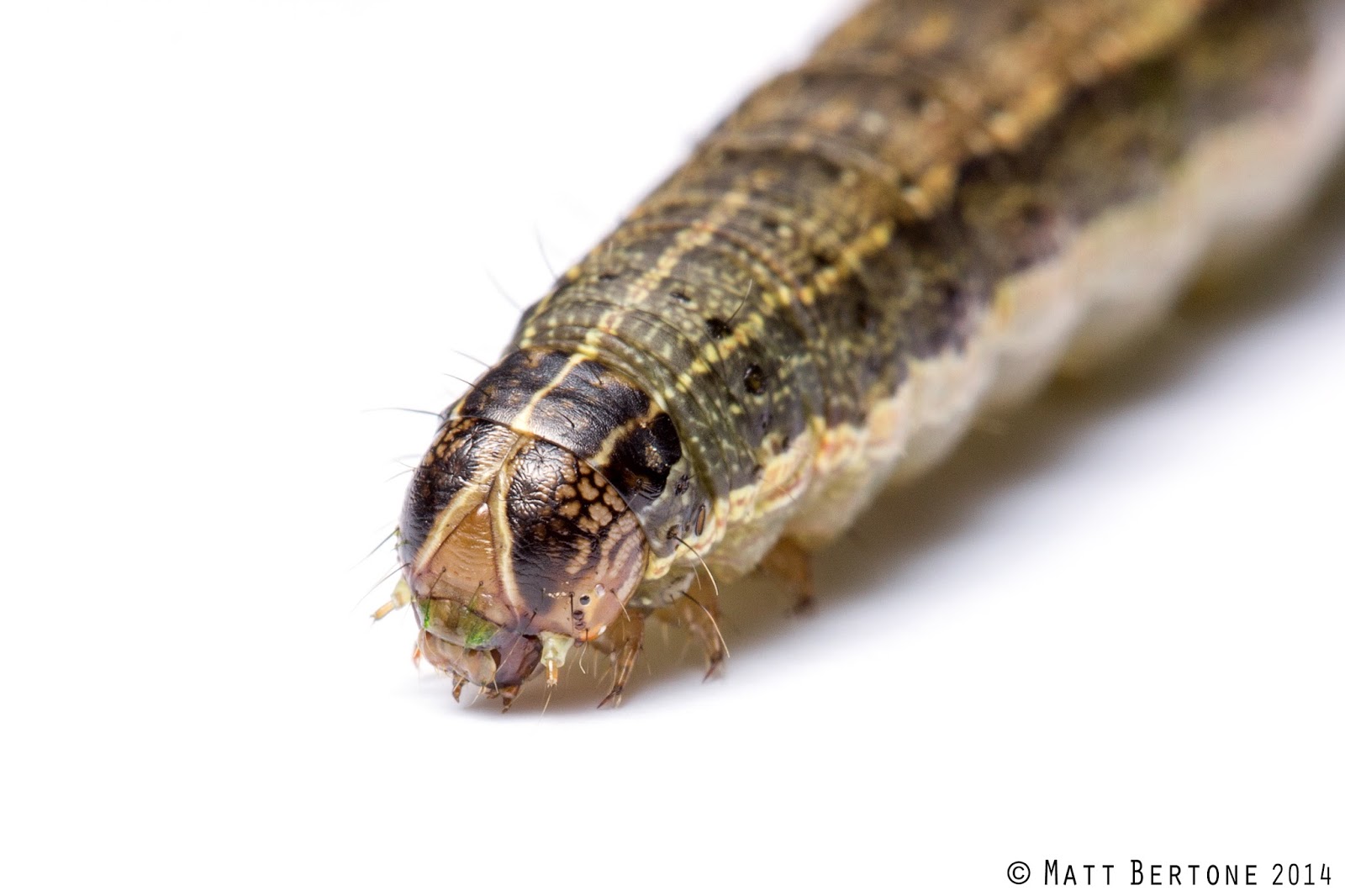 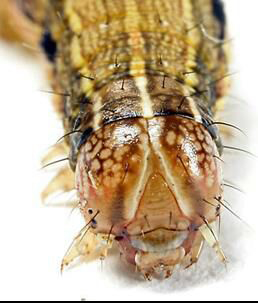 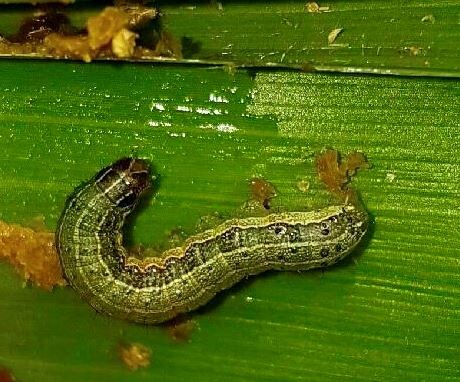 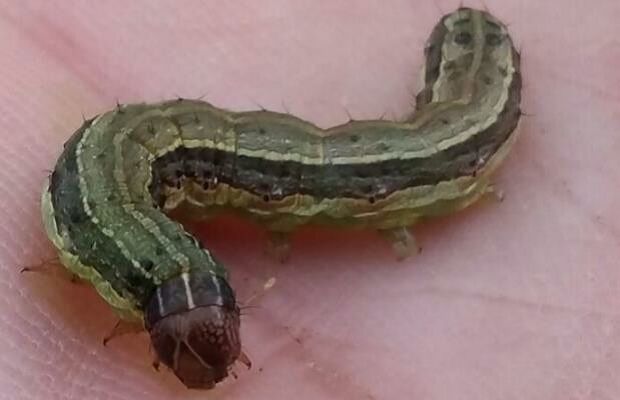 “Producers who planted YieldGardII® Bt-maize containing Monsanto’s MON89034-technology this year, will have an additional advantage as it also offers protection against infestations of the Fall Armyworm (Spodoptera frugiperda),” according to Kobus Steenekamp, Managing Director Monsanto SA.

In its endeavours to assist producers with the outbreak of Fall Armyworm in South Africa, the Department of Agriculture, Forestry and Fisheries (DAFF) with the established Plant Pest Action Group is urgently calling on all producers to notify Grain SA of any suspected Fall Army worm detected.

Daily notifications and/or updates from our farmers with Fall Armyworm is encouraged as this information will assist with the Action Group’s planning.

Please send through the following information:

Complete the above information and e-mail to members@grainsa.co.za or Fax to 086 724 2764. Completed information will be kept strictly confidential and used for FAW Armyworm reporting purposes only.

TAKE A CLOSER LOOK AT THE FALL ARMY WORM

Fall Army Worm (FAW) is a quarantine pest for South Africa which has a wide host range and can affect crops such as maize, sorghum, soybeans, groundnuts and potatoes. Damage reported in South Africa so far is mainly on yellow maize varieties and especially on sweetcorn as well as maize planted for seed production. Reports of caterpillar damage have been received mainly from the Limpopo and North West provinces.

The Department of Agriculture, Forestry and Fisheries (DAFF) today received a diagnostic report from the Agricultural Research Council, Plant Protection Research Institute (ARC PPRI) to confirm that the Fall Army Worm was positively identified from samples collected in the Limpopo Province. The samples were jointly collected by scientists from the ARC Grain Institute and the North West University. These were caterpillars that had to pupate and emerge as moths before a positive identification could be done.

Please take note that chemicals are not registered in maize for Fall Armyworm. Therefore all application of chemicals must be carried out in consultation with chemical representatives.

The Department of Agriculture, Forestry and Fisheries (DAFF) received several reports from farmers of an unidentified Lepidoptera pest causing damage to maize between 16 and 27 January 2017. However the pest was observed on maize by some South African producers since December 2016.

Possible pest notifications of Spodoptera frugiperda, Fall Army Worm or FAW have already been received since the initial pest alert. Several possible outbreaks were reported in different areas in Limpopo, North West and the Free State and several specimens were collected by the ARC and NWU. There is a very high probability that FAW was indeed collected. Collected specimens will be identified by a taxonomist to confirm the presence of the pest.