Alternaria species affects all aerial parts of the plant such as the leaf, petiole, stem, floral parts and seeds of sunflower plants during emergence and throughout the growing stages of the plant (Malone and Muskett, 1997). The symptoms caused by Alternaria species on sunflower normally appear as dark brown, oval to circular spots with a pale margin and yellow halo. The spots become irregular by coalescing, leading to blight and defoliation and death of the plant (Cho and Yu, 2000). 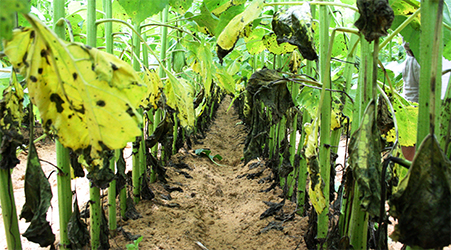 Epidemics of Alternaria blight of sunflowers are most common and severe in areas that experience extended periods of wet weather in summer accompanied by mean daily temperatures between 25 and 30°C (Reis et al., 2006). Alternaria species are reported to reduce seed and oil yield by 27 to 80% and 17 to 33%, respectively, and can cause germination losses (Calvert et al., 2005). The disease significantly reduces head diameters and numbers of seeds produced per head. The reduction in seed content caused by Alternaria blight is an economic concern, because growers receive a price premium or a dockage based on oil content (Carson, 1985).

Cultural control is currently the most effective method of Alternaria leaf blight disease management; as it mainly aims at reducing the amount of inoculum in the field. Alternaria is a polycylic pathogen, meaning once the inoculum is established in the field, it will cause re-infections until harvest whenever the environmental conditions are suitable for disease. Below is a list of recommended cultural practices that can be implemented to prevent inoculum build-up:

There is presently no fungicide treatment for Alternaria leaf blight, but preliminary seed treatment and spray programmes using strobilurin based fungicides have shown positive results in reducing infection levels.

Phoma black stem symptoms can mostly be observed post bloom or after flowering. The main identifying symptom is the dark brown to black lesions on the stem at the base of leaf petioles. Large, dark lesions may form on foliage and flowers bracts, back of the head, and crown or base of stalk. Internal decay of the stalk and leaf wilting will also be noticeable. Small, fruiting bodies (pycnidia) are produced on the stem, these structures are spore bearing and can be observed with a magnifying or other hand lens. The fungus also produces colonies that are gray-white in colour and have a white mycelium that may resemble cotton.

Phoma macdonaldii (teleomorph Leptosphaeria lindquistii) is the causal agent of black stem disease of sunflower (Helianthus annuus L.).  Primary inoculum originates from over-wintering fungal structures (perithecia, pycnidia, and mycelia) in crop debris and can also be seed-borne, which are spread to healthy plants by splashing rain; by windblown ascospores and fungus can also be disseminated by insects such as Apion occidentale and Cylindrocopturus adspersus stem weevils, which feed on sunflower. The conidia produced during wet and humid weather with high temperatures.  Phoma macdonaldii penetrates into the plants either directly via enzymatic degradation of the plant cell wall or by mechanical pressure, or indirectly through wounds and natural openings such as lenticels and stomata

Infection by Phoma black stem occurs at all phenological stages and on all sunflower organs.and has been reported to cause yield losses up to 70%.The resulting symptoms of Phoma black stem are again stunted plants with thin stems, smaller heads, blackened pith; reductions in oil content of the seeds and thousand-seed weight and premature death, referred to as ‘early death’ or ‘premature (this affects the grain filling process).

Cultural control is currently the most effective method of Phoma black stem disease management; as it mainly aims at reducing the amount of inoculum in the field. Below is a list of recommended cultural practices that can be implemented to prevent inoculum build-up: