The soybean looper is very similar and often confused with cabbage looper (Trichoplusia ni) where they occur simultaneously (Smith et al., Undated). The destructive stage of this pest is the caterpillar stage which is identified as a light green caterpillar with white thin lines running the length of its body. Its body is largest towards its rear and it tapers towards the head and it has two pairs of abdominal prolegs (segment 5 and 6) and a pair of prolegs towards the rear end (segment 10). Due to this arrangement of its limbs, the caterpillar compresses itself and forms a characteristic loop or hump when it crawls (Iowa State University, Undated; Reisig and Herbert Jr., Undated).

Eggs: Female moths lay eggs individually on the lower canopy half leaves, usually at night. Eggs are pale yellow-green, ribbed and hatch in 3 to 5 days. Females laying an average of 600 to 700 eggs. 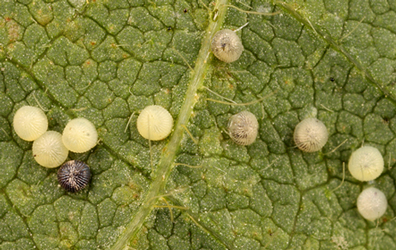 Larvae:  Young larvae are green all over but medium larvae usually have prominent dark and white striping while mature larvae are usually green with white stripes. Larvae develops through six instars and reach a maximum length of about 4.5 cm. Young larvae feed on the lower half of the plant and as they grow, they move up the plant, feeding on host leaves for about 2 weeks before pupating.

Fig. 2: A) Soybean looper on a soybean leaf with its characteristic looping motion. B) Larvae feeding on leaves, also showing the tapered body of the worm.

Pupa: Larvae spin a loose, thin, white silken cocoon on the underside of leaves in which they pupate. Pupae are green (dark above and pale underneath) and the stage lasts for a week. 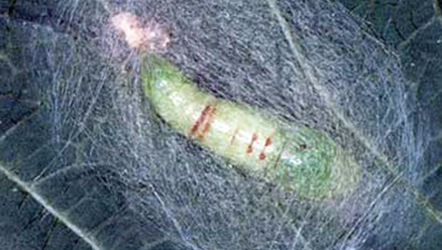 Fig. 3: Green larvae on the underside of soybean leaves.

Adult: The moth´s forewings are very distinctive: brown with a large, bright gold patch. The hindwings are fawn-coloured, darkening towards the outer margins.

It takes about 25 to 30 days for development from egg to adult.

Soybean looper larvae can cause major destruction, with individual caterpillars consuming as much as 140 cm2 of foliage, most of which takes place in the 4 to 5 days of the larval stage. They prefer feeding on the lower one-half to two-thirds of plant canopies which may escalate to defoliation of the entire canopy during heavy infestations. Unlike other foliage consuming caterpillars, soybean loopers feed from the inside out on the plant canopy. The pattern of feeding on the inner canopy and the position of soybean loopers on the leaf make spotting early stage infestations difficult and also makes good insecticide coverage extremely important for successful control (Smith et al., Undated). Large populations of soybean loopers are usually observed during late season which puts later-maturing beans at risk to infestation (Sterwart et al., Undated).

Chemical control: The only registered chemical product for the pest in South Africa is Ampligo (Syngenta®) - A translaminar, encapsulated suspen­sion flowable concentrate insecticide with contact and stomach action for the control of various pests on crops as listed. The active ingredients in the chemical are: Chlorantraniliprole (100 g/l) and Lambda-cyhalothrin (pyrethroid) (50 g/l).

In the US, the rule of thumb is that chemical control should only be applied at the threshold of 15% defoliation throughout the canopy. This is used for soybean loopers and also other defoliating pests.

Conservation of natural enemies: Soybean loopers in summer pulses are attacked by numerous predators and parasites, so farmers should aim to conserve these natural enemies. The use of Bt for looper control will help preserve beneficial insects and also reduce the risk of subsequent whitefly and mite attack (DAF, 2010).