Outsmart fungi from infecting and colonising your maize

The fungi that produce mycotoxins in grain are broadly placed into two groups: Those that invade before harvest, commonly called field fungi, and those that occur only after harvest, called storage fungi.

These fungi can produce mycotoxins called fumonisins (F. verticillioides), deoxynivalenol and nivalenol (F. graminearum) and aflatoxins (A. flavus) respectively. Furthermore, F. graminearum can produce an estrogenic metabolite called zearalenone. Fungal infection and colonisation of grain can lead to poor grain quality, whereas mycotoxins can have a negative health impact on humans and animals.

For a fungal disease to occur pre-harvest, there have to be inoculum present (fungal spores), the environmental conditions need to be favourable (humidity, temperature, rain, wind) and the host plant needs to be present. To make it more complicated, these requirements differ from one fungi to another.

After harvest, when grains or seeds have become moribund or dormant as a result of drying, associations between fungi and plants disappear and physical factors dictate if storage fungi will colonise grains. The primary factors influencing fungal growth in stored food products are the moisture content (more precisely, the water activity) and the temperature of the commodity.

In South Africa, A. flavus is not a problem in commercial maize grain. Our main research focus is therefore on F. verticillioides and F. graminearum and the mycotoxins that they can produce.

Through continued funding by the Maize Trust and National Research Foundation with local and international collaboration, our mycotoxin research commenced at the ARC-Grain Crops in 2010 with Prof Bradley Flett, Drs Belinda Janse van Rensburg, Aneen Schoeman and Edson Ncube.

Altogether five Honours students, five MSc students and five PhD students were successfully trained at ARC-Grain Crops. In this article some of the highlights of our research regarding F. verticillioides (Photo 1) and resultant fumonisin production in maize grain will be shared to emphasise the importance of continued research and the benefit thereof to maize producers. 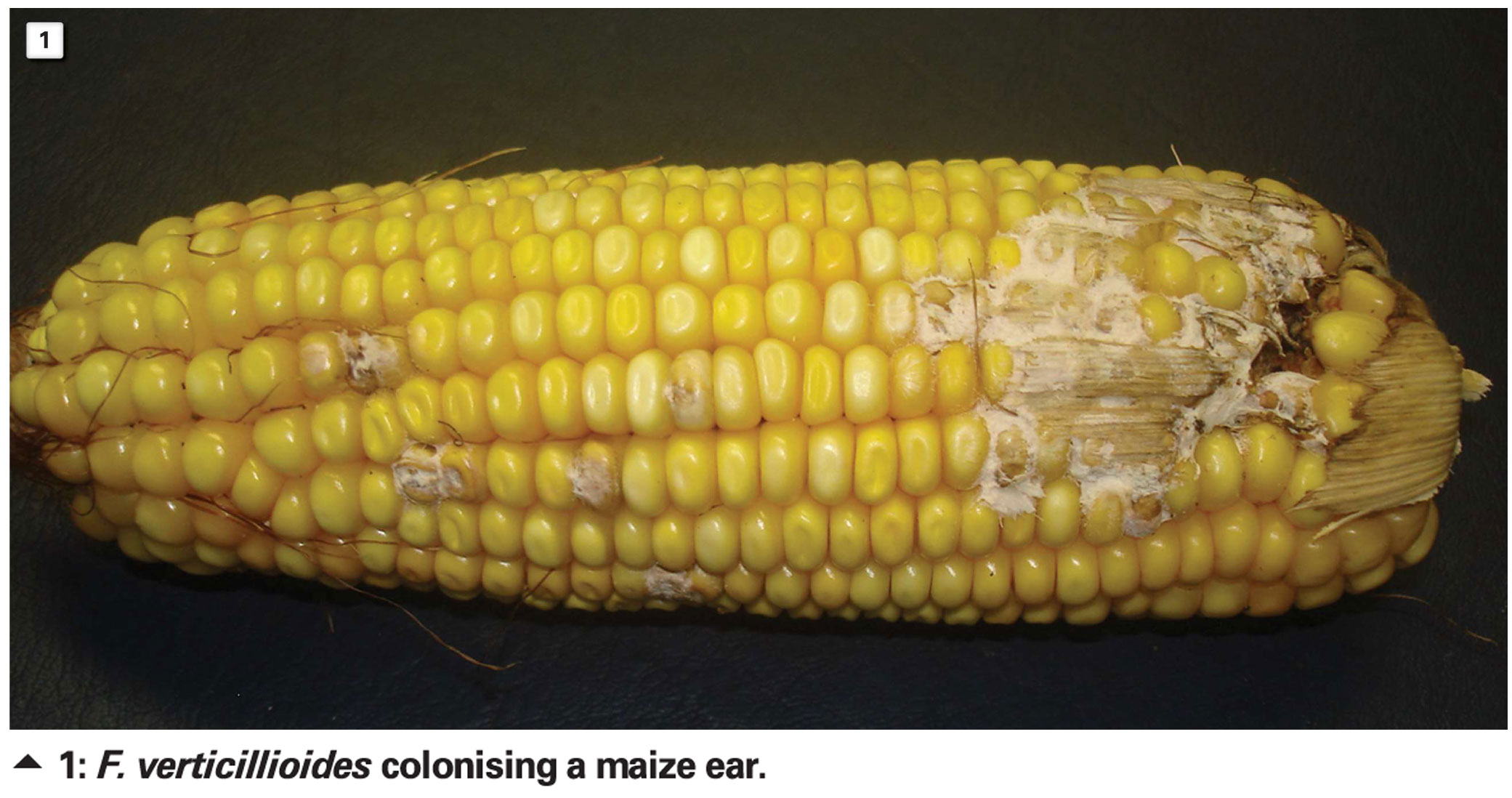 A study was conducted by Dr Schoeman to determine whether endophytic (symbiotic association with the maize plant) and pathogenic (disease causing) isolates from distinct maize tissues differ in their ability to cause disease and produce fumonisins. Both endophytic and pathogenic F. verticillioides isolates tested were able to cause ear rot, despite the tissue they were collected from.

In the cooler areas of Mpumalanga, KwaZulu-Natal, Gauteng and some areas of the eastern Free State, where mean maximum temperatures ranged from 24°C to 27°C, fungal biomass and fumonisin levels were absent or low.

With this information, prevailing weather conditions, F. verticillioides infection and fumonisin production were studied further. Research showed that maximum temperature and minimum humidity at one to 14 days post-silking is the most favourable for F. verticillioides infection. A statistical model showed that colonisation of maize tissues during the early post-silking stage and the dough stage of grain fill is favourable for fumonisin production. 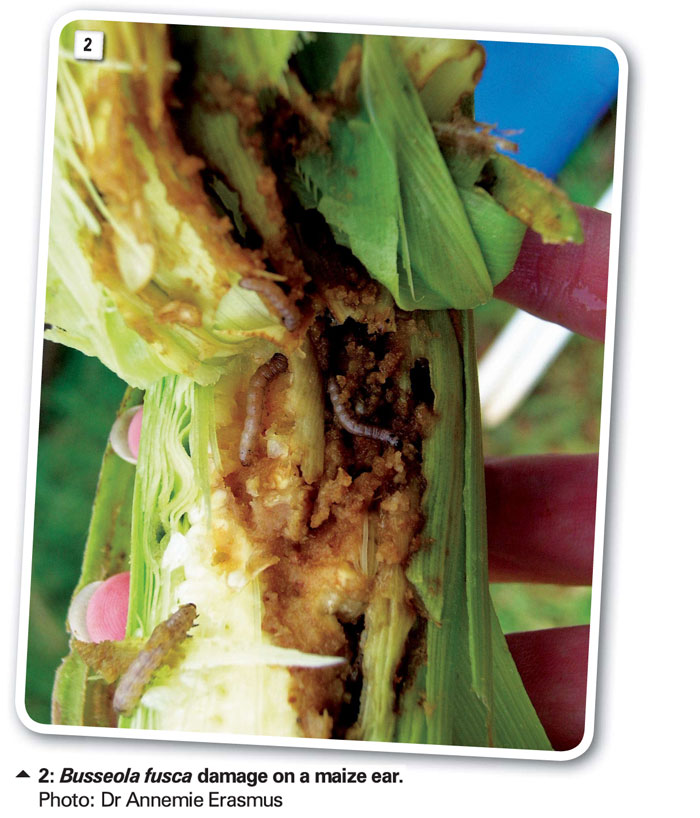 A study by Dr Ncube showed that Bt-technology decreased the risk of B. fusca damage (Photo 2). This is of importance because it was also illustrated that B. fusca not only vector F. verticillioides, but other ear rot and mycotoxin-producing fungi.

Because F. verticillioides isolates do not differ in their choice of infection (roots, crowns, stems, ears) it is important to keep inoculum levels low by means of sanitation practices. Remove maize stubble and weeds on which the fungi can overwinter. F. verticillioides prefer warm, dry conditions for infection and maize plants is most susceptible to fungal infection post-silking. Maize in warmer areas can be planted later in the season, and irrigation one to 14 days post-silking can reduce fungal infection.

ARC-Grain Crops is currently screening hybrids and cultivars for resistance, but in the meantime, producers can make use of Bt-technology, which decrease B. fusca damage. These stem borers are vectors of F. verticillioides and spread the fungal spores as they move on the maize plant. They also inoculate maize plants with the fungi as they feed on the stems and ears.

It is important to choose cultivars that is adapted to the environment and to use plant densities responsibly as it was proven that F. verticillioides and fumonisins increase as plant densities increase. Through science, we are jointly responsible with producers to achieve high yields and still produce good quality grain, which is safe to consume by end users.