Outlook for the coming production season

South Africa is generally a net exporter of maize in a normal year. This means that under normal conditions South Africa is a surplus producer of maize and therefore exports more maize than it imports. During the 2014/2015 marketing season, South Africa imported a total of 65 000 tons of maize. This figure only refers to yellow maize as no white maize imports were needed.

During that same year, a total of 2,15 million tons were exported. The situation did, however, start to change with the effect of the drought experienced in 2015/2016 marketing year, which turned out to be the worst drought in 104 years. This placed a massive burden on the South African maize production. South Africa had become a net importer of maize in the 2015/2016 marketing season for the first time since 2008.

The effect of the drought had spilled over to the 2016/2017 marketing season and the total area planted for the 2016/2017 marketing season was 1 946 750 million ha. According to the final Crop Estimates Committee (CEC) production estimate for the season, the white maize production for the season is 3,25 million tons on 1,015 million ha – which gives an average yield of 3,21 t/ha.

Graph 1 provides an overview of historical maize plantings, which includes white maize and yellow maize over the past ten years, indicating the impact of the drought from 2015 to 2016. The five year average area of total maize planted, without considering the 2016 season since this was an outlier due to the drought, is 2,639 million ha.

In the National Crop Estimates Committee’s first intention to plant report the estimated 2,463 million ha of total maize to be planted for the 2017/2018 marketing season shows an increase of ± 26,5% from the previous season.

This includes the 43,4% increase in the white maize area as well as the 8,2% increase in the yellow maize area estimated to be planted for the upcoming season. The estimated plantings for the season are, however, still lower than the five year average and only shows a slight increase from the previous season (Graph 1).

Given the above-mentioned intentions to plant maize for the coming season, it is important to consider the possible outcomes which can be expected given different scenarios during the season. The supply and demand estimates are a good indication of possible outcomes for the 2017/2018 marketing season.

The supply and demand scenarios are compiled by determining the average yield for both white and yellow maize over the past ten years without considering the highest and lowest yields during this period – since they are seen as outliers.

The average yields realised over this period for white maize and yellow maize were 4 t/ha and 4,9 t/ha respectively. These were then used to determine the yields for an average season. The lower and higher yields that were used for this assumption were the averages of the yields below and above the average that remained in the equation as mentioned above.

Given a situation where there are possible lower than average yields for both white (3,4 t/ha) and yellow maize (4,6 t/ha) a total South African crop of 9,584 million tons is possible. This will, however, not be sufficient to meet the South African demand and in such a case South Africa is likely to remain a net importer of maize during 2017/2018 – with most of the imports being yellow maize.

In a normal year with average yields the total local production may reach up to 10,759 million tons. This could leave South Africa with a surplus of white maize – given the assumption that the white maize consumption remains relatively constant, while the yellow maize markets will still be dependent on imports for the season.

If high yield scenarios are likely for the coming season, the possibility could arise that South Africa might have a total crop of 11,845 million tons. This can result in a good break-even and even a small surplus situation. South Africa might be a net exporter of maize as no imports of white and yellow maize are likely to be needed to meet local demand.

During times of a surplus production of maize, more white maize is likely to be substituted in animal feeds rather than exported, due to the limited white maize consuming markets. The surplus of maize might then cause the prices to trade close to export parity levels (Table 1). 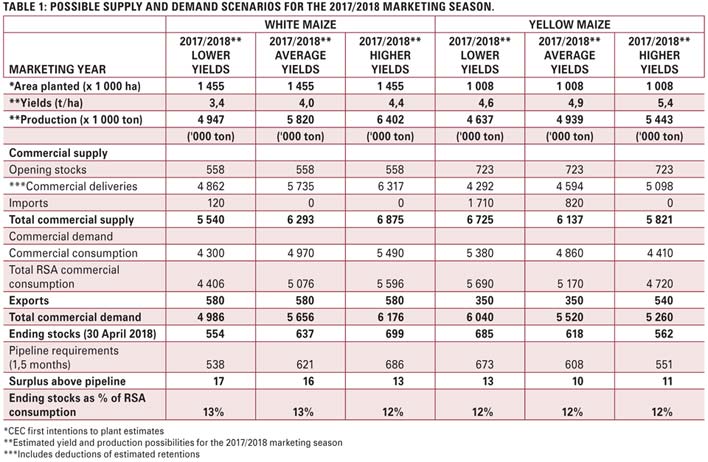 There are, however, still a few uncertainties in the market ranging from weather forecasts to the macroeconomic environment – which can have a severe impact on the prices.

One important thing for producers is to identify the possible risks that may arise during the coming season, whether it is production or pricewise.

Once one knows what the possible risks are, one can start thinking of the different opportunities that arise when managing the manageable risks. Price risk can largely be managed by hedging or by means of diversification of crops.