Our grain producers did not just give up during the drought

One issue that was conspicuous for me during this year's Grain SA Congress, was that our grain producers have definitely not given up during the drought. They discuss the future, and still dream about the future. This truly encouraged me.

The pain of the drought still has to be dealt with, but planning for the next season must continue. Even after two days of sitting for hours on end to evaluate mostly difficult scenarios, the new Executive sat down, considered and dealt with the invidious issue of the representation of our new era farmers in the various Grain SA structures.

Well done gentlemen…and lady! Welcome to the second female in the Executive – Preline Swart. Moreover, she is the first woman on Grain SA's Executive Committee and we look forward to her contribution in the time ahead.

It seems like the round tables and voting equipment made a significant contribution to Congress. We experienced very good participation in the discussions and quite quickly conducted surveys to obtain the opinions of all. It literally hummed.

The Executive Committee and the staff will analyse the results to guide and lead us into the future. Although the scenarios sketched by Mr Hamish McBain to the grain producers were somewhat more negative than positive, they are the facts we have to face. Grain SA will definitely have to focus to ensure that we can continue to produce sustainably and that South Africa may continue to enjoy the privilege of food security.

One of the extremely encouraging observations this past month was the first Alumni function of about 40 of our young leading grain producers who have already attended the Grain Academy. Syngenta organised the function for us and the guys could share their stories of what have since happened in their lives and farming practices. It was moving, to say the least. 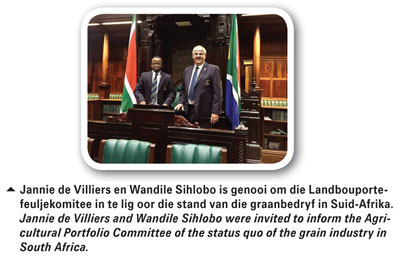 The guys shared personal matters of how the knowledge gained by them changed their lives and also the manner in which they deal with their families and workers on the farm. More than ever before, I am convinced that this investment can only benefit our grain leadership in the future. I am looking forward to the participation of these people in our Grain SA structures.

This year, I listened carefully to the State of the Nation (SONA) address of our President to determine how he perceives the drought. The disruptive events during this debate left one wondering whether the leaders of our country still focused on the country and its people and not only on their own political careers. I have, however, in my more than 30 years in the grain industry never heard of a Grain SONA. Well, that is what Wandile Sihlobo (economist: Grain SA) and I experienced on 19 February.

We were invited to inform the Agricultural Portfolio Committee of the status quo of the grain industry in South Africa for three hours, uninterrupted. The parties that attended this session cooperated and the questions following our presentation, encouraged me to believe that our message was taken to heart.

So, we have to sow in the morning – and in the afternoon as well, because we do not know which seed will deliver the crop. Maybe, just maybe, the political drought during which we as grain producers were not heard, has come to an end.