Our 2017 Farmer of the Year finalists are… 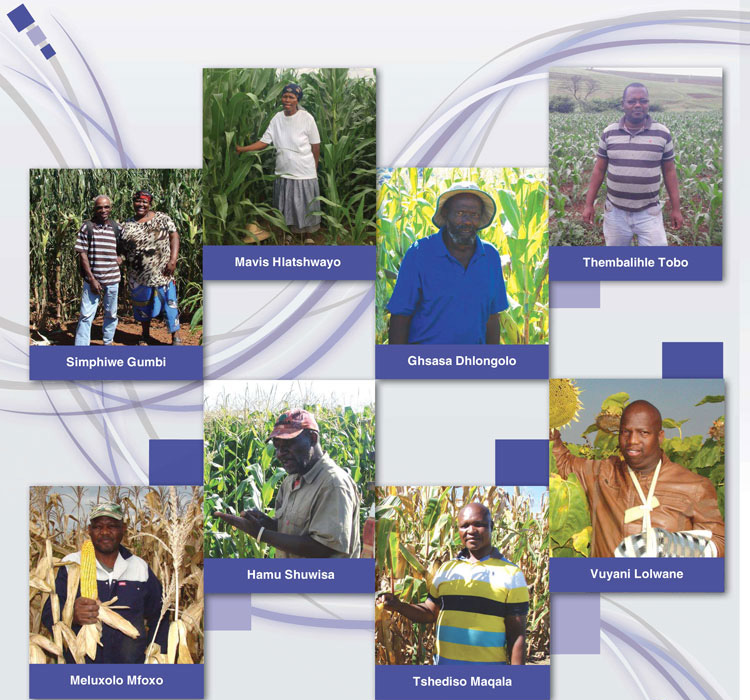 The celebration of success overshadows the challenges that were encountered along the way to get there. Farming is hard and challenges are plenty but these seem to be all forgotten as soon as a farmer can celebrate his or her success.

Nearly 20 years ago, the Farmer Development team of Grain SA proudly looked at the achievements of some of the farmers taking part in their programme and decided to set aside a Day of Celebration. The idea with this Day of Celebration was then, and still is today, to acknowledge farmers who put in hard work throughout the year and to showcase their successes.

Since its inception in 2009, the Day of Celebration became a highlight on the calendars of the Grain SA farmers as well as the Farmer Development team. It is important to also recognise the role that the Grain SA mentors and co-ordinators play in the success of the farmers under their wing. These people’s admirable dedication and passion are surely very important ingredients in the Farmer Development recipe for success.

In previous Pula Imvula’s we introduced you to all the candidates taking part in this year’s competition. Today, we can proudly announce the finalists of the different categories.

2017 Subsistence Farmer of the Year
Finalists in this division are Simphiwe Elliot Gumbi, Mavis Nomvula Hlatshwayo and Ghsasa Solomon Dhlongolo.

Simphiwe Elliot Gumbi
Simphiwe and his wife, Vuyelwa, farm on a portion of Hoffental farm near Tabhane in KwaZulu-Natal. The couple have no mechanisation and plants their maize by hand. They participated in the Grain SA Jobs Fund Project since 2015. Development co-ordinator, Graeme Engelbrecht says: ‘This is a dynamic husband and wife team with hearts of gold. They are pillars in their community and help those that are less fortunate by supplying them with food.’

Mavis Nomvula Hlatshwayo
Mavis farms on a hectare of communal land on the farm Hereford near Badplaas in Mpumalanga. She joined Grain SA and became a member of the Lijahsisu Study Group in 2005. She regularly attends study group meetings, workshops and courses organised by Grain SA.

Jerry Mthombothi, the Development coordinator has this to say about Mavis: ‘She is a remarkable woman who is always willing to learn. If you give any instructions to Mavis, she will do exactly what she’s told. She is generous and willing to share her knowledge with the less experienced farmers in her community.’

Ghsasa Solomon Dhlongolo
Ghsasa farms on 10 hectares of arable land allocated to him by the Kaluka CPA near Piet Retief. He is a member of the Grain SA Jobs Fund Project and chairperson of the Donkerhoek Study Group.

Development co-ordinator, Jurie Mentz says: ‘This farmer is an exceptional neat farmer. Ghsasa has always been a real trouper, a pillar of strength and role-model in his community.’

2017 Smallholder Farmer of the Year
The three finalists in this division are Thembalihle Hopewell Tobo, Meluxolo Mfoxo and Hamu Samson Shuwisa.

Thembalihle Hopewell Tobo
Thembalihle cultivates 25 hectares of the Ndunga communal land near Bizana in Eastern Cape. He became a member of Grain SA in 2006 and is currently the chairperson of the Ndunge Study Group. ‘Thembalihle is passionate about farming and keen to share his knowledge. The fact that he was elected to be the chairperson of his study group shows that the community looks up to this man,’ says Development co-ordinator, Luke Collier.

Development co-ordinator, Luke Collier: ‘Meluxolo is keen to learn and he works hard to achieve his goal of becoming a successful commercial farmer in the near future.’

Hamu Samson Shuwisa
Samson farms on a farm called Nooitgedacht, close to Sheepmoor in Mpumalanga. In 2011, he joined a Grain SA study group of which he has been the chairman for the past seven years.

‘Samson is an extremely hard working farmer. He started off cultivating 2 ha and gradually grew to where he is today – cultivating 18 ha with yields of 6 t/ha,’ adds Development co-ordinator, Jurie Mentz.

2017 Potential Commercial Farmer of the Year
Ruben Mothlabane, Paul Mvelekweni Malindi and Tshediso Daniel Maqala are the three finalists in this category.

Ruben Mothlabane
Ruben farms on the farm Kalkpan, in the Bultfontein district in the Free State. He has been a member of Grain SA since 2012 and diligently attends the monthly study group meetings of the Bultfontein Study Group. Development co-ordinator, Johan Kriel says: ‘Ruben has developed into a farmer with tremendous potential. He harvested close to 1 000 tons of grain this year.

Paul Mvelekweni Malindi
Paul farms on the 441 ha farm Dankbaar, close to Edenville in the Free State. He joined Grain SA’s Farmer Development Programme and was one of the founding members of the Edenville Study Group.

Johan Kriel, Development co-ordinator says: ‘Paul has an unquenchable thirst for knowledge. This year he has done everything right, he even drove the tractor all by himself.’

‘Even though Tshediso is relatively new to the programme, this farmer has the potential to manage a big commercial farm. He farms in a difficult agricultural area but has managed it magnificently,’ adds Development co-ordinator, Johan Kriel.

2017 New Era Commercial Farmer of the Year
The finalists in this category are Vuyani Lolwane, Remember Wiseman Mthetha and Edwin Thulo Mahlatsi.

Vuyani Lolwane
Vuyani owns Klippan farm and also leases land on Lareystryd. He has been a member of Grain SA for years and actively attends farmers days and study group meetings and has completed several of the training courses.

Development co-ordinator, Du Toit van der Westhuizen says: ‘Vuyani is an ingenious young man and a chip of the old block. He inherited his skills and business sense from his father and has all the attributes that’s necessary to become a very successful commercial farmer.’

Remember Wiseman Mthethwa
Remember farms on 662 ha of his own farm Milindale, and leases 150 ha of private land near Dannhauser. He joined Grain SA in 2015 and is an active member of the Newcastle B29 Study Group with Chris de Jager being his mentor.

Graeme Engelbrecht, Development co-ordinator says: ‘Remember is an extremely hard worker. He makes sure to do the small things right and does not wait for anybody to come with a solution whenever he encounters problems – Remember will make a plan.’

Edwin Thulo Mahlatsi
The farm Swartlaagte near Bothaville in the Free State was purchased from Frikkie Rautenbach for Edwin by the Department of Rural Development and Land Reform through PLAS. In 2014 he became a member of Grain SA’s Farmer Development Programme. He joined the Bothaville Study Group and attended farmers days and training courses.

Development co-ordinator, Johan Kriel says: ‘It is a privilege to work with Edwin – he is a meticulous farmer who loves to share his knowledge and is a pillar of strength in his community.’ With all these wonderful finalists in the run, we can once again look forward to a memorable Day of Celebration