With good soil moisture and early spring rains, summer grain producers are grateful, excited and full of hope for the new season, but input price increases threaten to put severe pressure on the profitability of grains and oilseeds.

Since South Africa is very dependent on imports of inputs, the recent input price increases in international markets have a significant impact on the sustainability of grain production in the local market. Increases in the international market were due to various reasons, including crude oil price increases including gas and coal, trade wars, logistical challenges with shipping and cargo containers, natural disasters, pollution laws and shortages of specifically energy resources (specifically energy) used in the manufacturing process, among others.

Input prices have risen on average over a one-year period, with seed by 6%; fertilizer by 128%; agrochemicals by 18% and fuel by 40% (internationally, a basket of energy commodities have basically doubled in the past six months).Taking these increases into account, a typical grain producer's direct input costs are 50% higher year-on-year.  Producer’s direct dependence on international markets – as  more than 80% of agricultural inputs are imported -  together with local infrastructure and unrest challenges further amplifies local input price increases. BFAP conducts an annual global benchmark study in grain-producing countries. From 2015 to 2020, South Africa's grain production costs were 60% higher per ton of grain. Excluding the 2015 and 2016 droughts, it is remains 29% higher. 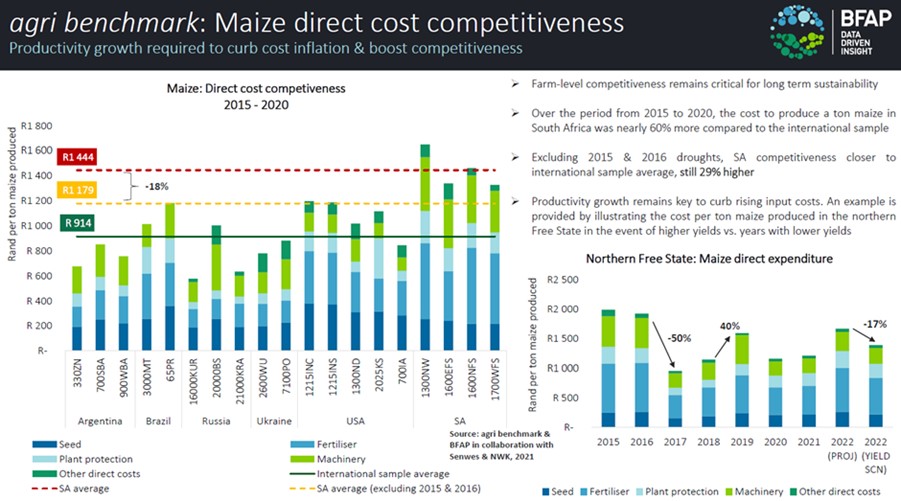 The impact on small-scale producers is even more detrimental because these farmers do not necessarily have the opportunity to make early purchases nor the benefit of economies of scale.

For South Africa to be competitive in the future vis-à-vis other grain-producing countries, actions will have to be taken to mitigate the risks of rising input costs and availability. One of the more difficult aspects for a grain producers to hedge and manage, is the decline and volatility of the Rand against other major currencies. In the short term, the solution to increase productivity and thus ensure optimal profit is achieved rather than maximum yield. This means more efficient and accurate utilisation and placement of inputs, which obviously requires technology.

Over the medium- to long-term, the local value chain role-players and the South African government will have to work together to implement plans effectively to ensure the risks of international availability of inputs and price increases are mitigated. It is also one of the main focus points in the Agricultural Master Plan discussions and negotiations. It provides the opportunity to ensure locally available resources, which are indeed viable, such as phosphates, are effectively exploited and processed to ensure local availability. Furthermore, the value chain should be compiled as short as possible with the necessary value additions still in place. The most important thing is that local development and adaptability are promoted to create a local market. It is important for food production that national strategic assets such as Foskor function effectively, in South Africa's interest. Shares of the Industrial Development Corporation (IDC) are currently available and possibly an opportunity for the private sector to make a difference.

As indicated by BFAP's analysis, droughts have a significant impact on competitiveness and the need from local producers for a programme where affordable and workable multi-risk insurance is available, remain. A sharp rise in costs, such as the current scenario further places pressure on producers' ability to recover after dry seasons.

Unfortunately, the further increases in fuel costs as well as the ongoing load shedding present challenges in terms of costs and thus profitability. Necessary infrastructure such as silo complexes and processing plants are halted, or need to use significantly more expensive alternative sources of energy, (diesel generators) generally placing further pressure on costs. Despite increased costs, it impacts the pace of the harvesting process and has a direct impact on the quality of small grains, especially in the winter cereal region which further increases risk in grain production. The international crisis has once again shown that South Africa's food- and fibre production is directly dependent on international factors and that it is critical to ensure that South African resources - where available - are processed and utilized effectively to make them affordable and available timeously. This requires an integrated value chain approach where the private sector and government must work together to mitigate the risks. The main goal is clear – to be able to place sufficient quantities of safe and high quality food, timely and affordably, on every citizen's table.