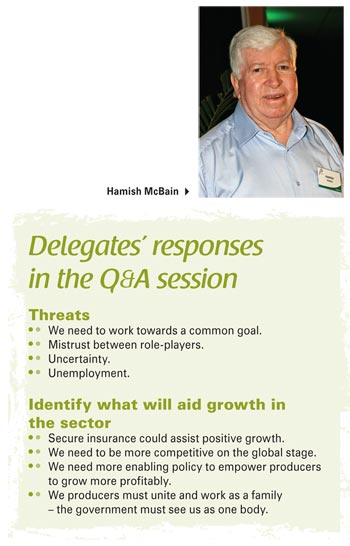 Retired CEO of Tiger Brands, Mr Hamish McBain, is not a pro ducer but an astute businessman who has gathered a life time of experience in the trading, shipping and processing of agricultural products in the local and international arena.

In considering the road ahead McBain observed that the climate is indeed changing – and by that he was not only meaning the weather. Talking to delegates at the 2016 Grain SA Congress, McBain looked at a number of scenarios on the global and South African stage.

His acute observations provoked one into thinking more strategically about the road ahead. This is particularly important in the light of the window of opportunity the agricultural sector has to make a positive contribution – ‘the door is standing slightly ajar’ for sector leaders to give input.

Because of the drought, government is concerned about food security,  among other issues. Time is ripe for organised agriculture to put facts on the table together with offers to help resolve burning issues burdening the sector.

The reality: The so-called free market is not really free at all

McBain maintains South Africa has been a naive player as far as agricultural marketing is concerned. Both the United States (US) and European Union (EU) have deliberately implemented complex agricultural subsidies and non-tariff barriers and strive to defend their markets.

The sugar trading environment is highly regulated; Brazil imposes export levies on soybeans and Canada and Australia influence wheat exports. The free market is not really free, but rather a function of political aims and economics. We all need to be more aware of the global political and economic environment.

Why do we need to become more aware of the global environment and the probability of developments when ‘forecasting the future is an exercise in futility?’

McBain says that by looking at scenarios, you consider alternatives and prioritise things needing your attention.

Global scenarios – ‘They will affect you whether you like it or not’
When one looks carefully at events, protests and uprisings around the world, the picture presented is one of hard times. The bottom line: Hard times are here to stay.

South African scenarios
In 2013 Clem Sunter listed a number of red flags for South Africa: A South African ‘Arab spring’, nationalisation, bungled national health insurance scheme implementation, land grabs and gagging the media. It is interesting to note that all of these flags are flying strongly in 2016. South Africa is in trouble.

What do long-time supporters of the ANC say? Anti-apartheid activist, RW Johnson in How long will South Africa survive?, looks at the massive corruption in the country and journalist and ANC member, Justice Malala in We have now begun our descent, expresses dismay at what is happening in South Africa today.

McBain also suggested that the International Monetary Fund  (IMF) prediction of South Africa’s GDP growth at 1,4% for 2015 and 0,7% for 2016 could very well be optimistic since the drought is likely to impact this further. Of concern is that a further downgrade by a credit rating agency will force overseas fund managers to offload.

South Africa is at a crossroad

South African scenarios and red flags according to McBain: 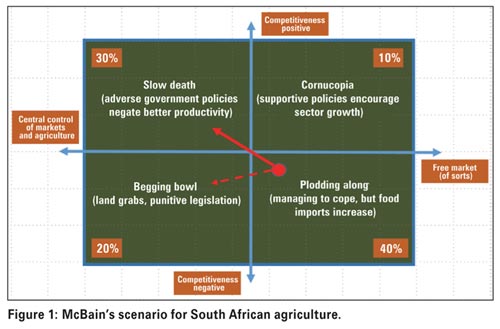 The consequences of this drought are enormous. The immediate impact will be on food prices and inflation.

Agriculture is just managing to cope. Right now it’s plodding along. Any disruptive legislation could push agriculture into a slow death scenario or alternatively any quick and drastic changes could give rise to a Zimbabwe-like begging bowl situation.

McBain said we must strive to push for the cornucopia scenario,  which he gives a 10% chance.

Challenges which need to be confronted and reach beyond the drought are of concern. In particular the supposed shared vision for a united and prosperous agricultural sector, whereas the reality is a serious disconnect.

Regarding food security and failure of land redistribution issues McBain said ‘Grain SA needs to document the facts (not only give an opinion), and put them in front of government with an offer to help to resolve the issues.’ He said working together as an interest group is more effective. Grain SA must find the solutions and change the perception of commercial agriculture. He also believes time is long overdue for an AgriDESA where government and the private sector work together to establish common goals.

A final call to action: