Debates about the current situation of the South African groundnut industry as well as its future sustainability, resulted in a decision by the Oilseed Advisory Committee to commission further research on the groundnut supply chain.

The Bureau for Food and Agricultural Policy (BFAP) was commissioned by the Oilseed Advisory Committee to compile a report covering all pertinent aspects of the industry, with an extensive focus on the supply chain.

The report included the following:

View the complete report at www.bfap.co.za.

The industry as a functioning body
First and foremost, co-ordination, transparency and collaboration are essential to secure the sustainability of the industry. A significant amount of distrust amongst individuals throughout the entire value chain dampens the incentive for the industry to expand and regain economies of scale to ensure consistent supplies of high quality groundnuts in local and export markets. Without the backing and cooperation of the large role-players, it is unlikely that the industry will embark on a turnaround strategy by itself that will be to the benefit of the industry at large.

Producer scepticism, production practises and prices
There is a certain negative “vibe” among producers. The perception is that potential profits do not weigh up against the price and quality risks faced by producers. Furthermore, the production of groundnuts is labour intensive and among some of the producers that were surveyed, the negative impact of what they regard as stringent labour legislation, was mentioned.

Alternative crops, such as soybeans, offer similar rotational cropping benefits as groundnuts and a rapid improvement in soybean cultivars has boosted the profitability of soybean production.

The stigma still remains that groundnuts are one of the most difficult crops to cultivate. Yet, a number of the large producers argue that with new production practises, there should be no reason for producers not to plant. Publishing a new updated production manual was also advised, giving step by step guidelines in cultivating top quality groundnuts. Improvements such as this could lead to gains of up to 0,2 ton/ha if done correctly, as well as a better grading for the groundnuts delivered and less risks for Aflatoxin formation.

Over the past five years the prices that were received by GWK closely match the export parity prices derived from the Argentinian and US prices. The question then remains, why are local prices in some seasons trading significantly below the export parity price for Rotterdam if most of our groundnuts are exported to European and Japanese markets? 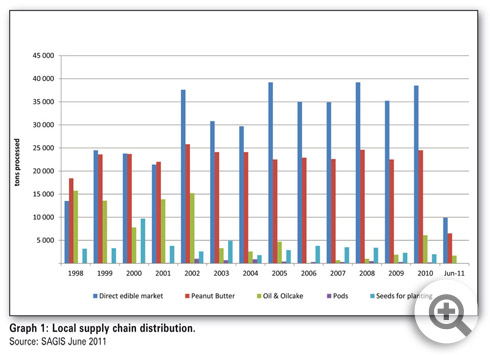 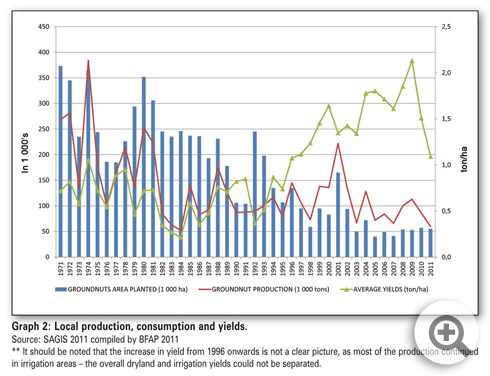 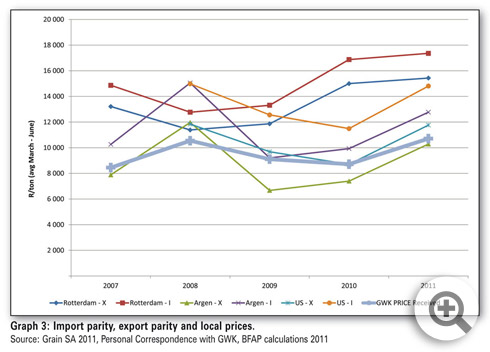 Yields and cultivars
The future of the industry will to a large extent be determined by the success of adapted new or improved cultivars, irrespective of the Spanish or Runner type or of the country of origin.

If the industry can manage to breed a high-yielding cultivar with the required quality specifications, South Africa could follow the same growth path as the US – when the Florunner cultivar was introduced.

There is hope for the industry given that South African agriculture has proven to be economically competitive in world markets. If the groundnut industry can become more efficient in eliminating impediments as mentioned in the report, it has the ability to become globally competitive once more.

The global demand for groundnuts seems to be secure due to large snack food markets in the EU and North America, and due to the utilisation of groundnuts in food preparation in the Mediterranean and India as well as Asian cuisines (ARD, 2008). If South Africa’s groundnut producers can regain their position in the export market, with the constant supply of the high quality product they used to produce, the industry can experience a revival.

One can ask what the future for the industry entails in the absence of a turnaround strategy. A plausible answer is that one could see in the near future that groundnuts will only be produced by the large existing firms (producers) and hardly any production of groundnuts will be viable outside of this production model.

The model of a few large firms producing all the groundnuts will continue until it is not able to compete anymore on export markets that are supplied by industries that do have the economies of scale with comprehensive research and development programmes.