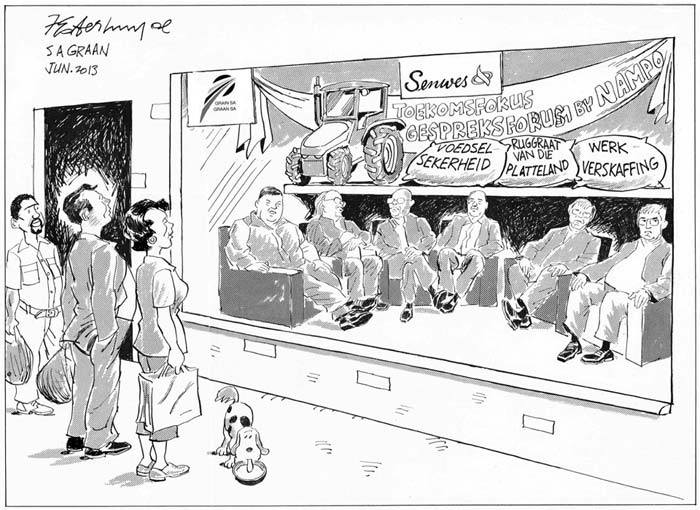 About two NAMPO’s ago, during a post-mortem session under a tree, the leadership of Grain SA concluded among ourselves that we could achieve much more out of Grain SA’s NAMPO Harvest Day than we were doing at that time.

We started focusing on a new side of NAMPO, namely to add a networking platform and image building action to the already successful basis established by our predecessors. In other words – creating a proper comparative event of all types of inputs, and to make a profit which Grain SA can utilise to deliver yet a better service to its members.

The networking opportunity presented by the NAMPO Harvest Day is like the free market – you need not promote it, it just happens by itself. It simply remains a pleasure to see the spontaneity of old friends and family when they run into each other on the NAMPO grounds.

My Harvest Day, however, kicked off on a very sad note when I had an emotional discussion with a producer and his wife about the impact of the drought on their farm.

On Friday, the last day of the Harvest Day, I gathered my two sisters and brother (and all my kids) at NAMPO just to spend the day with them and to enjoy the togetherness. My wife spent the whole week at NAMPO. Not only did I want them to see and experience everything there, I also wanted them, who have supported me through the years, to share what the NAMPO Harvest Day represents. For me it was a wonderful privilege!

What excites me more is the new direction our partners are taking on the “NAMPO” platform: The Discussion Forum of Senwes was an excellent example of it. I sincerely trust that this type of event will in the future add considerable value to agriculture.

To hear respected journalists and strong opinion formers in our society declare: “This is my first NAMPO and I am totally overwhelmed,” is not just good for our egos, but precisely what the Grain SA leadership a year or so ago, were dreaming about.

Another group who quietly met during NAMPO, was the Registrar for Act 36 and our CropLife partners, Syngenta and Bayer. I really do not know whether the registrar would otherwise have travelled to NAMPO Park for a day. For busy people it is a long way from Pretoria, but I am sure that we will be seeing many of these first time visitors at a Harvest Day in the near future.

Some of our other partners, such as Astral, have immediately delved into their pockets to start investing in the concept of partnerships and the image projected by NAMPO.

We are really quite humble about the manner in which Grain SA can assist the agricultural sector in the building of our image. It is nice to welcome the big political leaders of our continent with our farmers’ hospitality and to share our bits of grace with them. It was pleasant to explain to the Nigerian delegation how the private sector and the government in South Africa cooperate to maintain food security. It was a pure delight to see how father and son inspected tractors and no-till planters and calculating how to produce more food for the country. Positive people!

Thanks to the members of the Executive who invited people and brought sportsmen so that children at NAMPO could see and meet their rugby heroes in real life. Thank you to Prof Jonathan Jansen who helped us with his contribution and vision to see the better South Africa of tomorrow. Agreed, there still are a number of issues in agriculture that are not going in the right direction, but here in our own yard, things went pretty well this year.

On Saturday morning I woke late after wondering if I would ever recover from this week, but it was with a smile and a few new ideas for NAMPO 2014.

Many thanks to all who have contributed to the success of this highlight on our annual programme. To those who have not yet seen the platform – come and join us here at the Grain SA offices for a cup of coffee so that we may sketch even better pictures of a good future for our country. Our humble thanks to the Good Lord who makes everything possible.