Mycotoxins: A menace to animal health

Mycotoxins are small molecules produced as secondary metabolites by certain fungi. Currently up to 300 mycotoxins are known, but we will discuss those that have been proven to be carcinogenic or toxigenic.

Three mycotoxins of economic importance includes aflatoxins, fumonisins and zearalenone. These mycotoxins account for great annual financial losses due to human and animal health and condemned or downgraded agricultural products.

Acute or chronic mycotoxicosis (disease caused by mycotoxins) can result from exposure to feed or bedding contaminated with mycotoxins (cereal, hay, straw, pastures, or any other fodder). Chronic and acute effects of mycotoxins on animals (especially monogastrics) will depend on species and susceptibility of an animal within a species.

The mycotoxin involved, amount and duration of the exposure, age, health, and sex of the exposed animal and dietary status will also play a role in chronic and acute effects.

Ruminants are generally more resistant to the adverse effects of mycotoxins because microbiota in the rumen is capable of degrading mycotoxins. Sporadic outbreaks of mycotoxicosis in pets have also been reported. In 2012, contaminated dog food resulted in the death of 220 dogs in Gauteng, due to aflatoxicosis.

The cause of mycotoxicosis may not be immediately identified and they are not transmissible from one animal to another. Treatment with antibiotics will have little effect on the course of the disease. Outbreaks are often seasonal, because particular climatic sequences may favour fungal growth and mycotoxin production.

When inspecting the cause, a specific feed may be identified. Even though fungi are present in feed, it is not an indication of the presence of mycotoxins. Although some fungi have the ability to produce mycotoxins, they do not always produce mycotoxins.

It is therefore important to quantify these mycotoxins in feeds using various methods ranging from quick screening tests to more advanced methods used in laboratories.

The term mycotoxin was coined in 1962 when more than 100 000 turkey poults died in London, England. Turkey X disease was traced to the consumption of Aspergillus spp. (Photo 1) contaminated peanut meal.

The major aflatoxins are B1, B2, G1, and G2 of which Aflatoxin B1 is the most potent natural carcinogen known. Aflatoxin M1 and M2 can be produced in milk and dairy products. Aflatoxin contamination has been linked to increased mortality in farm animals and thus significantly lowers the value of grains as an animal feed and export commodity.

The fungi Fusarium verticillioides (Photo 2) and F. proliferatum have the ability to produce Fumonisin B1, B2 and B3 of which Fumonisin B1 is the most toxic. Fumonisin B1 can promote liver tumours in rats (Photo 3), pulmonary oedema in pigs and create lesions and holes in the brains (leukoencephalomalacia) of equids (Photo 4). Affected equids will start to stagger (Photo 5) and eventually collapse.

Zearalenone is mainly produced by F. graminearum (Photo 6) as well as other Fusarium spp. in maize, wheat, barley, oats and sorghum substrates. 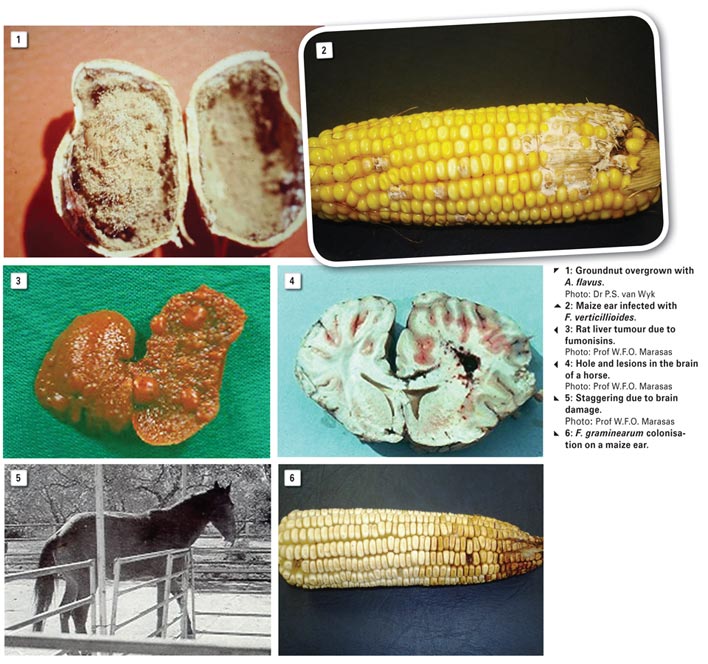 It exhibits oestrogen-like activity in certain farm animals such as cattle, sheep and pigs. At low doses it increases the size of mammary glands and reproductive organs. At higher doses zearalenone interferes with conception, ovulation, implantation, foetal development and the viability of newborn animals.

Early/timeous harvesting reduces fungal infection of crops in the field. It has been reported that early harvesting and threshing of peanuts can lower aflatoxin levels and increase gross returns compared to delayed harvesting.

During storage, transportation and marketing, maintenance of low moisture levels should be maintained. Sorting of visually damaged grains and separation from the bulk can remove a portion of mycotoxins. The removal and destruction of debris from previous harvests can minimise infection and infestation of produce in the field.

Chemical control could be applied during the production process to minimise fungal infection due to insect infestations.

The use of fungicides must be economic and not harmful to the environment and end users.

Breeding for resistance is one of the most promising long-term strategies. Sources of resistance in maize to Fusarium spp. and Stenocarpella maydis are currently being identified by the ARC-Grain Crops Institute (ARC-GCI) and will become public domain.

More than one mycotoxin can be present in feed, thereby making it difficult to rely on clinical signs alone. Certain mycotoxins are immunosuppressive, which may allow viruses, bacteria or parasites to create a secondary disease and therefore mask the effect of the mycotoxin alone.

When mycotoxicosis is suspected, corrective actions must be taken: