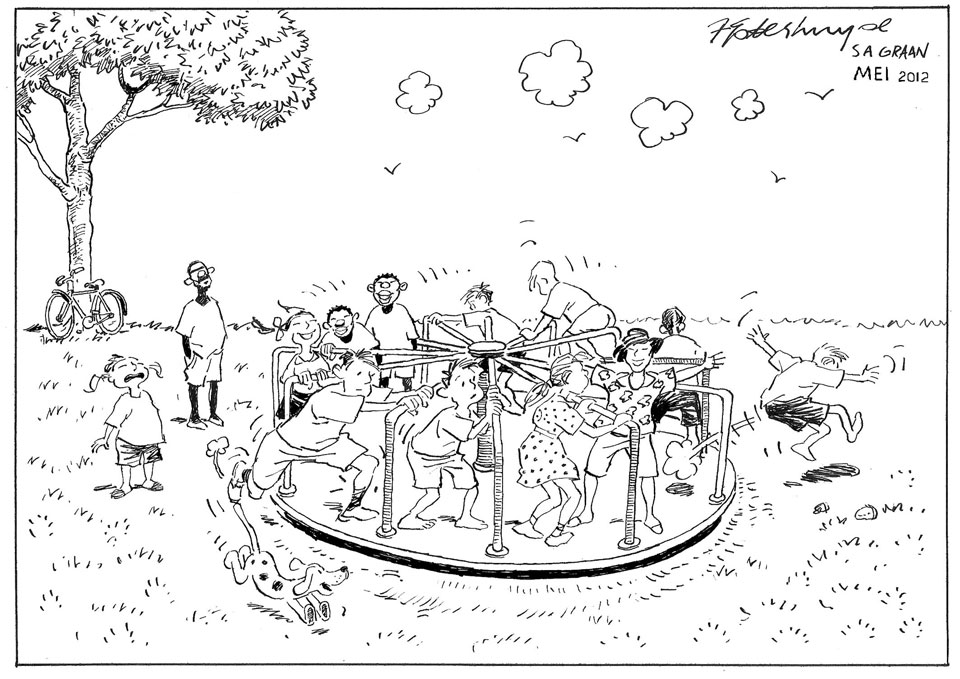 I am sure every one of us can recall from our childhood days playing around the merry-go-round in the playpark. A few kids would get on and generally the biggest and fastest of them would then start spinning the merry-go-round.

At first slowly and then faster and faster as the momentum builds. Then this kid would also jump on to join the ride for a few spins until the merry-go-round started losing momentum again and he had to jump off to start pushing yet again.

The timing was crucial – if you jumped too early, you fell and if you jumped too late, you lost so much momentum that the hard work had to start all over again. Sometimes the person did not join the ride at all, but rather just stood, waiting to push when the momentum dropped off.

Playing like this was very exiting, but it also had its risks. The squeals of the girls were encouragement for the boys who normally wanted to show off by spinning the merry-go-round as fast as possible. However, there was also getting nauseous and jumping off in the ride. This often led to skinned knees and bleeding palms.

With great energy and leadership, Grain SA and other partners created a momentum in the industry in 2011. About this we reported extensively during our regional meetings and Congress as well as in our annual report. The next phase is to keep this momentum going, with well-timed jumping off and with the application of the correct amounts of energy at the right time and places.

For this a lot of wisdom and focus are required. Our relationships as partners in the value chain are the grease that makes the wheels turn and the cheers of the members and consumers/clients is the encouragement to continue. The ecstasy is sustainable production profitability and market orientation for our members and food security – enough affordable food for an active lifestyle for our consumers as well as a happy society that can pursue their daily lives in peace.

There are also, however, risks such as forgetting to grease the merry-go-round – maintenance of the infrastructure and the party spoilers who stop the momentum just because they do not share the pleasure or just because they are jealous. Then those who provide the energy can also become tired; they can fall. Some of those on the ride can become bored and want to jump off or others have to jump off from getting nauseous. There is also those who just bully others and through selfishness, push them from the merry-go-round.

Why am I sharing these memories with you? Because I am wondering which one you are. Are you pushing daily by putting in energy; do you talk positively and constructively; is the pace at which you are running sustainable; or are you running at such a pace that you are only able to do two spins and then tire out? Are you maybe encouraging those who take the lead, to push? Haven’t you perhaps forgotten to grease the wheels, or are you pushing others off and begrudging them a place in this sunny South Africa? Or are you just standing on the sidelines causing everything to brake to a halt because you do not grant others anything? It is your call which one you are going to be!