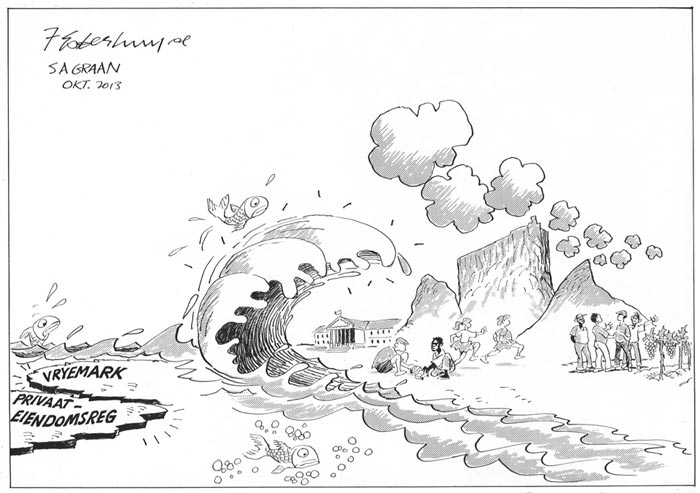 The months of August and September were really busy months for organised agriculture. The reason was the many radical recommendations and policy changes emanating from government circles.

It was not only the speed at which these changes were published for commentary, but especially the extent thereof that put pressure on our capacity to respond. It seemed as if everything that had to be completed in the past four years, were now to be put to bed in four months.

It is also a matter of debate whether two weeks for responding commentary could actually be considered as consultation with all the role-players. These, however, are the realities Grain SA has been confronted with the past few months.

An indication of the high level and also the extent of the nature of these issues are the fact that we were forced in almost all of the matters to take legal advice. Legal consultation becomes necessary when there is a good chance that the difference in opinion and viewpoints of our own leadership and that of the government are so great that we have to prepare ourselves for possible future legal battles in court.

Some people say “be calm, it’s only an election year!” Grain SA sincerely hopes that they are right come the middle of 2014, it would how ever have been plain irresponsible to have done absolutely nothing.

The issues I am referring to have to do with what I call two tectonic plates deep under the sea in the earth’s core upon which our economy and society is built, namely the free market and private property rights. The most recent suggestions for changes to the marketing act are focused on giving the Minister of Agriculture more control over agriculture. Such as control over the import and export of grains and control over all the funds and expenses of the agricultural trusts.

Should the minister be of the opinion that it is election year and that food in South Africa must be cheap for the electorate, she can prohibit all maize exports and the surplus can then depress prices of local maize allowing her to succeed in her goal. The next year just about nobody would plant maize because prices would not cover their production costs; and then grain prices will sky rocket and the agricultural sector will be labelled the guilty party. The free market has since 1997 (16 years) built a remarkable record of ensuring food security for South Africa.

It is rather like being guilty until being proven innocent. Minister Nkwinti’s suggestions to distribute your land to the workers in accordance with their years of service, places the whole issue of private property rights with no compensation, on the table yet again. A typical reaction of producers could be to lay off their most senior and loyal employees for fear of such recommendations. This will be to everybody’s disadvantage.

The challenges for organised agriculture are huge! Should one of these tectonic plates shift, a tsunami will most certainly wash over South Africa. One can only wonder what the big food manufacturers and the country’s leaders think of this. It seems that it does not bother them. Don’t they know, or are we just too sceptical about such suggestions?

On top of this all it was once again time to announce the wheat price differential. The large numbers of emails and telephone calls just confirmed that the Grain SA members are very active. This is very healthy. We even received calls from non-members!

The impact and the principle of the differential have been debated and argued for many hours. I do not recall one aspect that has not been discussed at length. Hopefully there will be some good news for wheat producers by the time this editorial is in print. The ability to absorb all the pressure in meetings and in the media and reduce it to behind the scenes negotiations in order to achieve the strategic goals of the organisation, takes some skill and patience.

We wish the winter grains producers a fruitful harvesting time, especially after the good rains in the south, and may the rains in the north come early for a better summer season – especially for the men and women of the North Western Province!