Market overview of grain and oilseeds

Throughout November 2013, there have been significant movements on the international and domestic maize, soybean and wheat markets; as well as notable volatility on the exchange rate.

Maize markets
On the maize markets, prices have been moving sideways, mostly pressured by large expected global supplies coupled by a slower import demand from China. On the side, an increasing demand from the world market provided some support for maize prices; with South Korea, the EU and Japan among the top importers.

Natural disasters have also negatively affected maize production, with most highlights on the recent typhoon in Philippines that damaged about 153 495 hectares of their arable land, of which 20 951 is for maize.

In the Southern African region, Zambia is still experiencing dry conditions and soil moisture is not sufficient for 2013/2014 maize plantings. Drought conditions in South America have negatively affected maize production, the Argentinean maize area forecast has recently been decreased by 0,2 million hectares to 3,3 million hectares.

On the other hand, the US has been experiencing favourable weather conditions, thus positive harvest progress. However, the US market has recently faced some disappointing news from the Chinese market; China rejected US maize exports due to unapproved GMO variety.

Soybean market
Soybean markets have also experienced some sideways price movements with a lot of pressure on soybean prices coming from South America.

Dry conditions in Argentina have resulted in a decrease in the area planted with maize, which was substituted by soybean production. The US has had favourable weather conditions which gave support to the harvest progress. Furthermore, increasing demand from the world market also added some support for soybean prices, with South Korea among the top importing countries.

Wheat markets
On the wheat markets, wheat prices have largely been supported by an increasing demand from Egypt, Japan, Lebanon, Bangladesh, Chinese Taipei and South Korea.

Brazil’s Agriculture Ministry announced that the government is planning to offer subsidised loans to producers in order to expand wheat acreage across the country. Brazil hopes to cut reliance on foreign wheat, particularly US and Argentinean wheat imports.

Furthermore, India continues to add pressure on wheat prices, the country’s winter wheat plantings for the 2014 harvest are estimated to be complete at 17,9 million hectares, compared to 15,8 million hectares at the same time last year.

The rand continues to trade at low levels (Graph 1), currently trading around R10,30 to the dollar. The recent pressure on the rand value came after South Africa’s third quarter GDP growth eased to 0,7%, from an upwardly revised 3,2% in the second quarter.

The main reason for lower growth in the third quarter was a 6,6% contraction in the manufacturing sector, which was caused by widespread strikes in the motor industry. Furthermore, a strong US Purchasing Managers Index (57,3) raised concerns about tapering of stimulus measures. Concerns about the local current account deficit also added some pressure on the rand value. 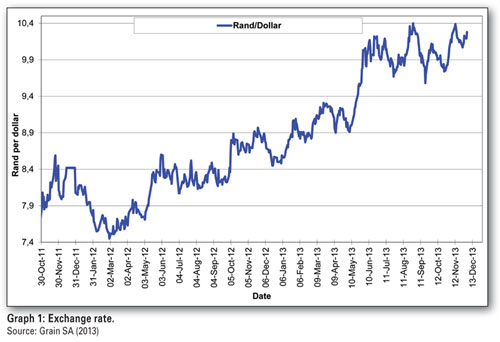 Graph 2a and Graph 2b show the final area planted and crop production figures for 2013/2014. According to the Crop Estimates Committee (CEC), the final calculated size of the commercial maize crop is now at 11 690 000 tons, which is 0,28% less than the final September crop estimate figure of 11 722 550 tons.

The revised crop size for sunflower seed is now at 557 000 tons, which is 1,69% less than the September estimate of 566 600 tons. Soybean and groundnut crop sizes were also adjusted downwards by 0,33% and 1,89%, now being at 784 500 tons and 41 500 tons respectively (Graph 2b). The reduction in the white maize crop size is much evident due to the unfavourable weather conditions in most of the key producing areas. This may cause upward price trends for white maize in the long run.

Expectations of increases in the crushing as well as tight stocks for the current season is giving support to soybean prices, the Safex price for the nearest contract month (December 2013) is now trading at R6 660/ton, which 23% higher than the price levels seen last year at the same time.

Overall, there is still a large expected maize crop in the world market, regardless of unfavourable weather conditions in South America and Southern African regions. The rand is still expected to continue trading at low levels.