Management of wheat stubble and your choice of cover crops Wheat stubble to protect the soil.

The management of residue following harvest is very important, be that wheat stubble or possible cover crops. The management will play an important role in the success of the crop that follows.

Conventional or conservation agriculture practices will have different ways of dealing with the wheat residue. In conventional farming practices residue is incorporated into the soil through different tillage practices before the next crop is produced. It is certainly the easiest way of dealing with your residues other than baling it for animal feed or bedding. Unfortunately it is not a sustainable practice with huge amounts of carbon being lost in the form of CO2 during the tillage actions and with that the degradation due to a loss in soil structure. Removal of the stubble or residue for feed or bedding relates to a loss in nutrients from the system, resulting in increased fertiliser need during the next season.

This process leaves the soil bare without any protection against the elements such as rain and wind, which leads to excessive loss of topsoil through erosion. Conservation agriculture has the opposite in mind, with the retention of residue on top of the soil to prevent erosion, forming a protective layer against the elements. It keeps the soil cooler in summer, which helps protect the important microbial life in the soil. The latter management practice does not prevent a farmer from having animals grazing on the residue during the summer season.

At the Langgewens Research Farm of the Western Cape Department of Agriculture, near Moorreesburg in the Western Cape, four of the cropping systems tested include an animal factor which grazes on the pasture and wheat residue over the summer. The animals in these systems are managed in such a way as to ensure that no more than 50% of the residues are removed. In doing so you are able to retain enough cover on the soil.

The advantages of the grazing is a quicker recycling of nutrients through the animal and less soil cover eases the planting of the next crop, especially when you are planting with a tine seeder. The animals’ hooves also help to break up the residue into smaller sections to ease the flow of the residue through a seeder. Although full cover is preferable it can make life difficult during the planting action. 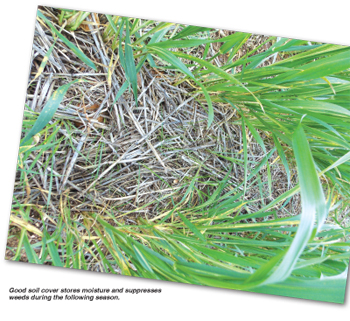 The management of cover crops depends on what the farmer want to achieve. If you planted a winter cover crop, the management will be determined by what the use of the crop will be. It could be used as a hay or silage crop, soil cover or even for grazing. In all these cases the cover crop will help with weed control. It is important that it is planted early in the season to extend the growing season for as long as possible. The longer the growth period, the more material is produced.