Making sense out of maturity types in beef cattle

Due to long term selection and possibly evolutionary changes to adapt to different environments and production systems, beef cattle breeds differ in mature size and therefore can also be classified as different maturity types.

Figure 1 is an attempt to illustrate three possible maturity types within a breed.

From Figure 1, the following can be seen:

These differences were already described by Brungardt (Brungardt, VH. Undated, Efficiency and profit differences of Angus, Charolais and Hereford cattle varying in size and growth, as quoted by Berg, R.T. and Butterfield, R.M. 1976), where he stated:

His last statement is especially significant when evaluating the value of feeding cattle differing in maturity type. Effectively, this means that the end-purpose of finishing cattle will determine the type of cattle considered due to differing feeding regimes, markets and also taking the ratio of feed and carcass price into consideration. 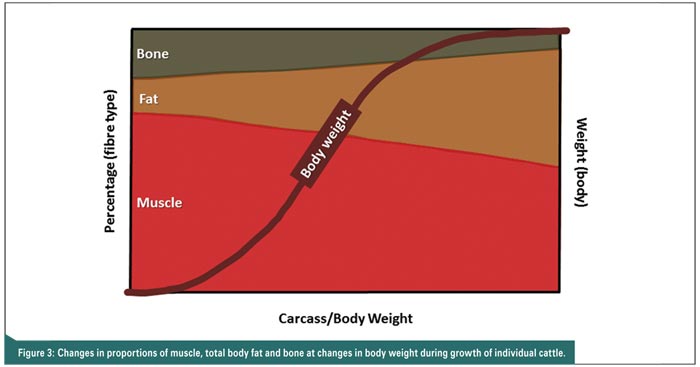 To clarify, Figure 2 and Figure 3 can serve as illustration.

The largest majority of the breeding cattle are dependant on natural grazing or planted pasture. This also places more perspective on the value of maintenance requirements of cattle under conditions of limited feeding, both in terms of quantity and many times also quality.

It is also a known fact that the first very important function to suffer from low levels of energy and protein feeding will be reproduction. Figure 4 illustrates the priority in nutritional needs and the impact of nutritional state on the allocation of nutrients in cattle.

Figure 4 indicates that, in order for an animal to survive, there will be priorities in the allocating of nutrients to different bodily functions. Obviously, the most important will be the maintenance of crucial bodily functions (such as the brain, liver, heart, etc.).

Due to the order of development, as illustrated in Figures 2 and 3, the order of allocation will follow the developmental path of bone, muscle and fat. In cases where the maintenance requirements are high, the other bodily functions will suffer or will not function properly.

It can generally be stated that later maturing animals, due to bigger body sizes, will have bigger maintenance requirements. Furthermore, in cases of lower grass cover (droughts, for example) more energy is needed
to ensure rumen fill (animals need to walk longer distances to take in enough grass) needing more energy and therefore elevating metabolism and subsequently maintenance, even more.

Cattle that are ill adapted (the anatomical and physiological process is not in tune with environmental constraints such as high/low temperatures, humidity, external/internal parasites, etc.) will result in the animal to suffer even more, often elevating the maintenance requirements further.

The reproductive rate in females (heifers and cows) is influenced by the energy levels in the body, as dictated by the total body fat. In these extreme cases where the animal is unable to take in enough or the quality of feed is inadequate, the reproduction process will be halted.

It is therefore important for primary producers to take the maintenance requirements of breeding females into consideration, while at the same time producing an acceptable product to the feedlots or other finishing units.

The genetic selection focus of primary producers should still, in order of importance, be:

Utilising the phenotypic and genetic variation among beef cattle to ensure profit at all levels of the production chain is important. There could be some kind of tension between primary producers and feedlots (or other finishers) regarding the traits and areas of importance.

It is however also important that the two groups should invest in the other’s well-being. Allowing for selection for growth should therefore also be a priority for seedstock (stud) breeders, while buyers of weaners should acknowledge differences in genetic merit among the bought-in stock and pay accordingly.

Utilising other means of reaping the full benefit of growth rate and efficiency differences as well as differences in maturity type performance in feedlots, are also possible. These include the correct use of cross bred cattle using sires of differing maturity types, depending on the price or feed margin, as well as the possibility of adjusting weaning ages or backrounding periods to allow for skeletal development to take place prior to finishing in the feedlot.