Make the choice: No-till or a conventional tillage system?

Profitability is one of the most important criteria that should be used to compare different tillage systems with each other. However, several other aspects must also be considered when deciding to change from a conventional to a no-till system.

The ARC Small Grain Institute (ARC SGI) in Bethlehem ran a demonstration trial from the 2001/2002 to the 2006/2007 production season in which maize and wheat were planted as rotation crops in both no-till and conventional systems.

The rotation of summer and winter crops implies long fellow periods of ten to twelve months between crops. This article focusses on the cultivation of maize when it succeeds wheat after a long fallow period.

DEMONSTRATION TRIAL AT BETHLEHEM
The demonstration trial was planted on a relatively homogeneous Avalon soil with a depth that varies from 500 mm to 600 mm. The soil pH was initially corrected by applying the necessary lime. The practices performed on the various systems, after the wheat was harvested in November-December, are shown in Table 1.

Table 1 shows that the no-till system relies exclusively on chemical control of weeds while the conventional tillage system uses mechanical and chemical control methods to control weeds. To eliminate the effect of different planting dates, both systems were planted on the same day in each season. However, planting dates of the different seasons varied according to the availability of rain.

The difference between inputs and cost per hectare of the two systems is compared in Table 2. To calculate the cost of the systems, the current list prices of the input providers were used. Cultivation practices have remained constant over time and therefore it can be assumed that the production cost of the respective systems have also remained constant over time if the prices of inputs are kept constant.

According to Table 2, the no-till system uses significantly less tractor hours per hectare and therefore fewer tractors and labour per hectare are required, which will result in some of the overhead costs being saved with this system. Because tractors work less in the no-till system, the diesel and repair bill is 54,4%/ha lower than with the conventional system.

YIELDS OF THE DIFFERENT SYSTEMS
Graph 1 shows the rainfall figures as well as the yields of the no-till and conventional systems on the demonstration trials for the 2001/2002 to 2006/2007 production seasons.

It shows that there was no fixed pattern in yield differences between the systems. In 2003/2004 and 2005/2006 better yields were obtained with the conventional system, but in the other seasons, the no-till system performed similarly or better than the conventional system. Considering the average yield, the no-till system has performed better over time. 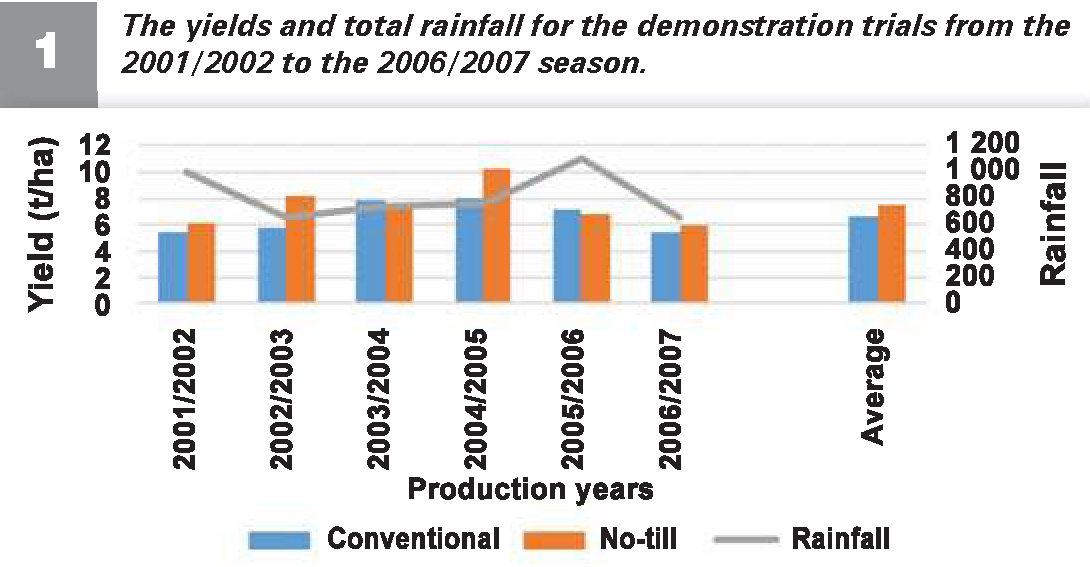 The profitability of the two systems is shown in Graph 2. The gross production value, directly attributable variable costs, as well as the gross margins, which form the basis of profitability, are hereby indicated. 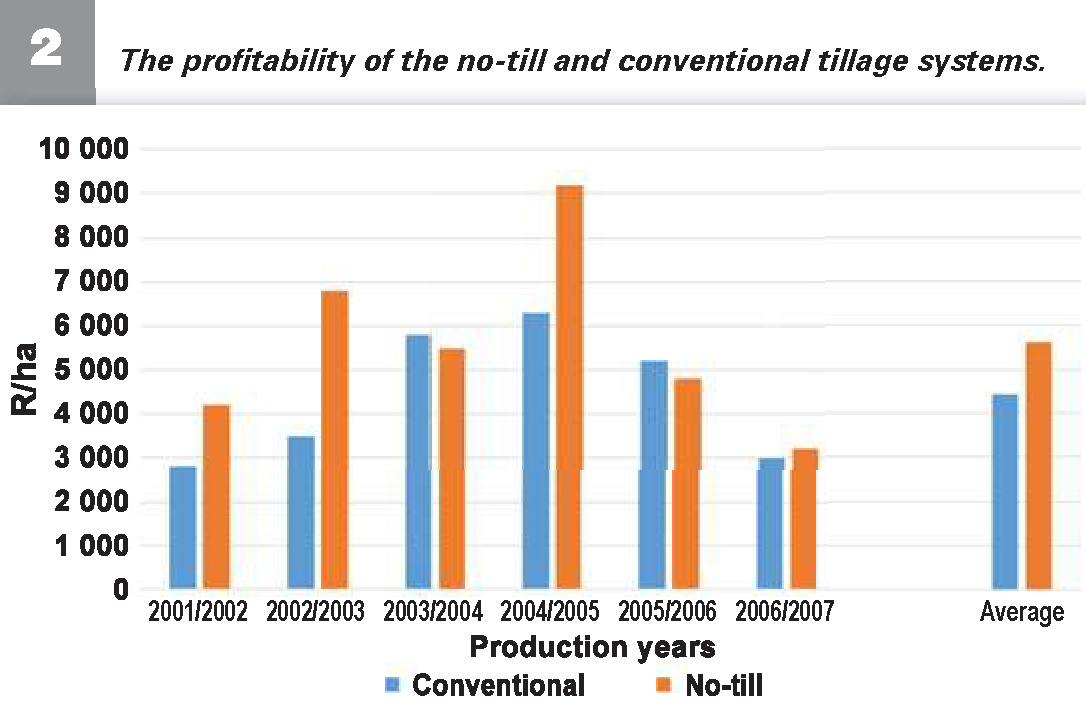 CONCLUSION
This information indicates that although no major short-term savings on input costs can be expected when switching from a conventional to a no-till system, it can increase the profitability of maize production.

In these figures the fixed cost is not included. As less machinery is needed with a no-till system, the depreciation is dramatically less than the conventional system.

With each system there will be problems. With a no-till system farmers must remember that their management skills must be better. Mistakes can’t be corrected with implements and timing is of utmost important. If you spray herbicide too late, you will pay the price.

Before entering a no-till system, make sure you understand it and can manage it.