Mycotoxins, toxic chemical compounds produced by moulds, can contaminate commodities­ either in the field or during storage and are invisible, odourless and tasteless. The only proven way to determine whether grain, feed or food are contaminated, is by analytical testing.

According to the Food and Agriculture Organization, food losses due to mycotoxin contamination are estimated at 25% on a global scale and pose a real threat to food security, especially in Africa where the magnitude of losses is difficult to estimate because of a lack of information.

Mycotoxin production is foremost a food safety issue, although the occurrence of moulds can also lead to damage ranging from rancidity, odour, flavour changes, loss of nutrients and germ layer destruction resulting in a reduction in quality. Most mycotoxins are toxic in very low concentrations, so this requires sensitive and reliable methods for their detection.

Effective management to prevent food losses or adverse health effects as a result of long-term exposure to contaminated food is only possible when adequate reliable testing data is available. Well-timed interventions in the food and feed value chain can then be based on these testing results.

The multi-mycotoxin assessments included in the annual maize crop quality survey for the past seven seasons provide the most comprehensive overview of the multi-mycotoxin risk in commercial maize produced in South Africa. Approximately 35% of the maize crop samples were selected every season for multi-mycotoxin analyses to proportionally represent all the production regions, as well as both white and yellow maize.

The mycotoxins regulated in South Africa are Aflatoxin B1 and Aflatoxin total, Fumonisins (FUM) B1 + B2 and Deoxynivalenol (DON). These mycotoxins, as well as nine other mycotoxins of most concern globally, are included in the LC-MS/MS analysis used by the Southern African Grain Laboratory (SAGL).

The absence of Aflatoxin B1, B2, G1, G2, Ochratoxin A, T2-toxin and HT-2 toxin in the commercial maize samples over the past six seasons were confirmed in the 2016/2017 season. The fact that Aflatoxin B1, a mycotoxin classified as a cancer-causing hazard, does not occur in commercial maize produced in South Africa (except for three white maize samples in the 2014/2015 production season), is a huge food and feed safety advantage for the maize producers in South Africa.

The different trends observed on the mean concentrations of Fumonisins, Deoxynivalenol and Zearalenone over the past seven seasons in the different regions, confirmed again the well-known fact that the mycotoxin risk in maize produced, differ from season to season in the same region and also from region to region. This can be ascribed to the fact that the occurrence and concentration levels of mycotoxins are related to environmental factors as well as seasonal climatic conditions during the pre-harvest production period. 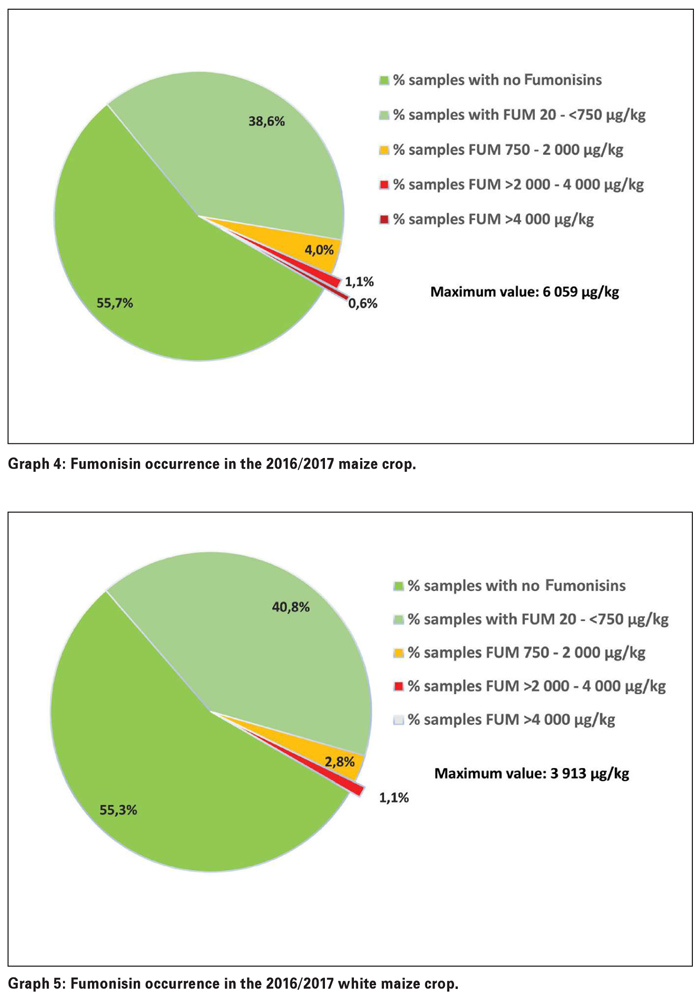 Due to the record local crop no maize where imported during the period May 2017 to April 2018.

Grading
1 000 composite maize crop samples, representing individual silo bins and bunkers, were received this season. The maize crop was of very good quality, with 85% of white and 92% of yellow maize, graded as maize grade one, compared to the 72% and 78% of the 2015/2016 season. The percentage total defective kernels above and below the 6,35 mm sieve, 4,7% for white and 4,4% for yellow maize, was 1,5% and 1,3% respectively lower than the previous season.

The percentages Diplodia as well as Fusarium infected kernels on both white and yellow maize were between 0,2% and 0,4% lower than in the previous season.

Milling Index
Milling Index is an indication of the milling abilities and milling quality of maize kernels, where a higher Milling Index means a higher extraction of the high-grade and most profitable products like samp, maize rice and maize grits (degermed products) that are manufactured from the corneous part of the endosperm.

The Milling Index is a model developed on the Foss NIT Infratec 1241- Generation 3 Standard Version Grain Analyser where the NIT spectra were modelled against the Roff milling fractions. In the previous seasons (until 2015/2016) the Milling Index of the samples were determined with the calibration model developed by the ARC-Grain Crops. With this model, the average Milling Index of a sample with good milling characteristics is about 95 with a variation of about 55 (low milling quality) to about 115 (very good milling quality).

The SAGL was tasked by the Maize Trust to develop a new model for Milling Index using samples from maize cultivar trials supplied by the ARC-Grain Crops and by commercial seed breeders over four seasons (from 2012/2013 onward). The trials included a range of hardness levels. The New Milling Index (NMI) that was developed is similar to the original ARC formula but on a 14% moisture basis, and with the constants removed. The NMI model has improved precision compared to the older version, due to the almost tenfold increase in the number of samples used to build the calibration model.

During the fifth year, samples of commercial hybrids, selected imported maize samples and outlier samples from the 2014/2015 and 2015/2016 seasons were included to develop a robust model with the assistance of FOSS to produce accurate results. The improved new model, SAGL Milling Index 2017, now includes two parameters, SAGL Milling Index (SAGL MI) as well as a new parameter namely Grit Yield All (GYA).

SAGL Milling Index indicates the relative ratio of total hard endosperm products (B2 grits, B3 fine grits and B3 coarse grits) to offal products (B1 fine flour and total chop/bran) as determined on a Roff mill and used for calibration of the NIT. It is expressed as a dimensionless index value according to the scale in Table 1. 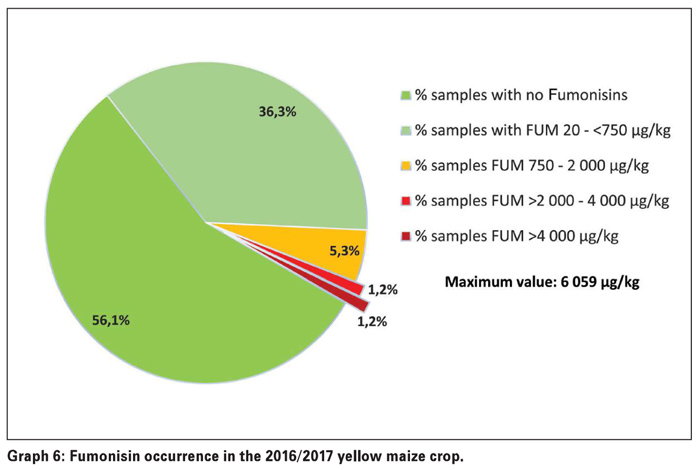 Roff milling and whiteness index
The average percentage  extraction of total meal in white maize obtained with the Roff mill averaged 78,6% (0,2% higher than the previous season) and varied from 69,7% to 81,7%.

The higher the whiteness index (WI) value obtained, the whiter the meal sample. The sample with the lowest sifted whiteness index value of -17,5 this season, also had the highest percentage other colour maize namely 7%.

Starch content of white maize (74,1%) was on average 1,5% higher than in the previous season and yellow maize (73,7%) 1,4% higher. Both are also higher than the ten-year averages. The fat, starch and protein nutritional components are reported as percentage (g/100 g) on a dry base.

Visit our website (www.sagl.co.za) for detailed results of this, as well as previous surveys. The reports are also available for download in a PDF format.