Maize mycotoxin research at the ARC-GCI

Mycotoxins are highly stable compounds produced by fungi and they contaminate food crops both before and after harvest. Therefore, it is impossible to eliminate mycotoxins from food and feed in spite of the regulatory efforts at national and international levels to remove contaminated commodities.

However, agricultural practices such as grain sorting, control of stem borers and cereallegume crop rotations can be applied to reduce mycotoxin contamination. Aflatoxins, fumonisins, zearalenone and trichothecenes (deoxynivalenol and nivalenol) are mycotoxins that contaminate maize and are harmful to both humans and animals.

Fumonisins are produced by Fusarium verticillioides in maize grain worldwide and they are present at low levels in most field-grown maize, but may spike to high levels depending on both the environment and genetics of the host plant. Thus, they are a major concern in subsistence agricultural systems and in population segments where maize is a staple food.

Importance of the maize industry in South Africa

Maize is an important crop in South Africa, it is a dietary staple, a source of livestock feed, and an export crop. According to the Crop Estimates Committee, about 11 million tonnes of maize were produced in the 2010/2011 season.

The production of maize generates at least 150 000 jobs in years with good rainfall and consumes almost one half of the inputs of the modern agricultural sector. Maize grain is an important input in most food production in South Africa, a shortage in maize certainly leads to an increase in food prices and inflation.

Fusarium verticillioides, F. proliferatum and F. subglutinans causes Fusarium ear rot (Photo 1) in maize. Yield and poor grain quality losses are attributed to these Fusarium species. Fusarium verticillioides is economically the most important pathogen of maize and is associated with maize in all maize producing regions of South Africa. Fusarium graminearum produce zearalenone and trichothecene mycotoxins in maize, while Fusarium subglutinans produces moniliformin. 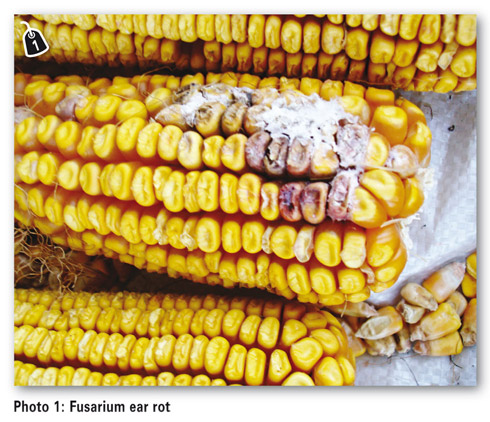 Market restrictions, non-marketabe products and post-harvest costs are some of the economic losses associated with mycotoxin contamination. Loss of animal productivity as a result of mycotoxin-contaminated feed also lead to economic losses.

Distribution of mycotoxins in subsistence agriculture in South Africa

A survey was done to determine the levels of fumonisins (Figure 1) and aflatoxins (Figure 2) in maize produced by subsistence farmers. Regulatory agencies such as the European Commission have formulated guidelines for the maximum level of mycotoxins in food and feed. For example, the maximum level for fumonisins in human food is 2 parts per million and for aflatoxins it is 2 parts per billion.

Most areas in Northern KwaZulu-Natal had high fumonisins (>2 ppm) and aflatoxins levels (>20 ppb) and programmes to reduce contamination levels, need to be implemented is such areas. 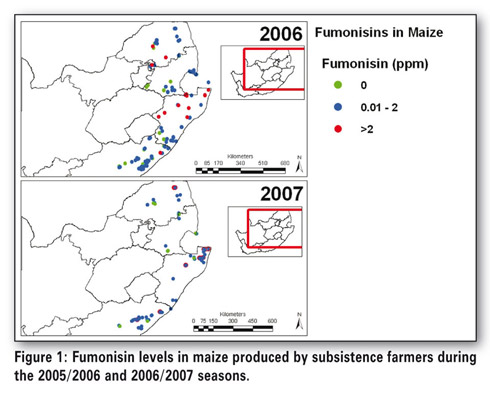 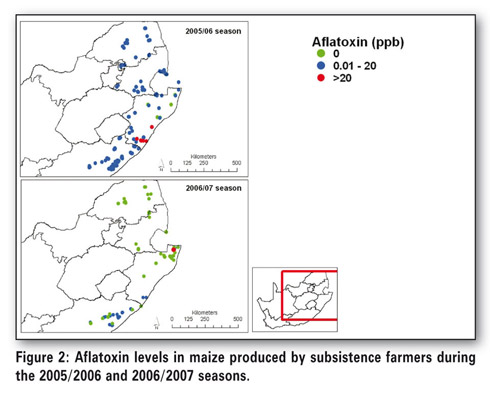 Resistance
Prof Flett and Prof Altus Viljoen of the University of Stellenbosch (US) are collaborating on conventional and unconventional breeding to control fumonisin contamination in maize. Ncube is collaborating with the North-West University (NWU) and the US on the interactive effect of F. verticillioides and the African stem borer on Fusarium ear rot and fumonisin production in both Bt and non Bt-maize.

Environmental effects
Janse van Rensburg in collaboration with the University of the Free State (UFS), NWU, the US and the Medical Research Council (MRC) is investigating the effect of maize plant stressors such as nitrogen levels, drought, plant density and heat on F. verticillioides infection and fumonisin production. She is also involved in research on modelling the incidence of Fusarium verticillioides and Aspergillus species and their mycotoxins in maize.

Prof Flett is collaborating with the ARC-Plant Protection Research Institute (PPRI), UFS and US on building towards understanding the mechanisms of pre-harvest mycotoxin production by F. graminearum in maize, and its distribution in order to develop an epidemiological model for monitoring and managing the production of zearalenone and trichothecene mycotoxins in maize under South African conditions.