This represents 34% of cereal production and is 8% of the value of all crops in the region. Maize is critical for food security in sub- Saharan Africa – eastern and southern Africa use 85% of the maize produced as food, while Africa as a whole use 95% as food.

Maize production in South Africa is largely rain dependent as 60% of maize is cultivated on dry land while only 20% is irrigated. Maize is planted in seven of the nine provinces of South Africa and includes the Free State, Mpumalanga, North West Province, Gauteng, KwaZulu-Natal, Limpopo and the Northern Cape provinces on a total area of 2,78 million ha. A total of 11,72 million tons of maize in the 2012/2013 season were produced that increased to a total of 13,029 million tons of maize from 2,68 million ha in the 2013/2014 season.

A serious disease outbreak in Kenya, later diagnosed as maize lethal necrosis, was first reported in September 2011 in the Longisa division of the Bomet district. By 2012, symptoms consistent with maize lethal necrosis were observed in a number of districts in the Central, Nyanza, Western and Rift Valley provinces of Kenya.

Since then, the disease has been reported by Rwanda and Democratic Republic of Congo. Similar symptoms on maize have been reported by Uganda and Tanzania, and more recently by South Sudan and Ethiopia. Recent discussions with pathologists in Tanzania have raised suspicions that the disease may already be in Tanzania in the Mtwarao region which borders on northern Mozambique.

Maize lethal necrosis has previously been reported in Peru, United States of America, Argentina, Mexico, Thailand, Brazil and China. Crop losses of up to 100% have been reported. The potential avenues of reaching South Africa are from Tanzania into Mozambique and into the sub-tropical areas of South Africa where subsistence maize is often grown continuously throughout the year. 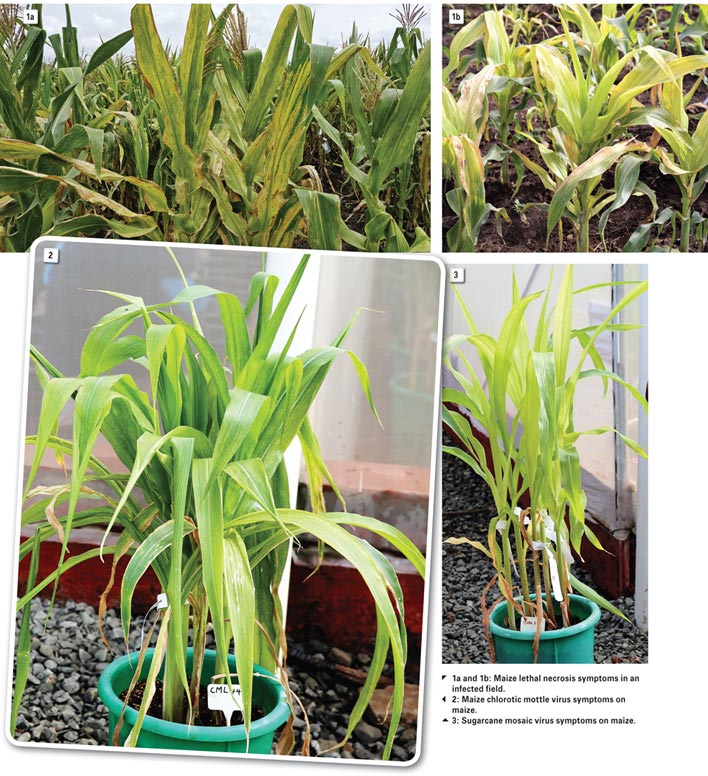 Sugarcane is often grown in close proximity to maize fields both commercially and by subsistence farmers. It is highly possible that maize grown in these areas may be infected with sugarcane mosaic virus. It is critical that a full survey on maize viruses be conducted throughout the South African maize industry to determine what viruses do occur in South Africa.

Maize dwarf mosaic virus and maize streak virus have been reported on maize in South Africa. The results of the survey will allow an objective assessment as to the potential risk we have of maize lethal necrosis becoming an epidemic in South Africa.

Maize streak virus is common throughout Africa and is restricted to sub-Saharan Africa where it has been known to result in major yield losses. The possible synergistic action of maize chlorotic mottle virus and maize streak virus has to date not been examined.

In a presentation in Naivasha in Kenya Dr Anne Wangai highlighted that the possible synergistic action of maize chlorotic mottle virus and other viruses outside the Potyviridae needs to be determined.

The experimental host range where maize lethal necrosis disease is concerned, is restricted to the grass (Poaceae) family with maize being the primary and natural host. A number of natural and planted grass species have been infected with either or both viruses using mechanical inoculations and include: Bromus spp., Digitaria sanguinalis, Eragrostis trichodes, Hordeum spp., Panicum spp., Setaria spp., Sorghum spp. and Triticum aestivum.

Research on potential alternate host plants is ongoing in Kenya and the list of hosts is increasing. Locally we need to determine which of these alternate hosts grow naturally or are grown as crops in South Africa and where.

This will enable us to determine the extent of a potential inoculum reservoir for the different viruses involved in the possibility of a maize lethal necrosis outbreak in South Africa. This will require a survey of grasses in high risk areas and screening of the grasses for any of the previously reported maize viruses.

Transmission is largely mechanical, by insect vectors and/or seedborne. Mechanical transmission is illustrated by the ease at which plants can be inoculated using a blower to blow a fine mist virus suspension onto plants to screen them for maize lethal necrosis.

Mechanical transmission will also include movement of people, animals and implements through infected fields. Vector transmission of the primary viruses has been studied to a point but more research on the interactions between the vector, virus and host is required to determine latent periods for feeding to carry over the various viruses that are involved in this complex.

More recent studies, however, have shown that seed from infected maize plants may have a seed transmission rate of up to 100%, hence the urgent implementation of phytosanitary regulations by the Department of Agriculture, Forestry and Fisheries (DAFF) to reduce the risk of importing contaminated seed into South Africa.

Currently these phytosanitary regulations are critical to reduce the risk of this disease (primarily maize chlorotic mottle virus) from entering South Africa. The quick, long distance spread of the disease from Kenya to other east African countries has been attributed to the movement of contaminated seed from maize lethal necrosis infected areas.

Maize chlorotic mottle virus has also been reported to be transmitted through soil and infected leaf debris since the virus is able to survive in plant residues. The planting of continuous maize in a field greatly increases the incidences of both viruses and vectors.

Different types of resistance have been described which include antibiosis, non-preference, escape and mechanical barriers. The possible vectors have been discussed above and research on identifying other potential vectors should continue.

The interactions between the suspected vectors, the various viruses involved in the disease complex and various alternate hosts as well as maize need to be studied intensively to improve our understanding of priority vectors and alternate hosts, the mode of virus transmission and feeding period required by each vector on a maize plant to successfully transmit the viruses.

Various methods are available for detection of plant viruses which include visual symptomology, use of indicator plants, electron microscopy, serological methods (most commonly used in Africa) and molecular techniques (these being most expensive, but also most accurate).

Surveying in SADC – diversity and diagnostics

The disease is most likely to reach South Africa through two possible routes. Once it spreads to southern Tanzania, the disease is expected to spread to South Africa via Mozambique and/or eventually through Zimbabwe.

Both ARC and IIAM (Mozambique) need to be proactive and develop multi-stress resistant and tolerant maize inbred lines and hybrids with resistance/tolerance to maize lethal necrosis.

To date more than 1 000 ARC hybrids have been screened by the International Maize and Wheat Improvement Centre (CIMMYT) at Naivasha and they have all been found to be highly susceptible to maize lethal necrosis. Maize lethal necrosis resistance breeding is therefore essential.

CIMMYT has identified a number of sources of tolerance but these still need to be tested over various climatic zones for adaptation to local production areas before being included into local breeding programmes.

In most of these areas, smallholder farmers grow both maize and sugarcane, and they are therefore potential hot spots for sugarcane mosaic virus (presently) and/or maize chlorotic mottle virus (in future) which cause maize lethal necrosis.

Epidemiology involves the holistic understanding of all interactions included in the disease cycle of maize lethal necrosis. This includes understanding all possible interactions between the viruses, vectors and other modes of transmission, hosts and environmental factors influencing the entire disease.

There is still a lot of confirmatory work to be done, surveys and basic agronomical research on this disease and/or its potential to infect maize in South Africa. Once all this information has been obtained, we shall be able to understand the maize lethal necrosis epidemic and identify points where integrated control measures can be implemented.

This information will be used in a systems analysis and once we understand the dynamics of the entire disease, we shall confidently be able to assess the potential risk this disease will have to maize production in South Africa and how we and neighbouring countries can successfully manage the disease to reduce its impact.

To date the most significant control measure is to prevent maize chlorotic mottle virus coming into South Africa, which is why the phytosanitary regulations have been put in place by DAFF. Continued breeding efforts are critical to reduce the potential impact of maize lethal necrosis.

Agronomic practices which may slow down the epidemic need to be determined and packaged together with resistance into an integrated disease management system.