Tillage influences both the physical and chemical properties of the soil and increase inoculum pressure of these fungi, therefore a reduction in tillage practices may significantly influence maize ear rot fungi, but this is entirely dependent on the individual fungi’s life cycle and survival mechanisms. Crop rotations have also been identified as a viable method for disease control in no-till systems.

These cropping systems have not been sufficiently evaluated in South Africa and therefore the effect of cropping systems and the role of crop rotations on maize ear rots and mycotoxins were investigated in Buffelsvallei (North West Province) and Erfdeel (Free State) over a six-year (2009/2010 - 2014/2015) and four-year (2011/2012 - 2014/2015) period, respectively.

It is important to note that the fungal amount of Gibberella (ranging from 2,62 ng/µL - 59,07 ng/µL) quantified from maize grain could have had reduced grain quality and yield in the 2010/2011 season and on the other hand, the Diplodia ear rot incidence (ranging from 0,29% - 2,11%) was relatively low and would not have led to yield loss and a reduction in grain quality in the 2013/2014 season.

Fumonisin accumulation was higher in the two-year sunflower rotation and deoxynivalenol accumulation was higher in maize grain from monoculture conventionally tilled maize. Although the data were statistically significant, only the maize/sunflower rotation had a fumonisin level (8,87 mg/kg) above the allowable legal limit for human consumption (4 mg/kg) in the 2011/2012 season.

Trace amounts of deoxynivalenol levels pose no health threats when this maize is consumed by humans or animals. 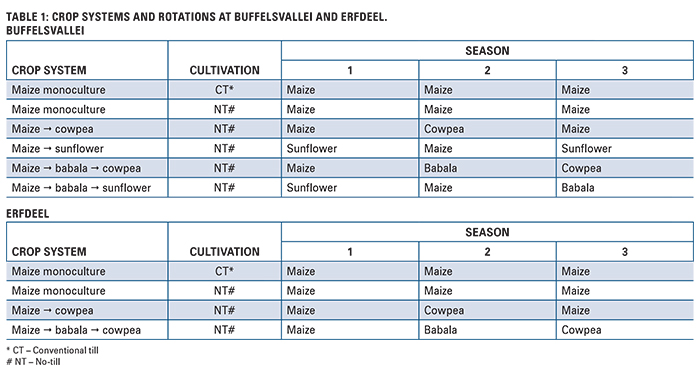 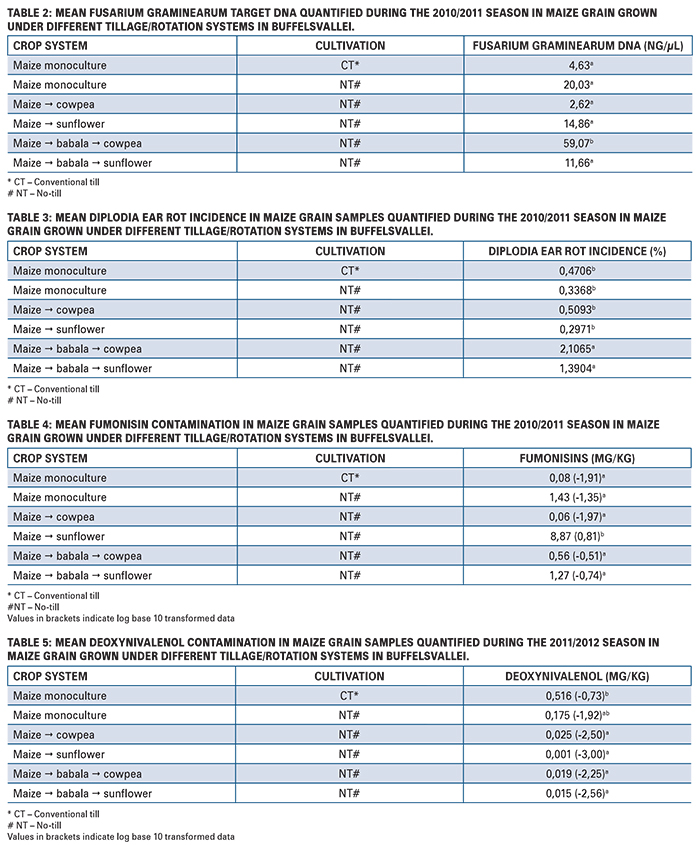 Erfdeel
Cropping systems had no significant effects on fungal infection or mycotoxin accumulation in maize grain obtained from trials conducted at Erfdeel.

Conclusions of this study
It appears that the season had a greater effect on Gibberella ear rot infection, Diplodia ear rot incidence, fumonisin and deoxynivalenol accumulation compared to cropping systems. Although statistical analyses showed that the cropping system had a significant impact on Diplodia ear rot, fumonisins and deoxynivalenol, the units of measurements (except for the fumonisin level of 8,87 mg/kg in the maize -> sunflower rotation) were low and therefore these fungi and mycotoxins were not a threat to the production of high yielding safe maize.

The results of this study indicate that conservation agriculture systems under the environments evaluated, did not increase the risk of maize ear rots and mycotoxin production.