Lentils – a possible alternative food crop of the future

Lentils (Lens Culinaris) are an annual pulse crop traditionally grown in West Asia, East and North Africa, the Indian Sub-continent and in the recent past in North America and Oceania. It is an important crop in food, feed and farming systems in various countries.

Lentils, among other food legumes, play a significant role in human and animal nutrition and in soil health improvement. Its cultivation enriches the soil nutrient status by adding nitrogen, carbon and organic matter, which promotes sustainable cereal-based crop production systems in the regions. It has an ability to withstand drought and poor soils. It is the most desired legume because of its high protein content of up to 35,5% and fast cooking characteristics. It is used as a starter, main dish, side dish or in salads.

Additionally, it may be deep-fried and eaten as snack, or combined with cereal flour in the preparation of foods like bread and cake. Lentils are a key source of protein, especially for the poor, who often cannot afford animal products. It is rich in starch, protein, calcium, manganese, crude fibre, fat, trace elements and minerals, which makes the crop an ideal supplement for traditional cereals or tuber-based diets, which are generally protein deficient.

Lentils are among the pulses that can be used to diversify the legume base of South Africa because it has the potential to be grown in various provinces of South Africa, as it can tolerate extreme environmental conditions This means provinces like Limpopo, North West, Mpumalanga, KwaZulu-Natal and Free State which are characterised by low rainfall and hot temperatures, as well as droughty conditions can be ideal. Lentils prefers any soil type with good drainage. Some varieties can be grown in cold areas which can ensure a continuous supply of lentils in and out of the season. Additionally, lentils can be grown in rotation with cereals to improve the soil structure and fertility. Hence, the production of this crop can benefit the South African farmers.

Lentils are similar to beans (soybeans/common beans). They grow in pods that contain either one or two lentil seeds that are round, oval or heart-shaped disks. They may be sold whole or split, with the brown and green varieties being the best at retaining their shape after cooking (Table 1). Various lentil varieties are used worldwide including brown, red, green, Lentilles Du Puy, French green lentils and black lentils amongst others. Their major attributes and cooking times are shown in Table 1. 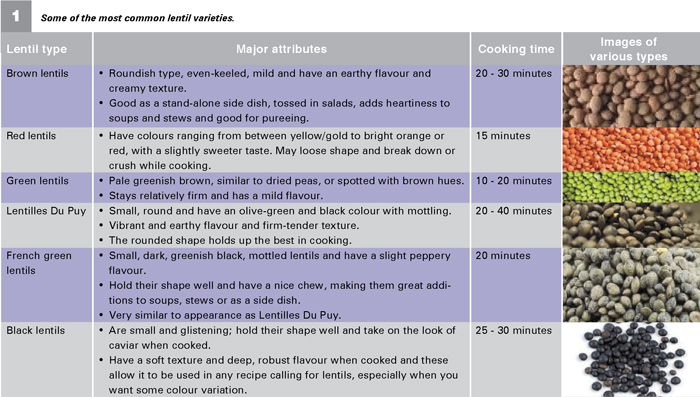