Leaf diseases on maize: what does this season hold?

Disease can only occur when the host, pathogen and suitable environmental conditions overlap. Given the newest long-term weather forecasts producers can expect some diseases and they must be on the lookout for diseases.

THE SEASON AHEAD
Climate is the overriding aspect in the prediction of the pests and plagues. The incidence of pests and plagues is completely dependent on the environmental conditions during the critical growth stages of the crop. According to the 30 September 2021 long term weather forecasts of the South African Weather Service, the El Niño-Southern Oscillation (ENSO) is likely to remain in a neutral state for spring, with a likely change to a weak La Niña during early- and mid-summer. As we move towards the mid-summer season, ENSO starts playing an important role in our summer rainfall. As such, the increased likelihood of a weak La Niña during early- and mid-summer is expected to be favourable for above-normal rainfall in that period.

The multi-model rainfall forecast indicates mostly above-normal­ rainfall for the north-eastern half of the country throughout the early-summer (October to December and November to January) and mid-summer (December January February) seasons. Above-normal minimum and maximum temperatures are expected across the country throughout the early-summer and mid-summer seasons except for parts of the north-east of South Africa which are expected to have below-normal maximum temperatures during mid-summer.

CLIMATE AND LEAF DISEASES ON MAIZE
Maize diseases develop over time. Climatic will determine when the infection occurs, how fast the disease establishes, and what the damage will be in the end. There are no new leaf diseases in South Africa that can surprise the producer. They are often the direct consequence of climate conditions changing. It is therefore important for producers to recognise the well-known leaf diseases on maize, and also to know when one can expect to see them.

Only the correct diagnosis of a disease can determine if the control strategy will be successful. One of the most common mistakes producers still make is to administer fungicides for diseases caused by viruses, bacteria or even physical damage (sunburn or wind damage).

Sometimes grey leaf spot, bacterial streak and sunburn damage are confused. Management of these problems is very different, and in some cases not even possible. A good local reference resource will help the producer to recognise diseases and to then make the correct management decisions.

Before they occur, the most important maize leaf diseases have unique needs in terms of environmental conditions. Furthermore, the physiological growth stage of the plant determines when certain diseases appear.

The most important maize leaf diseases for which the producer should be on the lookout are summarised in Table 1. 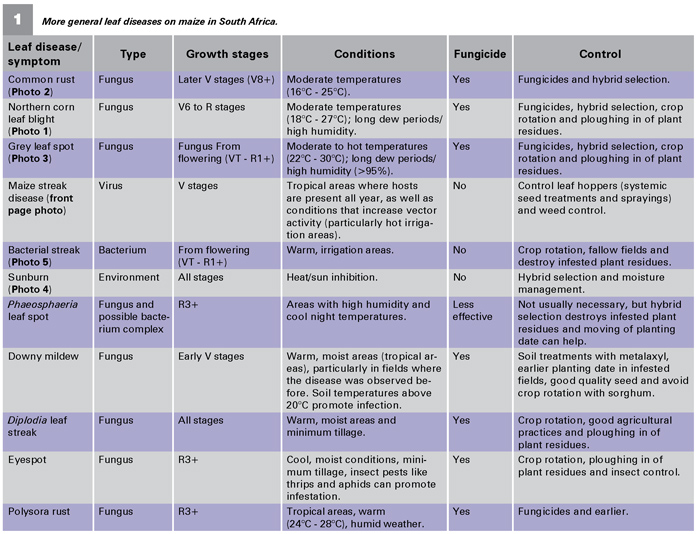 There are various other leaf diseases that were not mentioned in this article because they are less common or occur sporadically. However, this does not mean that they cannot cause huge yield
losses under the right conditions. In order to react timeously, it is wise to still consult a good source or expert if suspicious symptoms are observed. 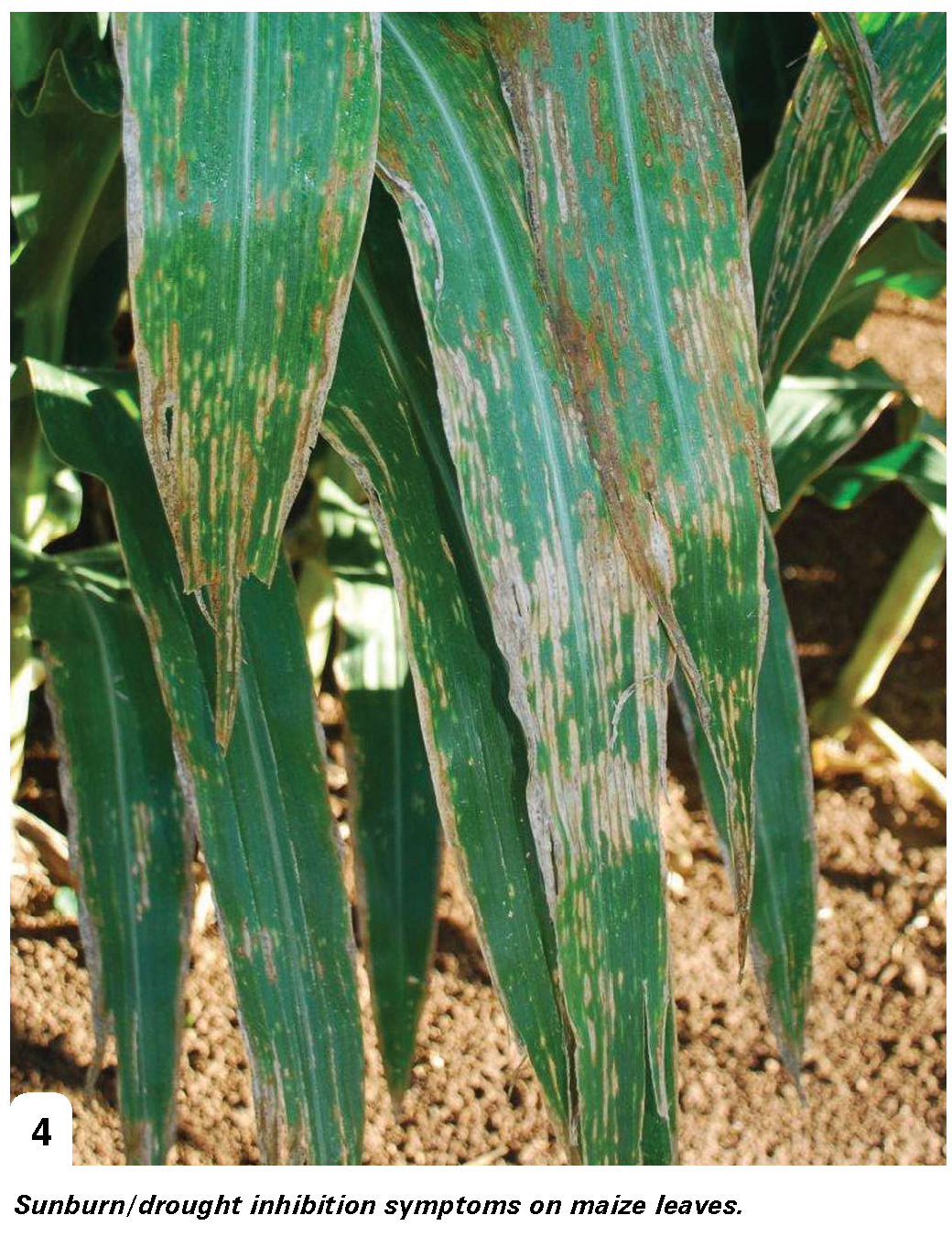 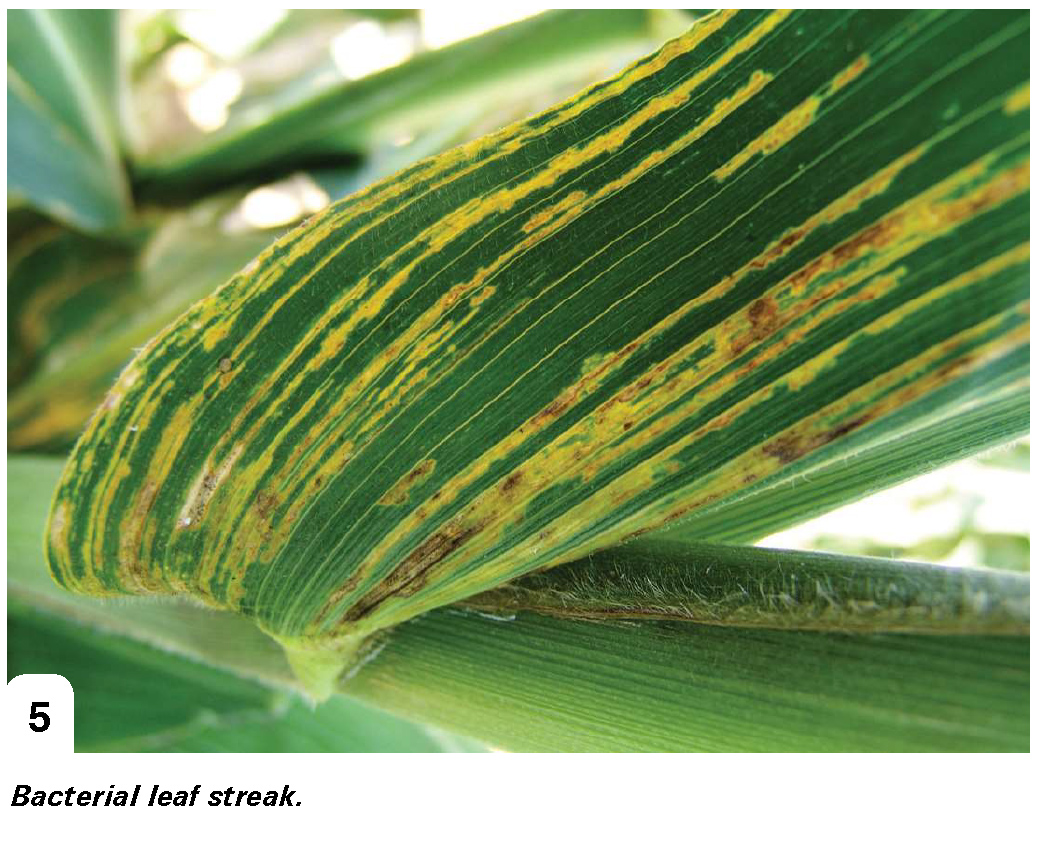