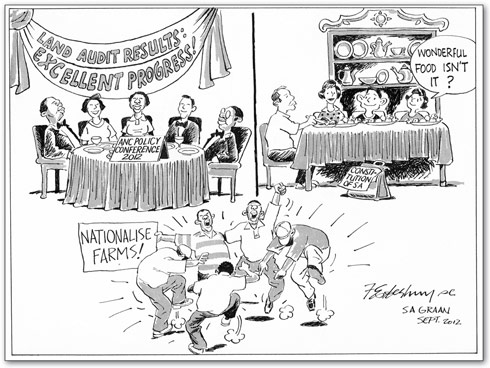 The outcome of the policy conference of the ANC definitely holds a number of lessons for producers. I had the opportunity one evening to have dinner with the delegates, not only to get a feeling for the event, but also to have a number of meaningful discussions with some of the delegates.

To be able to sit next to a few of the highly placed officials and ministers for three hours and be able talk to them without any serious interruptions was definitely worth it. I think Agri SA who arranged it, deserves a feather in the cap!

I wish to start from the bottom end: At the end of the evening; following a long discussion, I asked the people around the table: “What, given everything that we have discussed, is there that we as grain producers can do for the government?”

Frankly, without mincing words or taking time to think about it, Dr Cassius Lubisi, director general in the office of president Zuma, said: “To provide us with food security” – enough food! In our discussion earlier it seemed as if he was not well-informed about agriculture, but if he understood the concept of food security correctly, I then also understood the outcome of the policy conference a whole lot better.

I do not wish to suggest that the whole debate about land reform is in any way over or settled, far from it, but what I do know is that the governing party fully understands and appreciates the importance of food security as a priority and that acts as a counter balance to the alternative of just implementing the Zim style land reform.

The message was clear; not just for producers and property owners, but also for some of the loud factions of the governing party shouting in favour of nationalisation. The Constitution is not going to be amended and Section 25 of the Constitution of the country remains in place. To retain agricultural land in production requires a policy framework that is balanced. This means that land values and ownership will be honoured within the ambit of the Constitution.

It must be clearly understood that the Constitution also provides for land appropriation, but then it may only take place within the framework of the law. Lastly there is still the right of the individual for him or her to turn to the Courts to protect his/her rights.

I also wish to compliment Professor Johann Kirsten who took on one of the holy cows during the conference. The outstanding land audit that should indicate where we stand with land reform prevents agriculture to prove where the sector stands with regard to transformation.

Someone had to be brave enough to say something about this subject; Well-done Professor! Thank you to the agricultural unions which by their own initiative and costs tackled the matter of the outstanding land audit in the vacuum of a land audit by the state. Now we are only waiting for the government to finalise the land audit so that we can confirm our suspicions in this regard.

Lastly, I would also like to address the lessons to learn from the process. As a sector we have most likely lent our ears too often to the radicals in the governing party who advocate nationalisation. Should we not rather identify with the voices of reason and listen carefully to them (rather than the hooligans)?

Secondly, good results do not come without hard work. Studying documents, writing commentary, circulating, debating and to have the capacity and tact to, at the right moment, say the correct things to make a difference.

Thirdly, the disposition to find solutions and to not just criticise. And finally, to also believe that everything will work out well in the end and to not just start complaining the moment the wind turns west.

Producers, there is a voice of reason within the governing party and they are still in control. There is a counter balance with the name “food security” that, in conjunction with the Constitution of the country, offers us the protection of that which is important to us. Come; let us remain focused on what we can do well, which is to produce food from the land for our country and its people.