A detailed yield estimation method has been described in previous Pula Imvula articles. This method was tested on some lands planted in the 2019/2020 production season to compare the pre-harvesting estimate to the final yield harvested. What became evident is the huge diversity of cob sizes, number of rows per cob and kernel weights or mass within a single cultivar in a land or block planted in the same period.

It is a useful exercise to pick cobs from several individual plants before harvesting. They can be examined and measured for cob length, number or rows, length of full seeded area while taking note of any non- pollinated or undeveloped seed areas at the cob tips.

The information or data can be used to evaluate any short comings in the actual yield harvested to the planned target and the effectiveness of the fertilisation programme. Any deficiencies noted can be used to improve these production factors in the next crop.

An example of a test carried out can be seen in Table 1. Please note the diversity of cob sizes found. The test was done when the maize cobs were very moist and measured at harvesting. Estimated conservative yield at that time was 6,17 t/ha hectare. Indications are with a portion harvested that the final yield will be 6,4 t/ha. It shows that the method was quite accurate and was on the conservative side. Two rows of kernels from each cob were removed, counted and weighed. The number of rows per cob found were 12, 14, 16 and 18 in one cultivar. 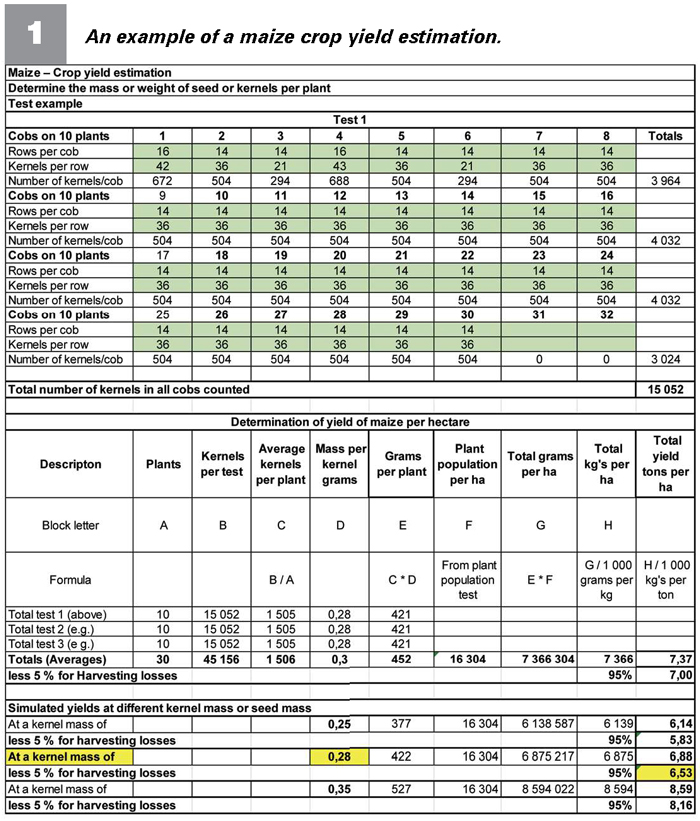 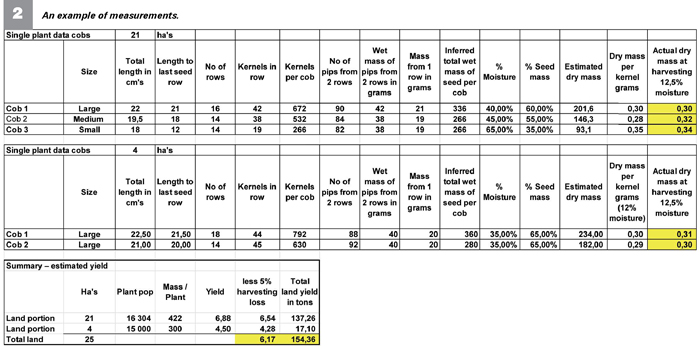 CULTIVARS
Yield is determined by kernel/pip numbers and kernel weight or mass. This will be further influenced by plants per hectare, cobs per plant and kernels per cob. There is a large choice of cultivars available to farmers for each production region ranging from single stem single cob types to multi-stem and multi-cob types. Some types are suitable for silage as well as seed production.

The potential number of kernels and kernels in a row is determined between the V6 and V8 growth stages. The V6 and V8 stages describes the 6 and 8 leaf stages of growth after planting. These stages can occur, depending on a hybrid maize cultivars’ genetic makeup, between 23 to 32 days after germination. The maximum number of ovules are formed after the initial ovules divide into two rows. The potential of the cob which can be up to 1 000 ovules per ear is set a week before the silks emerge at about 70 days of age. The silks emerge from each ovule and having received pollen, are fertilised, and start developing into kernels. The potential number of kernels formed is thus highly dependent on the growing conditions and available nutrients before the start of silking, while the actual kernels reaching full size and mass are determined by conditions during and after silking.

The cobs described below came from a multi stemmed and multi cob type also suitable for silage production. As was noted during the season at the early to medium kernel reproductive development stages at R2 to R3 some plants had up to seven potential cobs on three stems which weaned off to 2 or 3 cobs at harvesting. In wet seasons the additional cobs might be ideal. Please refer to the many charts available of the maize growth stages from seed suppliers.

Farmers must consider that all this vegetative growth with increased moisture transpiration and nutrient demands in a dry year might result in a stressed crop with below targeted yields. These factors should be critically discussed with your seed supplier in deciding which cultivar type is best for your farm. It is best to plant several varieties to compare to a well-known ‘benchmark’ staple that has done well on your farm over a number or seasons. Becoming part of a trial test programme for new cultivars is also advisable. 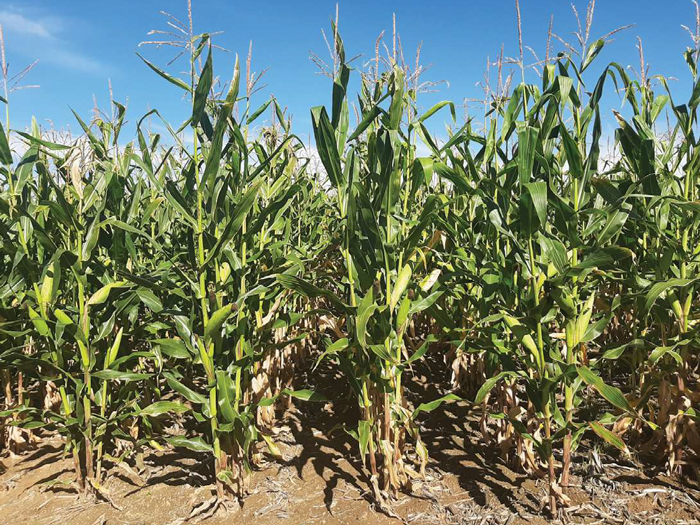 The same cultivar as tested showing the maize and cobs, some just after silking and pollination others at the soft dough stage illustrating the large number of cobs on the plants.

The same land having a theoretical potential of over 8,5 t/ha with the fully formed cobs which become about 6 t/ha at harvesting. 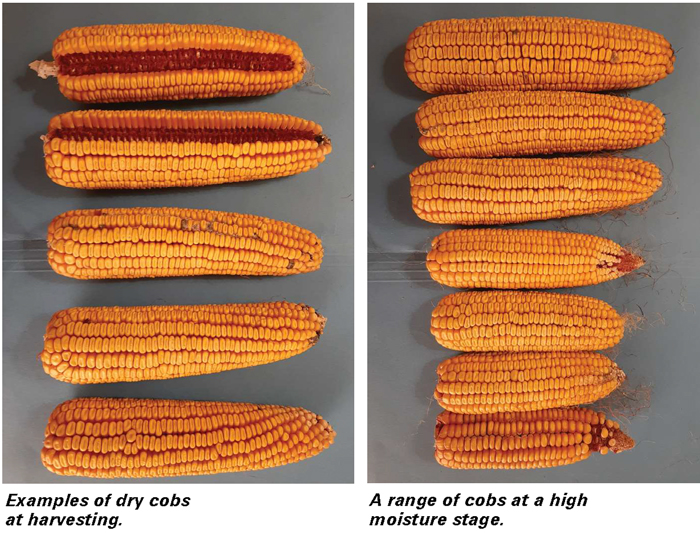 FERTILISATION MANAGEMENT
Much research has indicated that any shortage of mainly nitrogen in the above-mentioned critical phases of kernel development will have the most effect on growth and final yield. Weed control when the plants are between the first to the 5-leaf stage (V5) up to 21 days after germination is important.

It is most important and critical to side dress any nitrogen requirements that were not applied before or at planting between stages V5 to V8 to ensure that the nutrients are available in the soil for the maximum number of kernels to form. As noted in previous articles it is recommended that half the required nitrogen be applied at planting and the other between the V5 to V8 stages. Should conditions prevent side dressing as planned, the nitrogen can be applied up to the 10-leaf stage if your equipment can still be used in the land if the plants are not too high. Maize can grow from being knee high to being over shoulder high in 14 days. Your planning for the side dressing operation must be well in place before any crop is planted.

Any malformed or ears showing a nitrogen, sulphur or potassium shortage from tests above should be used to adjust the future fertilization programme accordingly. Sulphur and nitrogen shortages can be masked, and potassium can show up as short cobs with unformed tip kernels. These signs can be better observed by studying the growing and mature green leaves. A well-balanced fertilisation recipe is always recommended. One is trying to improve kernel numbers and kernel mass in future crops with optimum management.

CONCLUSION
Visit your crop with seed and fertiliser supplier consultants during all phases to see any problems or shortage of nutrients that might develop in reducing your final yield. Be aware of and measure all yield influencing factors during the growth, seed formation and harvesting phases.