It's going to be a tough season

Optimise your profitability and not necessarily your yields. Is that where we now find ourselves with regards to grain production? Agricultural conditions generally are good, although the season is late and, in some areas, has not even started. The Western Cape is experiencing one of its worst droughts ever.

Our visits to the grain production areas of our country have highlighted the large diversity of our climate. From good crops in the east, to scorched early maize in the west to a parched Western Cape – that is what we are confronted with.

The prevailing conditions in the world looks dismal with regards to the recovery of prices in the near future. After the food price crisis in 2008, agricultural technology took off with such a bang that the supply totally overshadowed demand. Stocks have never been so high and prices remain under pressure. When will the demand catch up?

Political optimism is allowing the rand to strengthen and does not lend support with prices. We cannot always live with just the relatively cheaper inputs! The world remains hungry, but our maize prices still exceed export parity – and as a result our silos stay full and our bank accounts empty. In times like these, more than ever, producers must focus on their profitability: Costs and prices.

Grain SA cannot influence the prices, but focuses on keeping the market as transparent as possible and endeavours to ensure that nobody manipulates it. On the cost side we try to publish prices widely so that producers can negotiate and we monitor the quality to ensure that everyone receives what he/she paid for. To optimise profitability, you must have in place the best people knowledge on both sides of your business.

In 2016/2017 I wrote about the new era that was dawning. A type of after-the-free-market-era. I encountered the green shoots thereof around the braai fires during the regional meetings. Producers are busy re-organising themselves into buying and marketing groups and so endeavour to better position themselves.

Some are erecting their own fertiliser plants and have already started processing their own grain products. It is almost as if the first shots in a new era of launching a new type of ‘co-operative movement’ are being fired. It is precisely this type of innovation that makes the South African producers such unique die-hards. Well done guys, let us have your stories with which we can encourage each other in order to remain sustainable. I was also encouraged when some of our new era commercial farmers at the end of their complaints about the poor services of the state, started complaining about the transport differential. Yes, that word! It was clear indication to me that each of them was the same as any other commercial producer.

I wish to close this month’s editorial with an encouraging thought: During all our discussions at regional meetings about land reform it was remarkable to me that the same type of emotional arguments used previously were not used again.

Together with the concerns about the populistic comments, a piece of realism surfaced: That we ourselves will have to devise plans to take this matter forward in a responsible manner. The opinions and recommendations of commercial producers are definitely not weighed in terms of the hectares we own, but (rightfully or wrongfully) in accordance with the percentage votes the opposition parties in Parliament have. It impedes our efforts to influence decisions.

Nevertheless, I am experiencing the development of a greater openness for our views – if we sincerely and together search for solutions and not one-sidedly endeavour to defend or shoot down every argument.

All the best for the season ahead, it is going to be tough. 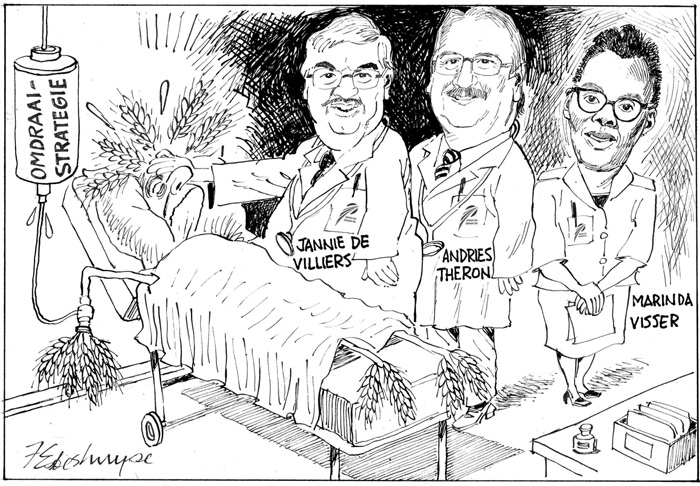