The invasive species of armyworm that has invaded Africa, realised our worst fears when it appeared in South Africa at the beginning of February. The fall armyworm, which is common in the USA, not only attacks grain crops, but is also a well-known pest in groundnuts, cowpeas, cotton, potatoes and soybeans.

It has been reported since 2016 that a new armyworm species has appeared on the African continent. The fall armyworm (Spodoptera frugiperda) (Photo 1), which is a major pest in various crops in the USA, has now been reported for the first time in West and Central Africa, as well as in Zambia, Malawi and Zimbabwe. It also appeared in South Africa at the beginning of February. 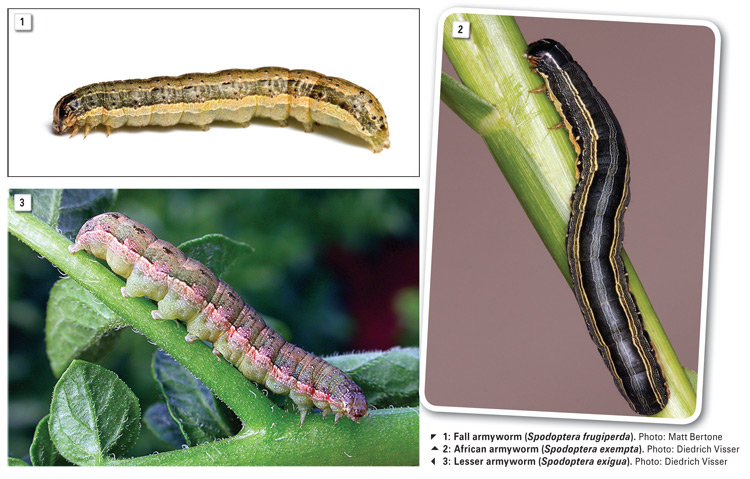 The African armyworm occurs widely in sub-Saharan Africa and is a major pest in countries to the north of South Africa. The unexpected outbreaks of the pest are characteristic of the African armyworm. Large areas of grazing, lawns and grass crops (e.g. maize and sorghum) are seldom attacked by large colonies of larvae.

Small outbreaks occur regularly in high-rainfall areas of Mpumalanga and KwaZulu-Natal, but major outbreaks occur only every five to ten years. The most severe outbreaks in South Africa occur in seasons with late summer rainfall after drought conditions.

The African armyworm’s moth is brown with white hindwings and characteristic darker patterns on the forewings. Moths can migrate across thousands of kilometres, particularly in years with pest outbreaks. The great migration of moth flights start early in the evening and moths can achieve an altitude of between 300 m and 1000m above the ground.

Moths move downwind on air currents, usually from hotter, northern neighbouring states like Zambia, Zimbabwe or Mozambique to South Africa. Moths lay their eggs in clusters of 100 to 400 and a single female can lay up to 1 000 eggs.

Eggs hatch within three to six days, depending on temperature and humidity. Larvae become about 25 mm long, appear to be black, with green/yellow strips down the length of their bodies and have a characteristic V-shaped mark on the head capsule. Mature larvae become pupae in the soil

Armyworm larvae have to be identified timeously for effective control. If larvae are only observed when they are almost fully grown, it is usually too late for chemical control, as damage has already occurred and a second generation will not necessarily appear.

Where larvae are still moving from one field to the next, a furrow can be ploughed in which larvae are caught and can then be covered or controlled by chemical means. The lesser armyworm occurs across the world and the larvae can also migrate in masses, but it is not certain whether this phenomenon has been observed in South Africa. This species can occur in two phases, namely a migration phase during which they have a darker colour, or a solitary phase.

The solitary larvae are usually found in the whorl of maize seedlings in a C-shaped, curled attitude. The larvae are green, with a greenbrown head, and grow to a size of only about 15 mm on maize. Although the colour of older larvae in the migratory phase can vary considerably, they usually have a dark colour.

The moth of the lesser armyworm is pale grey, with brown markings on the forewings. The hindwings are white, with dark veins. The moths can lay up to 600 eggs in clusters of 30 to 100 on other plants, but this is usually not the case on maize.

Such a large number of larvae seldom occur on maize, where they usually occur singly. The larvae become pupae in pupal cases in the soil and moths appear ten to twelve days later. This species seldom reaches pest status on maize.

The fall armyworm that recently arrived in South Africa occurs widely in North and South America. This pest feeds on a large variety of plants, but prefers grasses and grass crops. However, it can also cause major damage to groundnuts, soybeans, cowpeas and wheat. The larvae grow very quickly and eat large holes in leaves, or even the entire leaf. 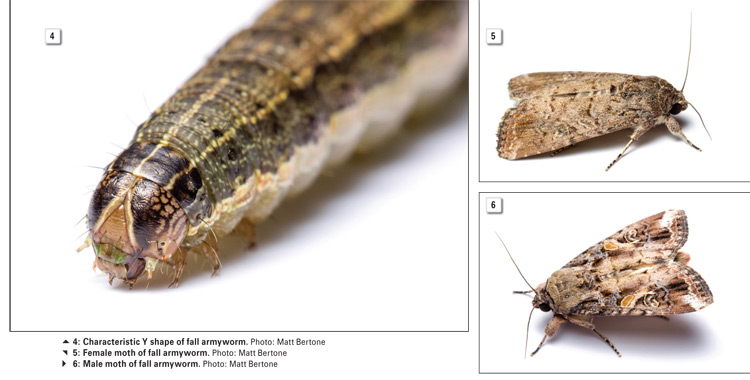 The larvae initially have a green colour, which changes to a greenbrown colour as they mature. The larva has a characteristic Y shape (Photo 4) on the forehead. The larval stage can last between 16 and 30 days, depending on temperature and humidity.

The fully grown larva becomes a pupa in a pupal case in the soil. The moth emerges after about a week and lays eggs on vegetation around grass areas. The female moth (Photo 5) can be clearly distinguished from the male moth (Photo 6).

Producers should therefore look out for outbreaks of armyworm. A good indication in the field is the flocking of birds in pasture, where they feed on the larvae. If any such outbreaks occur, clear photographs should be taken and the AR -Grain Crops Institute (ARC-GCI) should be informed. As soon as an outbreak is reported, the species will be identified.

For more information or to report outbreaks, call Annemie Erasmus on 018 299 6113 or ErasmusA@arc.agric.za.

We would like to thank Matt Bertone (North Carolina State University) and Diedrich Visser (ARC-Roodeplaat) for the outstanding photos.