Awareness of environmental damage caused by chemical insecticides, several cases of insecticide resistance being reported annually against different groups of insecticides and strict regulations associated with chemical residues on harvested commodities have prompted a renewed interest in the development of more environmentally-sound pest control strategies.

Insects are prone to infection by fungi, known as insect-pathogenic fungi, and the latter has been assessed as insecticides for more than 100 years. However, only a few products have reached the market, regardless of their potential. Biological control of cereal aphids, such as the Russian wheat aphid (Diuraphis noxia), oat aphid (Rhopalo siphum padi) and rose grain aphid (Sitobion avenae), using insect-pathogenic fungi, holds much potential as these insects are sap-feeders and fungi (as opposed to viruses and bacteria) do not need to be ingested to cause infection.

The fungal spore, or conidium, which makes contact with the insect cuticle, will germinate under favourable conditions and infect the host by penetrating through the cuticle. Once inside the host, the fungus can produce toxins and/or destroy internal organs leading to death of the host, usually within four to five days. 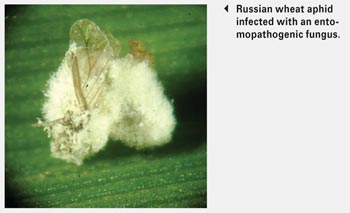 After death, the fungus may emerge from the insect cadaver and produce new spores on the surface of the insect, thereby increasing the chances of other healthy aphids becoming infected (Photo 1). A more detailed overview (in Afrikaans) of insect-pathogenic fungi was published in SA Graan/Grain, September 2014, Vol 16(9). There have been no reports of resistance development against insect-pathogenic fungi thus far. These fungi are non-lethal to humans and animals and leave no unwanted residues on the harvested commodity.

Constraints in implementing insect-pathogenic fungi as a component of an integrated pest management (IPM) programme relate to a relatively slow killing-rate and unpredictable results under field conditions. Aphids also have the ability to rapidly increase in numbers, thereby “escaping” the disease and successfully establishing pockets of healthy aphids leading to new outbreaks.

Research at the ARC-Small Grain Institute (ARC-SGI) is now focussing on the combined use of insect-pathogenic fungi with sub-lethal doses of insecticide. Reduced doses of the chemical insecticide act only as stress factor to render the insect more susceptible to the disease. Without chemically-induced mortality, selection for resistant aphids is minimal.

Moreover, in the presence of the fungus, these stressed aphids are killed more easily, while the diseased insects lose their ability to withstand even the lower chemical dose they are exposed to. Together, synergism between the chemical and fungus is noted, with detrimental consequences for the pest. Other stress-related effects that can be observed following exposure to reduced doses of insecticides include reduced fecundity, i.e. inhibited reproduction, the inability to mate, reduction in body size, and/or antifeedant behaviour. Research is currently being conducted to test the compatibility of insect-pathogenic fungi with various contact and systemic insecticides registered against cereal aphids in South Africa. Although compatibility has been noted, some chemicals have a deleterious effect on the fungus, inhibiting germination and/or vegetative growth. On the other hand, some chemicals may actually stimulate fungal sporulation and general development, thus enhancing overall fungal performance. Ultimately, effective combinations require an understanding of the interactions between the fungal and chemical agents involved. The fungus Beauveria bassiana has a wide host range and has been studied extensively as a microbiological control agent against numerous insect pests.

The ARC-SGI curates >400 indigenous strains of this fungus, enabling wide-scale screening to identify suitable candidates for further development. The chemical actives, pirimicarb, dimethoate and acetamiprid, were found to be compatible with a strain of B. bassiana and will be used in field trials during the 2015/2016 season. Although immediate “tank mixtures” of the insect-pathogenic fungi and (sub-lethal) chemical insecticide is the approach that is now being explored, alternate or staggered applications also hold po tential. If, initially, a full-dose systemic insecticide is applied, follow-up applications of the insect-pathogenic fungus (only) may be directed at later aphid populations challenged by the weakened or “diluted” systemic effect of the chemical.

Such populations would be expected to be only partially affected by the chemical, now acting in a sub-lethal manner. Again, these populations would be stressed by the chemical, rendering them more susceptible to the fungus. The importance of aphid control within the small grain industry is underscored by the periodic occurrence of new resistance-breaking Russian wheat aphid biotypes (four such biotypes are currently recognised in South Africa; RWASA1 - RWASA4), as well as the growing problem of aphid-transmitted barley yellow dwarf virus especially by the oat aphid.

Chemicals continue to play a pivotal role in aphid management, but the environmental footprint needs to be better managed. Combined use thereof with insect-pathogenic fungi is a sensible strategy, warranting further research.