INDIFFERENCE - THE END TO PROGRESSION 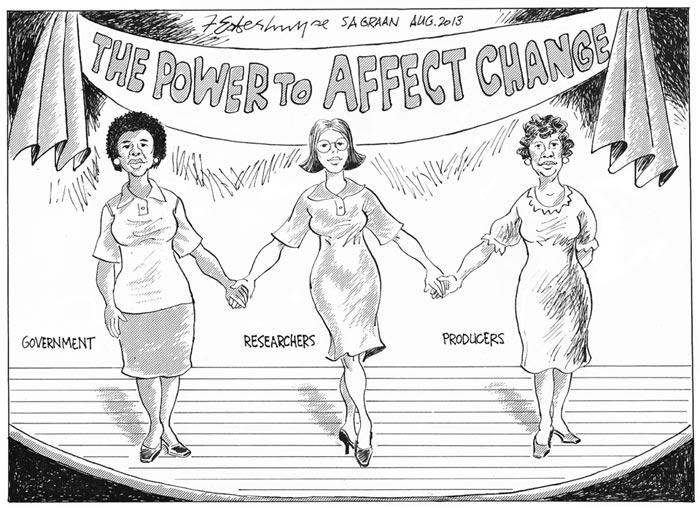 The definition of indifference is the lack of interest or concern for something or someone and the unwillingness to get involved. We all have a part to play in sustaining this beautiful country.

We have seen in our history that indifference on all levels has led to self-promotion and discrimination, the haves and the have not’s which ultimately divided and almost destroyed us. Fortunately, we have been given a new start to take from the past what was good and form new ideas for the future. This process cannot begin without tolerance and understanding, a willingness to look at the bigger picture and focus on the end result.

The grain industry is no different. The end result is food security and sustaining a thriving industry that can compete on a global level. We have the infrastructure, we have the governmental departments, we have the resources, we have the skills and we have the producers.

Let’s look at the policymakers, the government – the entity given the authority to put in place policies and procedures to ensure the sustainability and growth of the industry. Perhaps if we took out the word “ensure” and replaced it with “assist with” it would better describe what their role should be.

Whilst they do have the power to make major decisions and put into place legislation which sculpts the industry, often the focus is not on the issues needing the most attention. To “assist with” the development and progression of the industry, they need to know what the needs are and what the reality of the situation is. If the policymakers were more informed and engaged with producers and researchers to understand the operational side of the industry, then perhaps the bureaucratic red tape would not be as hard to cut through, funding would be invested in relevant projects and responses and decisions to critical matters would be received much more promptly.

Researchers have an important role to play in the industry value chain. They have the ability to bridge the gap between the producers and the policymakers. Whilst there is gross underspending in public research, their work could greatly assist the government to make the right decisions and policies which will benefit the agricultural industry as a whole.

If the scientists follow their mandate and purpose then their research will ultimately contribute to the improvement of food security and competition, attract future investors in public research and development and carve a positive image of the grain industry in South Africa. A key concern at this stage is local capacity building and succession planning. To ensure future research and development, it is important to maintain and continuously supplement the current institutional memory. The grain industry cannot progress without essential research and the availability of adequately trained researchers.

Producers have long since been regarded as the backbone of any country in terms of food security. Yet often they underestimate the influence they have. By making their needs known and lobbying policymakers and researchers they could encourage positive and necessary changes in the industry.

However, just as the policymakers and researchers need to understand the issues facing the producers, they in turn need to be aware of and understand how the government operates, its policies and procedures, its political views and standpoints and the protocols it has in place with regards to agriculture. Producers should get involved with the policymaking, with their local government or municipality and their communities. They have the power to affect change in rural South Africa through lobbying and influencing local authorities.

Each key role-player in the grain industry value chain has the unique ability to use their talents and influences to affect a positive change for the greater good of the whole country. Accepting this responsibility and believing that we can make a difference to the outcome of our future, is half the battle won against indifference.