Incidence of root-knot nematodes on weeds in South Africa

Root-knot nematodes (Meloidogyne spp.) are the most widespread and damaging of the plant-parasitic nematodes worldwide and they survive and even thrive on weeds.

They are well-known for their widespread distribution and extremely polyphagous nature with more than 3 000 plant hosts, including crops, ornamentals, medicinal and aromatic plants as well as weeds. They are favoured by warm temperatures that are prevalent in the tropical and subtropical regions.

However, some species are able to adapt to local climatic conditions and may be found in temperate climates. The most commonly occurring root-knot nematode species in South Africa are M. incognita and M. javanica. The aboveground symptoms of root-knot nematode infection are often mistaken for nutrient deficiency symptoms. It is a fact that agricultural fields will inevitably have weeds and most producers and agricultural scientists view weeds as an independent problem, since weeds compete for water, nutrients, light and space, which reduce crop growth and yield.

Although competition is the most important effect weeds have on crop production, weeds are part of the ecology of a field and can have other less obvious effects, such as serving as a reservoir for insects, diseases and nematodes.

The importance of weeds as nematode hosts

The host status and degree of nematode reproduction on weeds is a major concern in developing and implementing integrated nematode management programmes because weeds are present during crop growth and afterwards with the fallow period.

Weed control is often conducted relative to weed populations and threshold levels established to manage weed/crop competition. Nematode reproduction on weeds may seem to be a simple problem to solve, with the solution simply being to control the weeds, particularly during the off-cropping season. However, this could lead to increased grower cost, greater soil erosion potential, less nutrient recycling and lower soil organic matter levels.

It is essential to highlight that without a weed management programme in place for both in-season and off-season periods, the benefits of crop rotation for nematode management won’t work or function due to weed hosts of plant-parasitic nematodes. 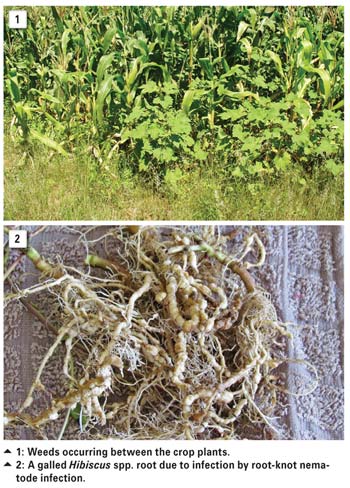 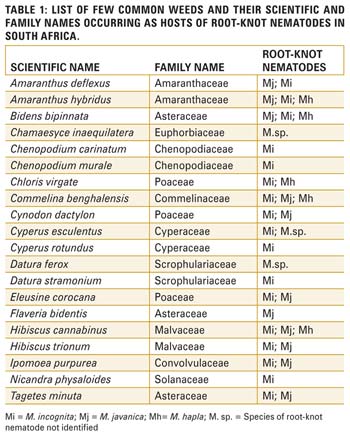