The poultry industry is currently under enormous pressure. As explained in various reports, this is due to not receiving sufficient anti-dumping support. In December last year, the Department of Trade and Industry announced a 13,9% safeguard.

According to various role-players within the poultry industry this is not sufficient in order to ensure the sustainability of the poultry industry. The lack of support resulted in producers decreasing production and even ceasing chicken production, due to the fact that it is just not possible to compete with the imports.

The local industry can compete on a whole bird basis, but not in terms of cut imports. However, this is also not a very favourable scenario for the grain industry, mainly because the poultry industry is a very important market within the grain and oilseeds value chain.

In terms of feed produced from grain and oilseeds, the broiler and layer industry consumes 32% and 11% respectively. This is almost half of the market. Graph 1 explains the importance of the poultry market within the grain and oilseeds value chain.

As much as 4,6 million tons of feed are consumed by the local broiler and layer industries within a year. The broiler industry’s feed composition will consist of 81% oilcake and full fat products and 9% grain and grain by-products. This is a total of 90% grain and oilseeds-related (Graph 2).

This would be 78% grain and grain by-products, 19% full fat and oilcake and 3% other raw materials (Graph 3) is for layers. For layers, 97% of the feed composition is linked to the grain and oilseeds industry. 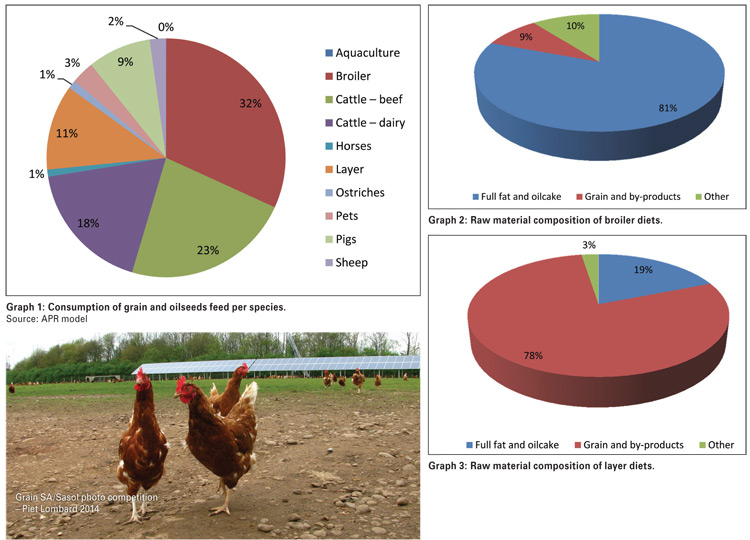 The effect that additional imports of chicken meat will have on the volume of raw materials required for animal feeds in South Africa, was simulated by De Jager (2016).

Additional imports of 65 000 tons of chicken meat per year not subjected to any import tariff, would cause an average annual decrease of 1,41% in demand for total raw material, while the yellow maize demand is projected to decrease by 1,43% annually.

The total protein consumption is projected to decrease 1,89% annually if the additional chicken imports occur and less local production is needed.

Putting it in a broader perspective, the annual raw material demand for animal feeds was only simulated on imports of 65 000 tons of chicken meat per year. Chicken meat imports to South Africa has increased sharply over the past two years (2015 and 2016) and the chicken meat imports for the first ten months (January to October) of 2016 accumulated to 449 592 ton. The average imports for 2015 and January to October 2016 were 453 483 ton.

Under normal circumstances South Africa is a surplus producer of maize. Over the past ten years the production of maize has also increased and created a surplus. This means that the expansion and creation of new markets are very important for maize producers to ensure they are sustainable in the long run (Graph 4). 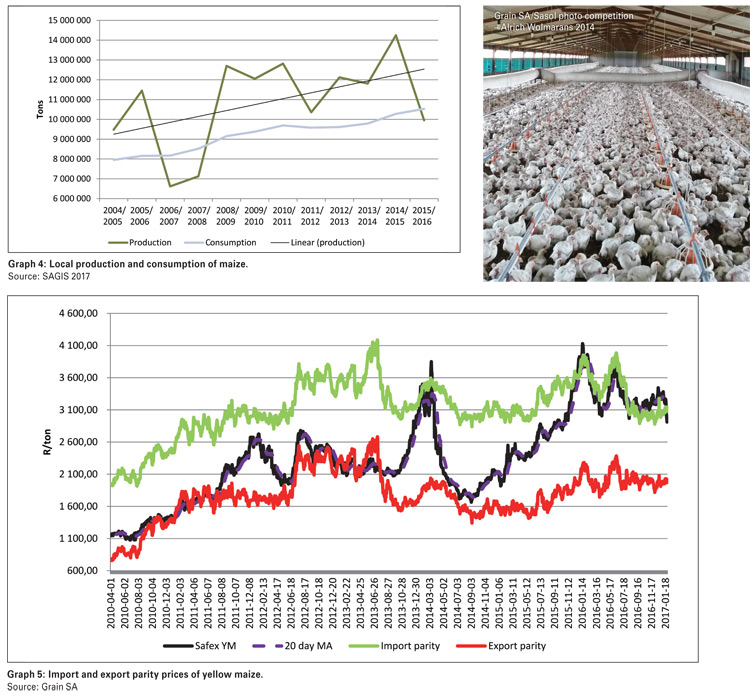 Soybean production in South Africa has also increased over the past few years. In addition, the local demand increased due to large investments within the local processing capacity. This means that it is very important to develop and sustain a local demand for oilcake, otherwise these expansions will not be sustainable in the long run. As indicated above in terms of feed within the oilseeds industry, the broiler industry is very important for the consumer. In terms of feed prices, the drought and the dependency on imports resulted in price increases. This resulted in prices moving from low export parity prices to high import parity price levels.

However, historically under normal conditions yellow maize prices traded at levels closer to export parity levels due to surplus production, which means that this is favourable in terms of feed prices. The expectations are that prices can move closer to export parity levels again if crop conditions are favourable in the new production season, providing there is some relief in feed prices.

In conclusion, the poultry industry is a very important role-player within the grain and oilseeds value chain. If local poultry production decreases due to producers not being able to be competitive against imports, this will not only have an impact on job creation and economic opportunities within the poultry industry, but it can also have a multiplier effect on other industries such as the grain and oilseeds industry.

This is mainly due to the fact that the poultry industry is an important consumer within that value chain.