IMPACT of weeds and nematodes on crop production

The role of weeds as hosts of other pests affecting crops does not only have an indirect effect, but also has an economic impact on crop production. Weeds serving as pest hosts in the absence of crop hosts are reservoirs for those pests, maintaining pest populations, which are available to attack crops when planted. Plant-parasitic nematodes cause tremendous yield loss on most cultivated crops worldwide. In South Africa, the root-knot nematodes, Meloidogyne incognita and M. javanica in particular, have been declared economic pests of most crops with a wide host range, including weeds. 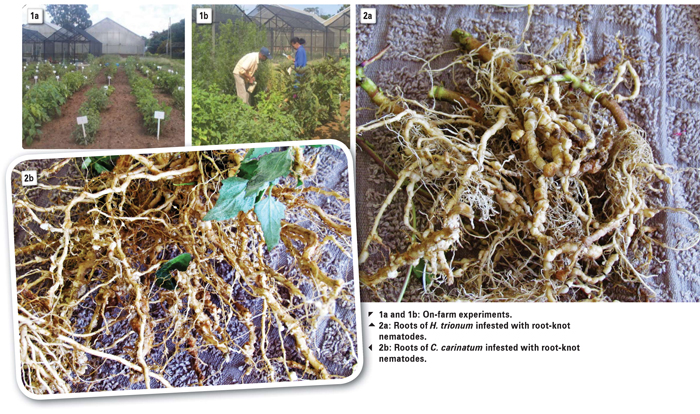 Outcome of on-farm experiments
Meloidogyne spp. dominated in root (5 g and 50 g) and soil (200 ml) samples obtained from the three on-farm experimental sites. Although other plant-parasitic nematodes such as Pratylenchus spp. and Hoplolaimidae were also present in 5 g root samples and the latter species as well as Criconema and Tylenchorhynchus were found in 200 ml soil samples, their population levels were relatively low and warrant no further discussions for the purpose of this study.

At Kuruman, Solanum retroflexum was the most susceptible weed to a M. javanica population, while the same was evident for H. trionum at Nelspruit, where a mixed population of M. incognita and M. javanica occurred and at Potchefstroom, where a population of M. incognita was present. Results from this study indicated that certain weed species are highly susceptible to root-knot nematodes and should be removed timeously and effectively to prevent increases in population levels of root-knot nematode pests in the fields of producers.

Although T. minuta is generally being referred to as a non- or poor host for a variety of nematode pests, results from this study showed that it has the potential to serve as a good host for monoculture M. javanica populations as well as mixed populations of M. incognita and M. javanica. 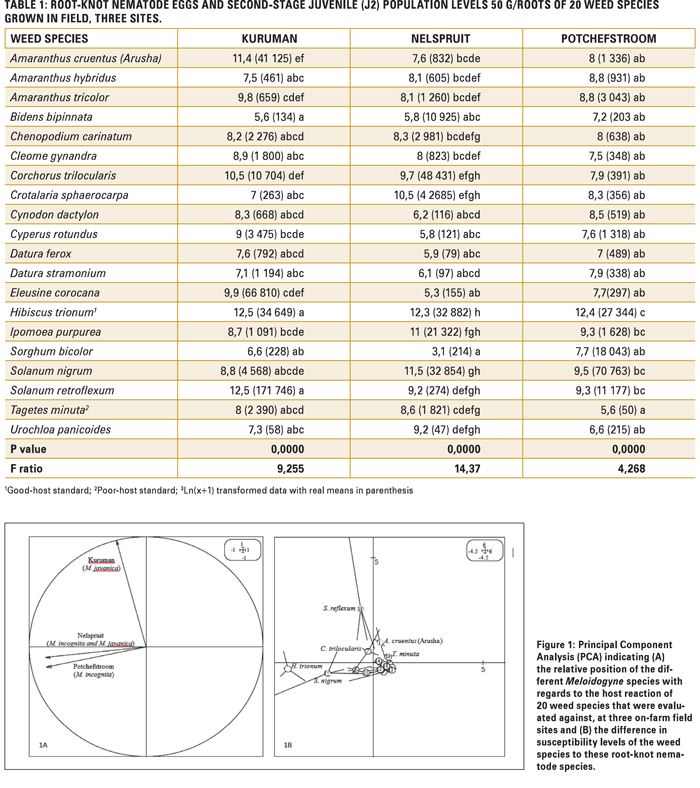 Future prospects
Notwithstanding this study on weeds, variable host efficiency of root-knot nematodes has been demonstrated for a range of crops by other authors. A probable explanation for this is the exposure of weeds to different populations of M. javanica and M. incognita and/or mixed root-knot nematode species (M. incognita and M. javanica) as a result of our study.

The occurrence of mixed root-knot nematode species populations in particular is experienced in South African agricultural soils, where M. incognita and M. javanica often occur together.

The phenomenon of variable host suitability needs to be studied extensively by screening the weed species to different populations of Meloidogyne species, since such an approach will provide more insight in this regard.