In South Africa, about 455 species have been reported. However, Meloidogyne spp. (root-knot nematodes) is the economically most important pest parasitising most crops followed by Pratylenchus spp. (lesion nematodes). Although information on their economic impact remains less than comprehensive, collectively they pose an important constraint on the delivery of local food security particularly for crops produced in subsistence farming areas.

Weeds on the other hand, do not only compete with crops for space, light and nutrients (Photo 1), but may act as hosts of other pests, thus, posing economic yield losses on crop production.

Crop and quality or yield losses due to plant-parasitic nematode parasitism are usually more serious in subsistence farming communities than in first world countries. This is particularly due to knowledge gaps as well as the limited availability of infrastructure and finances existing in the subsistence agricultural sector.

Damage caused by plant-parasitic nematodes often goes unnoticed or are attributed to other growth limiting factors, due to lack or absence of above-ground symptoms and ignorance by producers. The nematode problem is furthermore aggravated in the developing agricultural sector due to limited and marginal land available to grow food crops and the traditional use of cultivars that are susceptible to PPN in multiple cropping and intercropping systems (Photo 2a - b).

Control measures
It is crucial to identify the effective and compatible integrated pest management strategies that will address both weed and nematode management collectively, in order to prevent population build-ups of target nematode pests. Weeds generally reduce the efficacy of crop rotation aimed at nematode management.

In addition, some weeds that serve as a supplementary food source, may not be intentionally removed by producers, but rather be semi-cultivated along with a given staple food crop. This inevitably leads to a build-up of PPN populations and eventually the main crop suffers damage while producers are unaware of the situation. 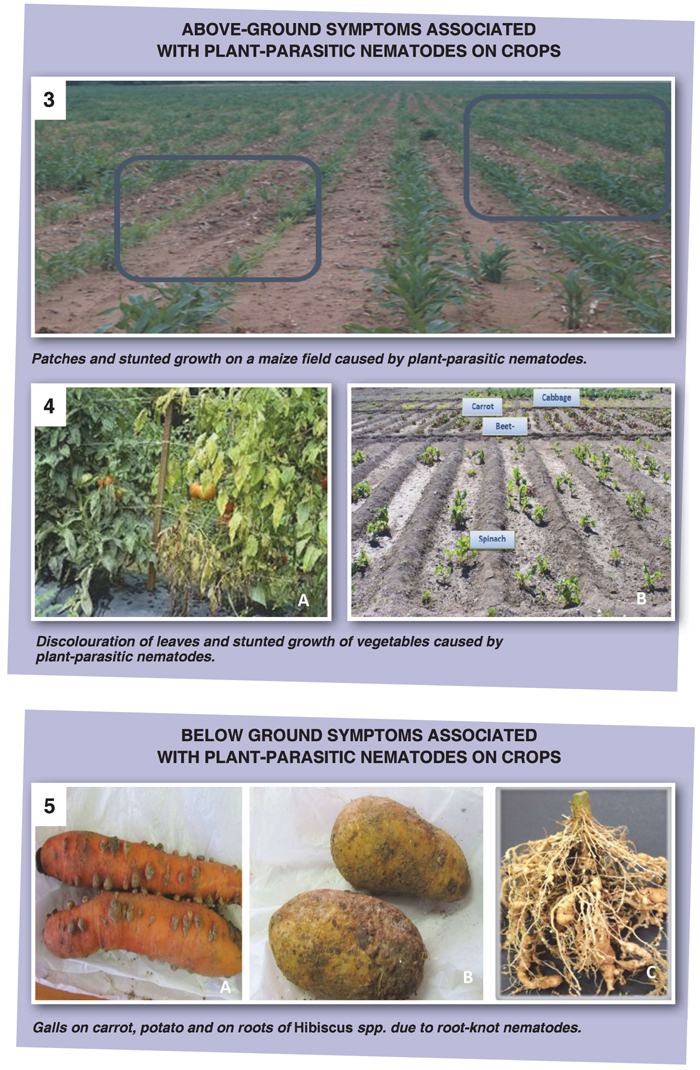 Control strategies may include one or a combination of the following: