The honourable minister of Agriculture, Forestry and Fisheries, Mr Senzeni Zokwana (59), dedicated time in his busy schedule to answer questions put to him by the SA Graan/Grain editorial team. Here he speaks openheartedly about the fact that for him, farming is a way of life; how he sees the way forward for farming in our country, and the fact that he wants to be remembered as an agricultural activist.

Tell us more about growing up in the Eastern Cape?
Like all boys in the rural villages I grew up looking after family livestock. Children growing up in rural villages and homesteads participate in the planting, ploughing and harvesting of maize which is the staple food for many rural households.

Are you a family man?
Yes, I am married and have six children, three boys and three daughters. I do not have grandchildren yet, but I am blessed to see my children grow up.

What is your motto in life?
“Live and let live,” South Africans have achieved a lot more under peaceful existence than all the years of strife we endured. I believe there is always a better way of doing or achieving something and still being civil about things.

Do you cultivate crops or livestock?
I do not identify myself as a farmer, nor do I communicate that about my homestead. I am merely continuing the legacy given to me by my father, and his father before him. We have always been a people of production and land tenure; this is the legacy I want to leave my children. The land is to be worked and is a valuable source in feeding the people of South Africa.

I have 45 goats, 120 sheep and 34 cattle; I also cultivate maize, potatoes and other vegetables; all for family consumption and helping my community when the need arises.

What makes farming special for you? Why did you decide to invest in agriculture?
Farming is a way of life, not necessarily a career choice, though many commercial farmers contribute valuably to feeding the country. I farm because I grew up in a rural setting where one grew his own food, meat came from livestock, and we hardly bought food.

Times have changed and almost everything these days can be outsourced, this has brought a challenge of not getting enough young people being interested in farming, commercially or otherwise. I invest in agriculture because I want to lead from the front and work the land; I am in solidarity with farmers when drought hits, certain diseased that attack livestock and various other factors that affect the industry, a minister that farms is a minister that understands. 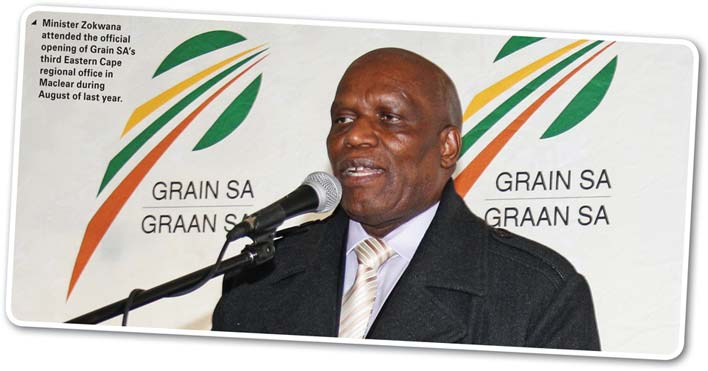 At present, the government does not subsidise any of the above. However, I feel support and growth initiatives should be provided for all citizens in agriculture and those with real interest to get involved in agricultural activity.

What challenges does the South African agricultural industry face and how can it be addressed?
Access to land is currently the biggest challenge to citizens with an interest to farm, as arable agricultural land takes precedence in its preservation and in ensuring it is used to secure food for the nation. Citizens have various intentions for land which might not necessarily be at par with the government’s intentions in land redistribution.

We cannot give land for the sake of giving. We need to ensure the stability of food production, transformation of the agricultural sector and that the skills and processes involved in the sector are preserved, transferred and taught to cater for a long-term sustainability of food production. Input costs into producing certain crops hamper high yielding of these crops. This factor can be overlooked sometimes and it is of a vital nature.

Access to markets for farmers in the industry is already a challenge we take seriously as a department. When the weather has been good for a particular produce, farmers need to be able to export their produce to markets where favourable pricing and conditions exist for trade. Current markets are being re-evaluated for expansion or re-entry if we do not currently trade in those markets.

Global competition in certain produce that South Africa also produces has hampered South African products getting a fair market share due to phenomena such as global dumping, e.g. chicken from Brazil. Certain market blocks also subsidise their products to such an extent that domestic agriculture suffers. As a department we are looking into long-term solutions for all these occurrences.

Securing sufficient and affordable food for the people of South Africa is becoming increasingly important in your portfolio as minister. What are your views on food security and how the challenges surrounding it can be addressed?
Promotion of family food gardens is a key component of getting citizens to contribute to food security and to become less price takers in the market. If all households had a vegetable garden, there would be less hunger and malnutrition in the country, unemployment would go down as certain members of the family/community would then take up the responsibility full time. All conditions conducive would yield a greater number of commercial farmers which will contribute to the GDP of the country.

This may sound too simple, but it addresses collective contribution to a problem that belongs to everyone. Food security is not a commercial farmer’s problem, it’s our problem as a whole and we all need to collectively do our part in the solution implementation.

What is preventing new entrants to farming and/or developing farmers from reaching their goals? What should the government and the industry do to remove these hurdles?
Access to land is inherent to the progression of the agricultural aims of the country. To those willing to buy land, the cost is not easily reachable by the ordinary man on the street. Government has various interventions to try and bridge the gap in accessing land and raising capital, but more needs to be done.

Extension officers are a strategy not adequately exploited in agricultural support initiatives. Extension officers can offer help: From the budding farmer – whether they have commercial intentions or not – to the most experienced farmer in time of need.

Regarding land reform in South Africa, what is on the cards for the following 12 to 18 months and what message do you have for all grain producers?
Agriculture and food security are national priorities, the country will address land reform as it has done with all other issues; in an inclusive manner. This, however, will not in any way put at risk current food production in the country. Arable land not being utilised will be looked into for land reform – that needs to be understood clearly.

When your term as Minister of Agriculture, Forestry and Fisheries is completed, what would you have wanted to achieve and how should people remember you?
I would like to be remembered as an agricultural activist who brought agricultural issues home to the ordinary man on the street.

I would like agriculture to become the reason that the whole South Africa will not be hungry, eradicating malnutrition, increasing the sector’s GDP contribution, maintaining sustainable job creation in the sector and inspiring young people to enter and be successful in the sector.