How do we compare with "down under"?

Concern has been shown about the persistent decline of areas sown to wheat in South Africa. In 1982, South Africa cultivated more than two million hectares of wheat and have ever since declined to 482 000 hectares in 2014 with the majority of the area lost in the summer rainfall region, or more specifically, the Eastern Free State (Graph 1). 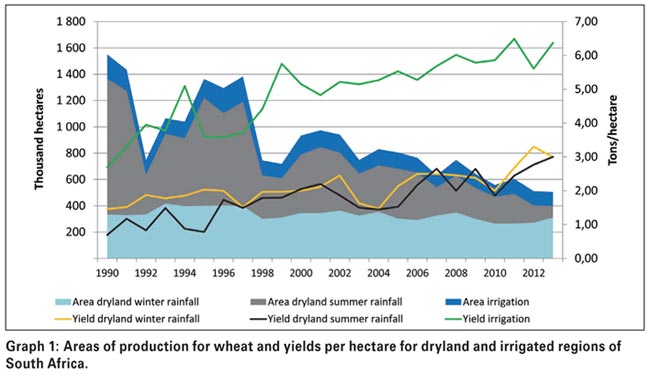 A number of drivers have influenced this reduction over the past three decades where profitability, production risk and more favourable alternative crops were the main contributors.

Technology in maize and more recently, soybean seed varieties led to a steeper increase in yield levels which favour these summer crops above wheat production. Currently, the question is being asked whether climate change has influenced traditional precipitation during key growth stages of wheat in the Eastern Free State, forcing yield and yield growth trends downwards.

Furthermore, the adoption of conservation and rotational farm practise in the Western and Southern Cape, led to a consolidation of hectares between wheat, barley, canola and pasture crops.

Graph 1 illustrates the loss in area over the past two decades and in particular, the summer rainfall region. The graph further illustrates the yield trend for dryland and irrigated wheat.

In the following graphs, comparisons are made between South Africa and Australia for total production, yield per hectare and US$ value per ton for the period from 1990 to 2014. It is projected that Australia will produce more than 24 million tons of wheat in 2014 under approximately 13,83 million hectares compared to 1,68 million tons of wheat in South Africa under 482 000 hectares (Graph 2). Area under wheat production has increased from 9 million hectares in 1990 to 13,83 million in 2014. 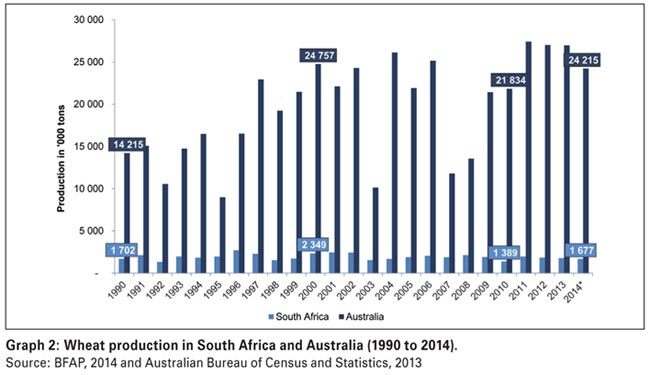 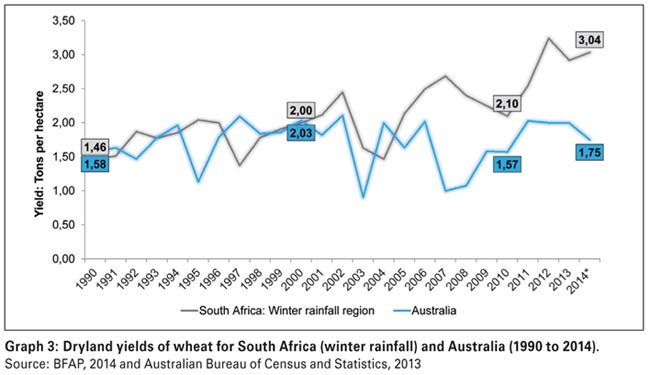 The price in US$ per ton for South African wheat is greater than for wheat grown in Australia (Graph 4). The reason is that South Africa is a net importer of wheat; whereas Australia is a net exporter. The average wheat price in 2013 in Australia was US6 per ton. In the same year, South Africa obtained an average Safex price of US2 per ton. 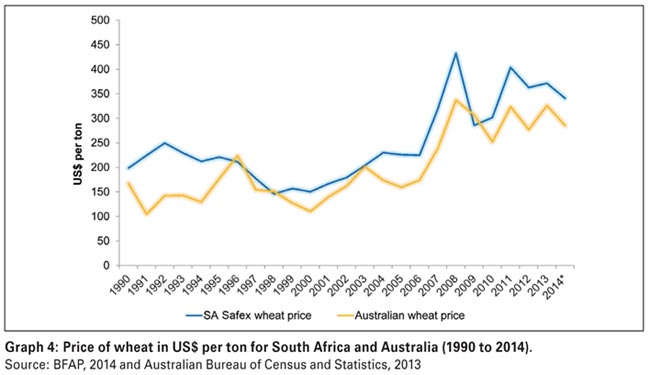 Agri benchmark is an international network of agricultural experts, advisors, producers and agri businesses aiming to understand production systems, benchmark costs and who measures farm practises across the globe.

More than 30 countries currently form part of the network in order to compare and benchmark farms globally from both a financial and technical perspective. In the following section a comparison is made between wheat farms in Australia’s wheat belt and South Africa’s Overberg, Eastern Free State and Northern Cape irrigation producing regions. 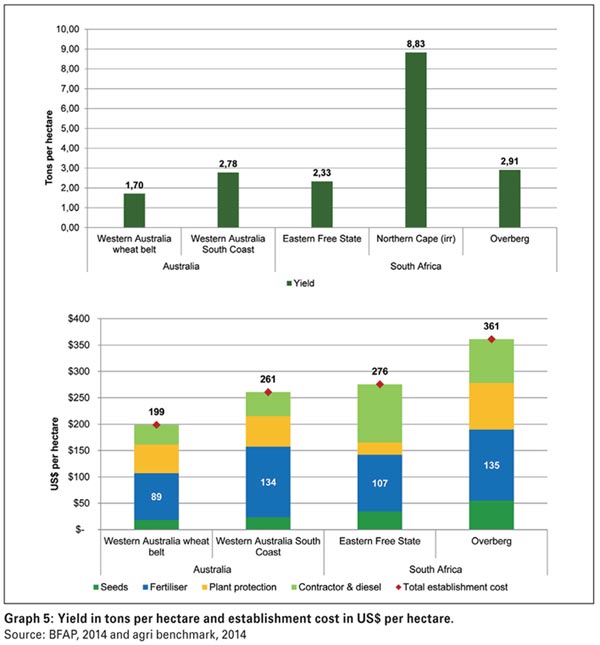 The graph further shows the establishment cost per hectare for the two countries which include the cost for seed, fertiliser, plant protection and operating costs. The results refer to the following period:

Graph 5 demonstrates that from a yield perspective, South Africa performed well against Australian farms where the Overberg region had outperformed both Australian typical farms.

The Eastern Free State farm with an average yield of 2,33 tons per hectare had outperformed the Australian wheat belt farm, but not the South Coast farm that is situated in a high rainfall region and is more representative of a typical western Australian farm.

Graph 6 represents the key technical parameters between the two countries and illustrates fertiliser and seed application rates along with nitrogen technical and economic productivity indicators. 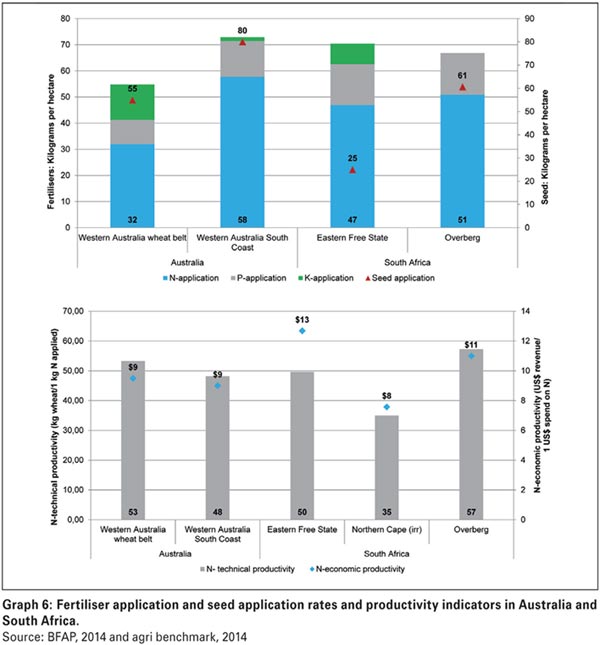 In the Overberg region, for every kilogram of nitrogen being applied, a total of 57 kilograms of wheat was harvested compared to 53 kilograms of Western Australia and 48 kilograms in the South Coast region. Furthermore, for every US$ spend on nitrogen on Australian farms, a total of US was obtained in revenue (wheat sold). In South Africa this indicator varied between US on irrigation farms to US in the Eastern Free State.

Graph 7 illustrates the relative competitiveness of production costs in South Africa and Australia on a per ton basis which illustrates the establishment costs to produce one ton of wheat. 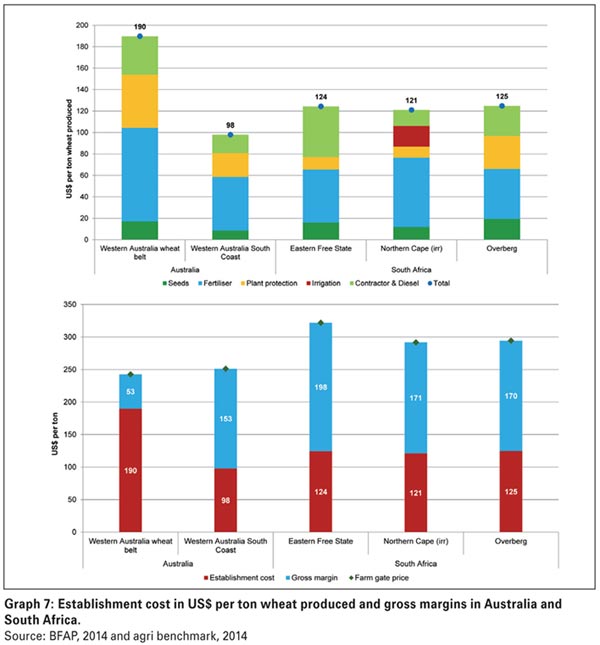 Yield is therefore integrated in the comparison. In a global environment, it is essential to know who can produce a crop the most cost effectively and efficiently. The second graph illustrates the gross margin levels on a per ton basis, where the red bars show the establishment cost and the blue bars, the gross margin per ton.

From Graph 7 it is evident that South African farms can compete against Australian farms as seen from a cost perspective. On average, it will cost an Eastern Free State or Overberg producer about US5 to produce one ton of wheat where in the South Coast it will cost a producer US per ton. The lower yield levels on the Western Australian wheat belt farm caused the per ton cost to increase significantly.

Although wheat grown in South Africa enjoys a higher gross margin than that produced in Australia, the extra benefit is not large enough to offset the large comparative advantage that Australian producers receive in having huge economies in size of production compared with those of South African wheat producers.

In Australia, according to the Australian Bureau of Agricultural and Resource Economics (ABARE), in 2011 the average area of wheat per producer grown by 29,786 Australian producers, was 453 hectares.

On those hectares each Australian grower produced on average 1,005 tons of wheat which was twice or 100% greater than the amount of 505 tons produced by each South African producer. Australian producers were more profitable because they were able to spread their overhead costs over a much larger number of units of output.

Thus, from the analysis one could ask the question why the area has declined substantially when local producers can compete against major global players such as Australia. This is due to a number of reasons. The long-term reduction in areas sown to wheat in South Africa was due to reductions in plantings by dryland producers in the summer rainfall region.

This is primarily due to a lower number of hectares being sown to wheat over time by producers in the Free State. Climatic conditions and more favourable returns in crops such as maize and soybeans in the Free State mitigated strongly against wheat production. 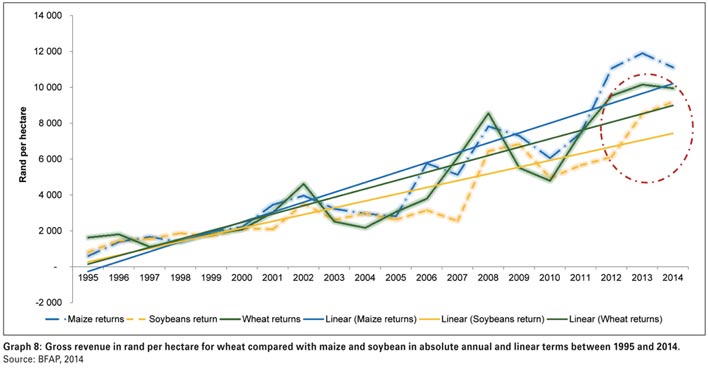 The comparison of the South African wheat producer compared with the Australian grower revealed that the latter continued to grow wheat and actually increased the area sown because they enjoyed large economies of size.

For example, in 2011, Australian producers had a comparative advantage over South African producers.

In that year, each Australian wheat producer grew twice as much or a 100% greater volume of wheat than that produced by each South African producer. This comparative advantage has continued to the present. It has led to them being more profitable because on average, each grower was able to spread their overhead costs over a much larger tonnage of output.