How compatible is entomopathogenic nematodes with other pest management strategies?

Entomopathogenic nematodes belong to the genera Steinernema and Heterorhabditis and have been successfully used over decades as safe biocontrol agents for the management of key agricultural pests.

Entomopathogenic nematodes are insect parasitic round worms, naturally occurring in the soil environment, and they actually comprise a symbiotic nematode-bacterium complex. The nematode may appear to be like a biological syringe for its bacterial partner (carried by the nematode in the gut), which is unable to infect a host on its own.

Nematode growth and reproduction depend upon suitable conditions established in the host by the bacterium. Conversely, the bacterium lacks invasive powers and is dependent upon the nematode vector to locate and penetrate suitable hosts. Entomopathogenic nematodes kill their host within 48 hours.

Nevertheless, entomopathogenic nematodes fit well into integrated pest management programmes for a number of reasons, such as:

The infective juvenile stage of entomopathogenic nematodes has proven to be compatible with many insecticides, nematicides, herbicides, fungicides, fertilisers, growth regulators, surfactants, pathogens, parasitoids and predators. In other instances, the nematode may or may not interact with these other agents with the relationship ranging from synergetic to antagonistic. Many combinations of entomopathogenic nematodes with other control agents proved to produce better control results than when using either agent alone. 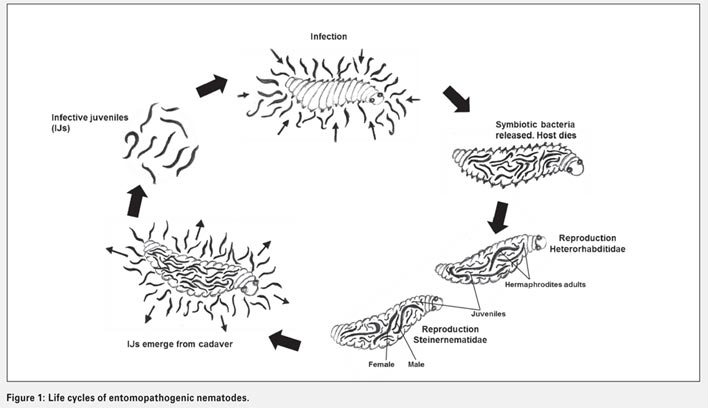 Bearing in mind that producers in South Africa rely on agrochemicals for pest management, the presence of entomopathogenic nematodes on commercial farms that were previously sprayed with agrochemicals may indicate that previous application of these chemicals may not have affected naturally occurring entomopathogenic nematodes. What can producers do to further conserve already existing entomopathogenic nematodes on their farms? They can concentrate on conservation biological control. The principle of which is based on the fact that existing natural enemies in an environment are already adapted to the habitat and to the target pest, and their conservation can be simple and cost-effective.

The conservation of natural enemies is probably the most important and readily available biological control practice available to growers. In many instances the importance of natural enemies is not noticed until insecticide use is stopped or reduced. Often, the best we can do is to acknowledge that natural enemies exist in our production systems and minimise negative impacts on them. If an insecticide is needed, every effort should be made to use a selective product in a selective manner. Entomopathogenic nematodes are naturally occurring in our soils. Their durable, non-feeding, infective juveniles can survive for months in soil searching for an insect host, infecting and multiplying by recycling in these hosts. In most cases, the grower will not notice this since it happens under the soil surface and entomopathogenic nematodes are microscopic.

The ARC-Small Grain Institute (ARC-SGI) is currently developing entomopathogenic nematodes based bioinsecticides for use against several soil-borne insect pests, including the black maize beetle, cutworms, false wire worms, wire worms and the pupae of the African bollworm, residing in the soil. A new species was recently discovered, called Steinernema innovation, for which a cost effective mass-rearing technique was developed by the ARC-SGI.

The cost reduction in production costs was up to 80% when compared to internationally available products. The next step towards commercialisation of this species is upscaling production, prototype formulation, testing prototype formulations against soil-borne insect pests under field conditions and registration under Act 36. Educating the end-users after registration will be equally important. Producers are welcome to send soil samples to test for the presence of entomopathogenic nematodes (at a minimal cost) to the ARC-SGI. For more information, contact Dr Tshima Ramakuwela at the ARC-SGI on 058 307 3455 or ramakuwelat@arc.agric.za.