When the South African Futures Exchange (Safex) Agricultural Products Division (APD) was formed in the early 1990s after the demise of the marketing boards, the support and direct participation of producers on the exchange were core to its long-term success.

A tremendous amount of energy and cost were spent by Safex and brokers to educate and sign-up primary producers. Most agri-businesses (ex co-operatives) also had broking divisions.

This campaign was extremely successful and a very large percentage of maize and wheat producers in particular opened a Safex account through a broker. It was not unusual for many of them to open accounts with different brokers. Collectively they had an incredibly important impact on the market.

However, after approximately 15 years, this is no longer the case. Industry sources have it that many, if not most producers, have either closed their accounts, have an inactive account, or have scaled down on their trading activities. This leads to the hypothesis that direct participation by producers on the JSE/Safex Commodity Division is declining. On the basis of a study conducted in the Western Cape, this article will investigate the trend and try to determine the reasons for the decline.

The role of Safex in the agricultural industry

This specifically applies to the JSE, which functions under licence of the Financial Services Board. The only licence currently issued for trading agricultural derivative products is in favour of the JSE, which operates a separate Commodity Division trading in agricultural commodities, among others.

It is thus important for the industry that the JSE operates a market where participation by all potential players is free, fair and transparent and that they have the support of core industry groups, including primary agriculture. Should this be the case, the justification of a single commodity exchange for a relatively small country like South Africa makes economic sense.

Alternatively, if there is a decline in producer participation, it is important to determine what the reasons for this are. Are there negative influences, or is it merely a natural evolvement of the market? It also holds secondary consequences for traders and agri-businesses and financiers whose clientele is taking on a different risk profile.

The primary data for this study was collected by means of a survey questionnaire containing both closed multiple choice and openended questions. The secondary data was collected through personal one-on-one interviews with brokers (grain traders and agri-businesses).

Reasons for using the Western Cape as the case study
The Western Cape is geographically isolated from the rest of South Africa since the Karoo separates the summer and winter rainfall production areas. This makes defining sample boundaries easier and clearer. The Western Cape crop production area and its stakeholders are thus in some way isolated from the rest of South Africa and it is for this reason that it was chosen as the sample area for this study. Unnecessary variables which could influence the results negatively could more easily be excluded from the sample and the data would therefore be much more accurate and easier to obtain.

The Western Cape is the largest wheat production province in South Africa. It also mainly produces wheat and to some extent barley in the Southern Cape, thus there are limited other crops that will influence the data and ultimately the results. Even the contribution of other farming enterprises such as livestock and deciduous fruits are limited in the wheat production areas. Furthermore, the pricing mechanism in the Western Cape is different from the other provinces since it is a local surplus production area. This is in contrast to the inland areas that are deficit areas. Thus gross income from wheat is typically less per ton and producers have to pay much closer attention to its pricing structure.

Feedback from the producer respondents are dealt with first, followed by that of the traders and agri-businesses.

Importance of wheat
At first it was important to establish whether or not wheat plays an important role in the Western Cape grain production areas. Survey results ascertained that overall (Southern Cape together with Swartland), 42% of producers depend on grain crops for 67% of their income. In the Southern Cape, crops make up 40% - 60% of gross income and in the Swartland, 75% - 80%. In the Swartland it was estimated that wheat contributes as much as 80% - 90% of the gross income.

Marketing and pricing strategy
This question in the survey attempted to determine at which stage of the season the producer prices (or sells) which percentage of his wheat. The response indicated that roughly half of producers inadvertently hedge themselves by spreading their risk evenly in the physical market throughout most of the year. The supposition that can be made is that they do not need a formal Safex hedging strategy. Their pricing methods strive to obtain an average seasonal price. The other half are more inclined to focus on certain time periods, hoping to cherry-pick some better prices.

Producers hedging directly on Safex
This section dealt with the core of the survey. The producer was first asked whether he currently has or whether he has ever had a Safex account.

37% of the producer respondents indicated that they had (or still have) a Safex account. Their view was not quite supported by the traders and agri-businesses if factored in over all of the Western Cape. If the view of the producers and those of the traders and agri-businesses are combined, an estimated 10% - 20% of producers across the grain producing areas of the Western Cape had Safex accounts.

The survey then endeavoured to determine the trading activity of the 37% of respondents (that indicated that they had opened a Safex account). This was done by establishing if there was an increase, decrease or no change in the active participation. Graph 1 depicts the response. 79% of once active Safex account holders said that their activities decreased. Of these account holders, 91% stopped trading altogether. 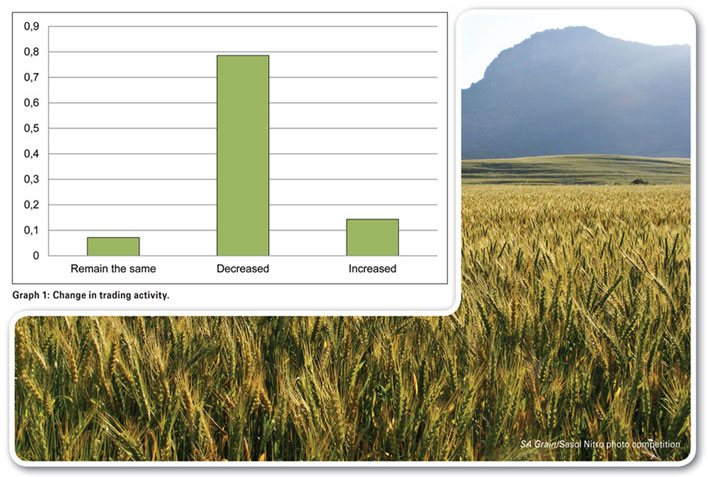 This was entirely supported by the traders and agri-businesses. A trader active in the Southern Cape stated that “there are only five producers on their books that hedge” and according to an agri-business, the number was “less than 5% in total”. Another institutional respondent estimated current producer participation in the Western Cape at 5% of which almost all are speculative in nature. A trader and an agri-business active in the Swartland, estimate participation (limited to a specific area) at “one producer” and “5% of which only one producer hedges”.

Cognisance should be taken of the fact that all traders and agri-businesses stated that they themselves have active Safex accounts.

They indicated cash flow requirements as the single biggest reason why producers have reduced (and completely stopped) their participation on Safex. The initial and variation margins were the first and third most important reasons given, respectively.

The second most important reason that producers picked, was that a producer could achieve the same benefits and more than could be obtained by trading directly on Safex, by making use of the services offered by the grain traders and agri-businesses. Although not included in the survey questionnaire completed by producers, the interviews with traders and agri-businesses identified these services as follows:

Other aspects that were highlighted by producers as reasons to rather work through traders or brokers, were the exposure to high price volatility on Safex, which goes hand in hand with short term cash requirements. Skills required to trade on Safex was rated second last, while broker commissions do not seem to be an issue at all, since it was rated last.

The surveyed results among traders and agri-businesses completely matched those obtained from the producers. Without exception, all rated the services offered by them as well as cash requirements, as the two most important reasons by far for not participating directly on Safex.

Brokers (traders and agri-businesses)
The next three questions dealt with the respondents’ view towards traders and agri-businesses. The following question might be singled out as probably the most important question asked in the survey, namely “Do producers believe brokers offer all of the marketing options that could be achieved by trading directly on Safex?” Having the benefit of already having analysed the response to the previous questions, the answer to this question (as depicted in Graph 2), might have been expected.

However, the response was overwhelming, 97% of respondents said brokers offer all of the marketing options they were interested in (keep in mind that if a producer’s knowledge about Safex is limited, there will be a higher tendency to respond positively on this question).

Nonetheless, the overwhelmingly positive response again confirms that respondents have no need to trade directly on Safex any more. Having established that brokers offer all the services required by the respondents, the survey now attempted to determine what these services are and how the respondents ranked them. Graph 3 depicts the top reasons for using a broker.

The broker or trader’s knowledge was singled out as the top reason by the producer respondents, followed by competitive prices offered by the trader or broker.

Producers’ view regarding brokers (traders and agri-businesses) could be summarised as follows: Wheat marketing is a specialised function and producers value the services offered by brokers. The respondents believe that the services offered by the brokers are sufficient, not warranting them to directly participate in Safex. As the top reason for using a broker, producer respondents ranked “broker knowledge”, while brokers themselves ranked “financing” as the top reason.

The survey and analysis of results confirmed that there is a sharp decline in direct participation by producers on Safex. As for the reasons, the decline is the direct result of the all-inclusive services offered by traders and agri-businesses.

There is an element of caution though. Given the importance of wheat in the Western Cape and particularly in the Swartland, producers could not walk away from their responsibility to acquire or maintain a minimum knowledge of the functioning of Safex. Irrespective of whether the producer deals directly on Safex or through his broker, knowledge now and in the future will hold the key to his marketing performance and cannot be replaced by using a broker.

This project was made possible by the funding of the Winter Cereal Trust. The complete report is available
on their website. The contribution of A. Nordier, C. du Plessis and J. Hartwigsen is recognised.